TMC and CPM accuse the saffron party of 'buying' support by distributing coupons of Rs 1,000 each among voters at Raidighi which went to polls on Tuesday 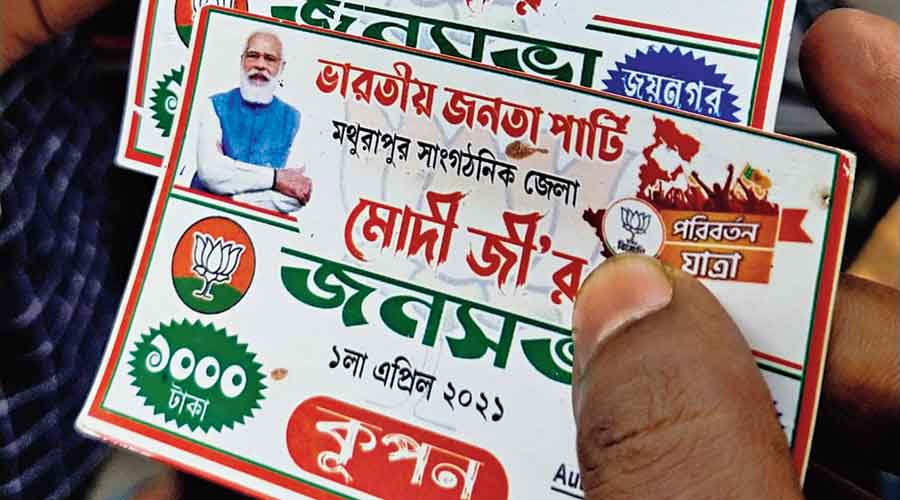 Either chief minister Mamata Banerjee has already transformed Bengal into “Sonar Bangla (Golden Bengal)” or campaigner Narendra Modi’s magic wand has done so in the past few weeks.

Otherwise, how can villagers at Raidighi in South 24-Parganas “donate” Rs 1,000 to the BJP against a coupon that mentions the amount and carries a picture of the Prime Minister?

The BJP claims the coupon is actually a receipt for donations to organise a meeting in Joynagar, also in South 24-Parganas.

But the Trinamul Congress and the CPM are accusing the BJP of “buying” support by distributing coupons of Rs 1,000 each among voters. Raidighi voted on Tuesday in the third phase of polling in Bengal.

Supporters of both Trinamul and the CPM said the local BJP leadership had promised them such a payment for attending Prime Minister Modi’s April 1 rally in Joynagar and for voting in favour of his party.

The villagers said the coupons were given to them as part of an offer of an “assured gift” for attending the meeting and also for voting in favour of the BJP.

The gist: the coupon is a receipt for donations towards a rally organised for the Prime Minister, not an IOU that can be cashed in exchange for rally attendance and a vote; it was meant for traders and the salaried but the party is now trying to find out how it ended up with poor villagers….

Late at night, Bapuli called this correspondent and said the coupons were also used to make payments to transporters ferrying people to the BJP’s rallies. “If a vehicle is hired for Rs 2,000, the transporter is given two coupons of Rs 1,000 each. After the rally, they come to us to collect the cash by handing over the coupons.”

Which confirms that the coupon can be cashed — a shift from Bapuli’s earlier explanation and a corroboration of one element of the version by the villagers who said they had been asked to attend the rally, vote for the BJP and collect the cash by producing the coupon.

The coupons drew wider attention during a visit to the area by veteran CPM leader and candidate Kanti Ganguly. The party’s supporters showed him the coupons, allegedly circulated by BJP workers in the area. Trinamul supporters too claimed to have received similar coupons from the BJP.

Printed by the BJP’s Mathurapur organising district committee, the coupons clearly mention the sum of Rs 1,000 but not the word “donation”.

While donations for political events are not uncommon, individual contributions of Rs 1,000 are unheard of, not just in rural India but even in urban centres. On the campaign trail in the state, Modi has been promising to turn Bengal into Sonar Bangla.

Bapuli, the BJP leader in Raidhighi, said: “The coupons were exclusively meant for donations to organise the Joynagar meeting…. It appears that the CPM and Trinamul have joined hands in fear of defeat and are acting desperately to malign our party. The BJP has no need to buy votes in Bengal.”

Asked whether villagers can afford to donate Rs 1,000 in a state whose government’s performance has been roundly criticised by the BJP leadership, Bapuli said the coupons were meant for traders and the salaried.

But even for the highly emotive issue of Ram temple construction in Ayodhya, the donations had been classified into denominations of Rs 10, Rs 100 and Rs 1,000 — not a blanket Rs 1,000 as the BJP had purportedly done for the Joynagar event.

Told the coupons had been found with several farmers, Bapuli said: “We need to find out how the poor villagers got hold of the coupons. The coupons were intended to collect donations from traders and salaried sympathisers of the party.”

CPM leader Ganguly, a minister in the erstwhile Buddhadeb Bhattacharjee cabinet, said: “This immensely unfair practice of the BJP is widely known. But the people here have rejected their offer of money.”

Hazrat Laskar, a CPM supporter from the area, said: “A BJP leader distributed these coupons in the last week of March. He told many villagers like me to attend Modi’s meeting. Some people found the offer attractive enough to attend the meeting. However, there are many like me who received the coupons but eventually did not attend.”

Laskar added: “The BJP leader also requested us to vote for the party, and said that the assured gift of Rs 1,000 in cash would be paid only after voting was over. I decided not to compromise my political ethics.”

Trinamul supporter Mostakim Khan echoed Laskar, his political opponent, but accused the CPM of having helped the BJP.

“There is nothing unusual any more in the BJP distributing cash to woo voters, more so since that party has no support base in this district,” said Khan, referring to South 24-Parganas.

“On countless occasions, Mamata Banerjee has spoken about this in public and alerted us. The BJP leaders in the area distributed the coupons even among our supporters, asking them to attend the meeting and to vote for them. But we are certain that most of them did not attend the meeting and hopefully have not voted for the party, either,” he added.

Khan could not resist blaming the CPM. “I think the local CPM and ISF supporters helped the BJP to circulate the coupons since the BJP leaders hardly have any access to the area. So without their support, the BJP could not have distributed these coupons.”