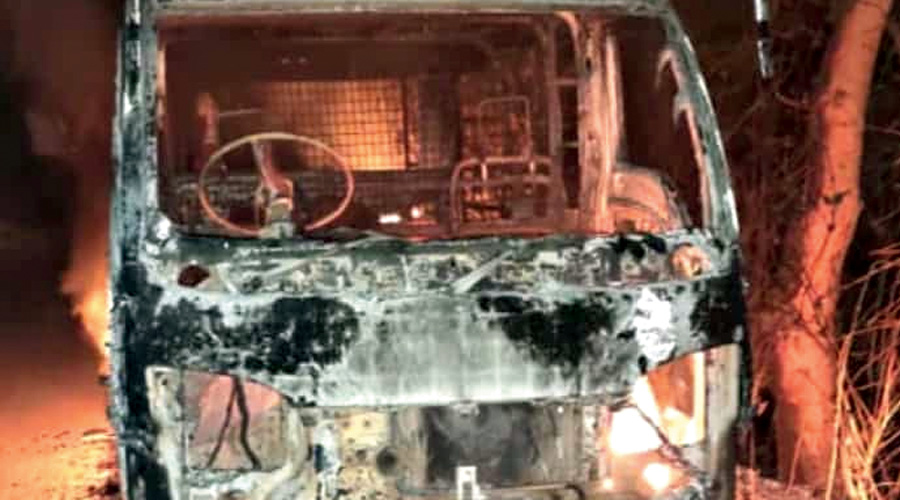 Two unknown men set on fire a car on duty for elections after they asked its driver to get off in Purulia’s Bandwan on Friday night.

Police have started a probe to find out if Maoists were involved in the incident. The police said such an incident of arson had not happened in the region after 2011.

Bandwan will go the polls in the first phase of the voting on Saturday.

Police sources said Bandwan was a known Maoists bastion in the Left Front era. They said the incident, which was carried out by unknown goons, who had their faces covered with clothes, could not be taken lightly as the style of attack matched that of Left-wing extremists. “We have already started a probe. We are interrogating the driver who claimed he was stopped and forced to get down before they set the car on fire,” said Purulia district police chief Biswajit Mahato.

Asked whether the police suspected the Maoist role behind the incident, he said: “I can’t rule out the doubt right now.”The police sources said a car assigned to deliver food for polling personnel at various booths had been returning to a nearby village in Supurdih when the unknown men stopped the vehicle.

“The driver told us that he was first asked to get off the car and later they took fuel from the tank and set the vehicle ablaze. He could not recognise the duo as they used black clothes to hide their faces,” said a police officer.

Bandwan was once a Maoist-dominated area and several attacks on police had taken place since early 2000 when the activities of Left wing extremists were very high in the region. In 2003, the then officer in charge of Bandwan was killed in a landline explosion by Maoists.