The party led its members to tweet a picture and a video clip of purported mob violence in the constituency, quickly exposed as fraudulent and hurriedly deleted 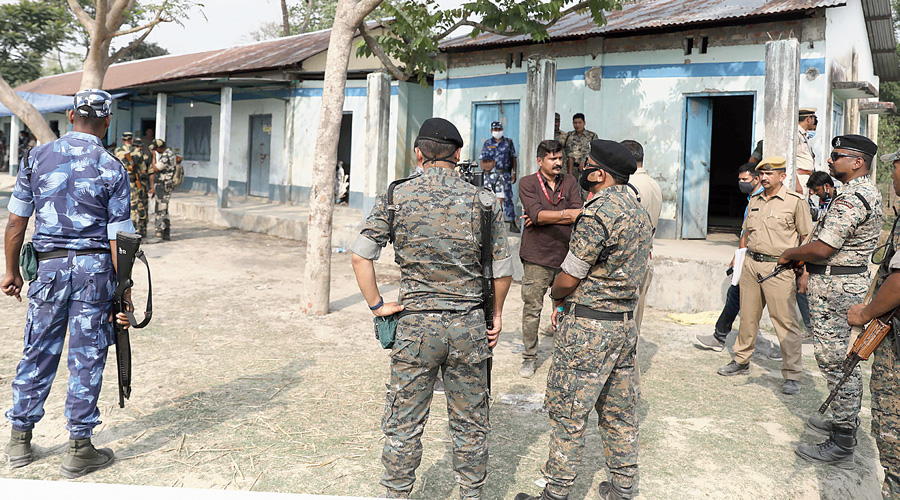 The saffron ecosystem’s desperation to defend Saturday’s killings in Sitalkuchi has led its members to tweet a picture and a video clip of purported mob violence in the constituency, which were quickly exposed as fraudulent and hurriedly deleted in the face of a social media backlash.

The photo was from Jharkhand and the video a two-year-old one from Manipur, Trinamul has said and independent fact-checkers confirmed.

On Sunday, several BJP leaders and party supporters had shared a photo of a CISF officer with severe face injuries and claimed his wounds were the handiwork of voters in Jorpatki.

This was an attempt to buttress the official claim that CISF jawans had fired — and killed four voters — after being attacked by a violent mob in Jorpatki, part of Sitalkuchi constituency in Cooch Behar district.

The photo was taken down after Trinamul held a news conference on Monday and said a check had revealed that the officer in the picture was the victim of a langur attack in Baghmara, Jharkhand, on April 9.

Trinamul turncoats in the BJP such as Suvendu Adhikari, Rajib Banerjee, Saumitra Khan and Arjun Singh had all shared the picture, claiming Trinamul “goons” in Sitalkuchi had injured the officer. So had the BJP youth wing’s national vice-president, Santosh Ranjan Rai.

None of the posts mentioned the death of the four civilians, or the allegation that the CISF had shot at least some of the victims above the waist.

On Monday, a Facebook page titled “BJP Kamarhati”, which generally campaigns for the BJP’s Kamarhati candidate Raju Banerjee, shared a video of a mob attack on a polling booth, claiming this had led to the Sitalkuchi firing.

Trinamul again issued a statement saying the video showed an incident at a booth in the Imphal East constituency of Manipur during the 2019 general election. Polling had been disrupted at the booth after some voters turned violent over alleged misconduct by an election official.

AltNews and the India Today fact-checking team corroborated the Trinamul charge. The video was quickly pulled down.

The BJP tried brazening it out. “Which images are being shared is not important; what is important is that the ECI (Election Commission of India) has said the jawans were attacked. It’s a question of their security,” state BJP spokesperson Samik Bhattacharya said.

Rajib Banerjee said: “I had no idea that this had happened. I asked my social media handler to take it down immediately when it was brought to my notice. I suspect someone had hacked my account with some ill intention and did this. I asked Suvendu to take the post down from his wall too.”

Calls to the mobile numbers of Suvendu, Saumitra Khan and Arjun Singh either went unanswered, or evoked the reply from aides that the leaders were busy campaigning.

“This is illustrative of the kind of Goebbelsian lies that the saffron camp’s propaganda machinery likes to work with. There are countless such examples from recent months in Bengal alone,” said Sukhendu Sekhar Roy, Trinamul national spokesperson and chief whip in the Rajya Sabha.

“Every fact check exposes them but they keep coming back with more lies or twisted half-truths on social and mainstream media.”

Trinamul seniors said that though BJP leaders have been threatening Sitalkuchi-like incidents across Bengal, they are increasingly unsure of how the incident would influence the vote in the remaining 159 of the state’s 294 seats.

“Therefore, they have been trying to substantiate the claims of the Election Commission and the central forces that the jawans had fired in self-defence,” a Trinamul vice-president said.

While the authorities claim the personnel had fired to protect themselves, their weapons and the electronic voting machines from a violent mob, villagers say the forces fired without justification on a mob protesting a jawan’s unprovoked thrashing of a boy at a nearby market.

Questions have been raised over the absence of cell phone and CTV footage of the incident, with the villagers saying the forces had removed the security cameras and snatched mobiles from the dead and the living. The police have accused the villagers of stealing the CCTVs.

On Tuesday, the BJP blamed Mamata and the senior IPS officer in charge of her security for the absence of cell phone images.

The police, however, are functioning under the Election Commission.