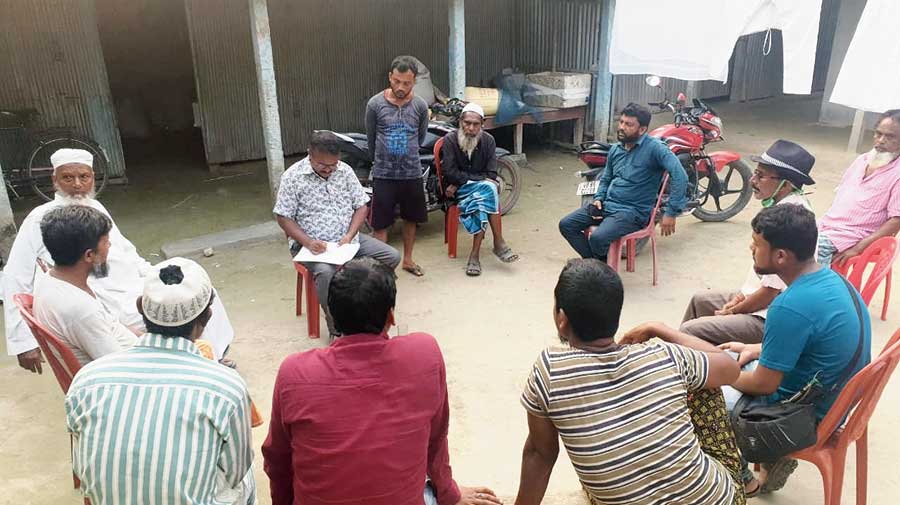 A Trinamul leader on Tuesday jots down the names of the representatives of the four bereaved families who will meet Mamata Banerjee.
Main Uddin Chisti
Main Uddin Chisti   |   Cooch Behar   |   Published 14.04.21, 01:07 AM

The four youths of Jorpatki village, who died in a firing by CISF jawans posted at Amtali MSK (booth number 5/126), had bullet wounds in their upper torso, a source in district police said on Tuesday quoting post-mortem reports.

“They were hit by bullets in their neck and chest. I don’t know the other details like how many bullets had hit each one of them,” said the source.

After the incident on Saturday, Trinamul supremo Mamata Banerjee had claimed that the central forces had fired at the youths to kill and not to injure them.

On Sunday morning, as she spoke with the families through video calling, the chief minister had shown some photographs claiming them to be those of the deceased and said the central forces had fired to kill them.

“I have seen the gory photos of their bodies and it’s clear from the pictures that the bullets hit their chest and neck.. It is evident that the CISF men did not fire at their legs, as is the usual practice, but had fired to kill them,” she had said.

On Monday, Abdul Gani, a local panchayat member who also filed a complaint at Mathabhanga police station over the incident, had also made a similar claim. He had mentioned how a CISF man had shot Samiul Haque, one of the deceased, as he tried to dissuade the former from beating Sahidul, his brother.

The delay on the part of the police to hand over the post mortem reports left the families and their neighbours disgruntled. Once again, they asked the Election Commission and the administration what steps had been taken against the CISF men after the incident that claimed four lives.

The villagers mentioned that unlike another incident — the death of Ananda Burman, another youth who died at another booth (5/285), also under Sitalkuchi Assembly seat, as he was hit by bullet during a clash among Trinamul and BJP supporters — none of the CISF men who opened fire in their place have been taken into custody.

“In the other case, the police acted proactively and have arrested the principal accused, who had purportedly fired at the youth. But in our case, we have not heard about arrest or detention of any of the CISF men or seizure of their firearms. Such differences have made us ponder as to whether both the incidents are being treated with equal importance and in a neutral manner,” said Ershad Hossain, a resident of Jorpatki.

So far, officers of Mathabhanga police station have been to the village and have spoken with some of the injured persons. “We don’t have any information that they have spoken with the families…. We really don’t know where the investigation is heading to,” said Haider Ali Mian, the brother of Hamidul, who has also lost his life in the firing.