‘The challenge now is to save Bengal’s liberal legacy’ 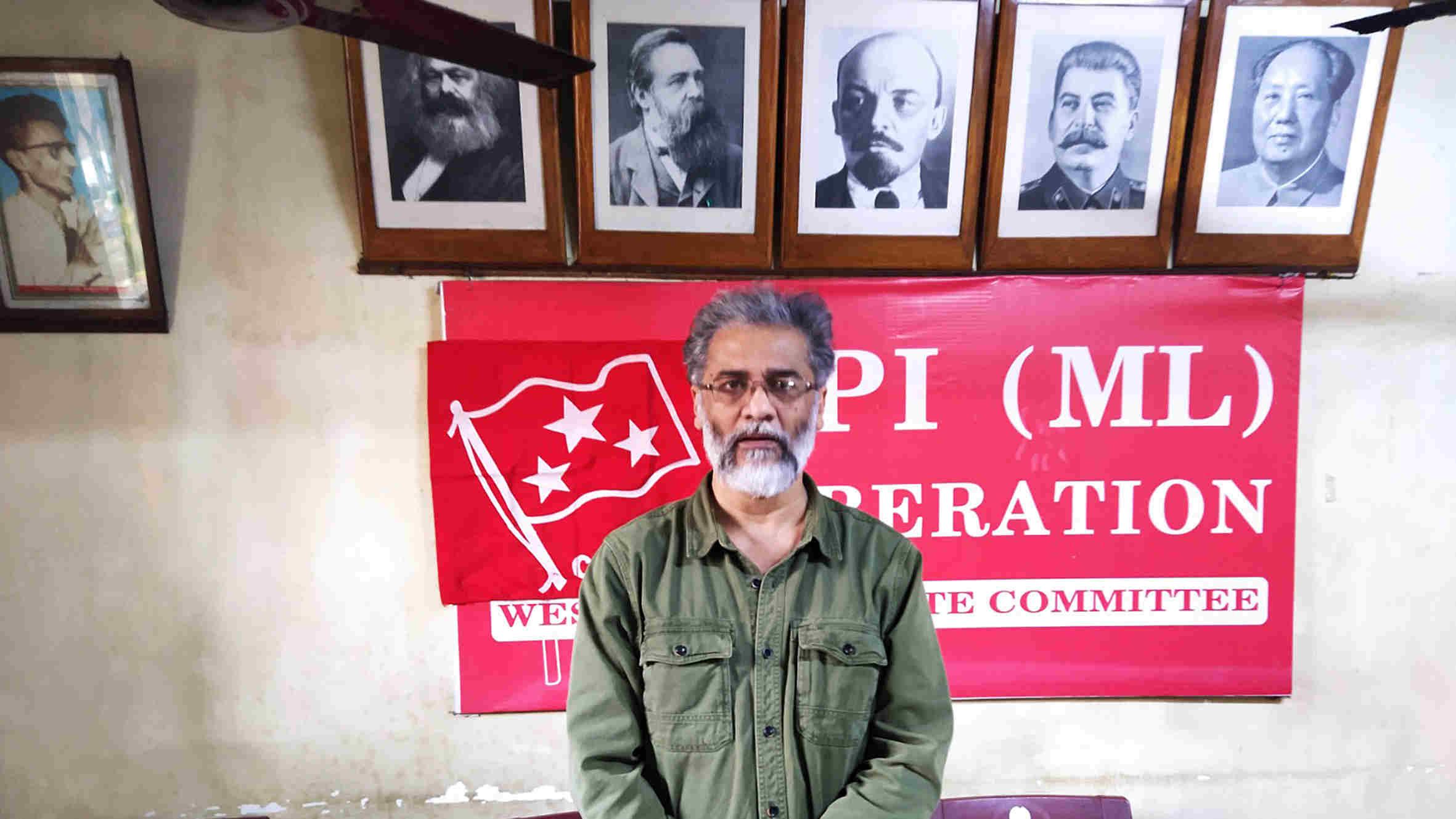 On a lazy February afternoon, I catch up with Dipankar Bhattacharya at the offices of the CPI-ML (Liberation) in central Calcutta. He is busy discussing plans for upcoming public meetings and conventions across West Bengal with a comrade of his. This includes a meeting called Ekusher Daak, Manusher Dabi — which falls today, February 21; the day has been earmarked by Unesco as International Mother Language Day. On this day this year, large numbers across Bengal are expected to meet and firm up a charter that pledges to “save Bengal from the BJP’s fascist expedition”.

A section of Bengal’s intelligentsia — writers, actors, musicians, playwrights, artists, educators, environmentalists, human rights activists — has already met to formulate the charter. The charter demands withdrawal of the farm bills, labour code bills, the Citizenship Amendment Act, privatisation of government properties and so on. Bhattacharya seems to think his party has been able to sensitise a large section of “intellectuals” about “the aggressive designs of the BJP to capture Bengal by hook or by crook”.

Bhattacharya is lanky, nearly six-foot tall, sports a salt-and-pepper beard that makes him look more like a philosopher than a politician. We talk while sipping laal cha, tea without milk and sugar, the customary drink in almost all Left party offices; we are constantly interrupted by the sirens of ambulances headed for the Nil Ratan Sircar Medical College and Hospital on the other side of the road.

When I ask Bhattacharya to sum up the agenda of the CPI-ML (Liberation) for the upcoming Assembly polls in a slogan, he offers two — “Save Bengal’s liberal legacy” and “More power to people”.

While explaining the first, he emphasises why the BJP’s “fascist ideology” can ruin the liberal and inclusive legacy Bengal nurtured through the freedom struggle and subsequent Left movements. He says, “The BJP is just the antithesis of a progressive, pro-change and rational temper — the essential aspects of a Bengali identity.” To explain the second slogan, he draws attention to how the survival of the common man has turned into a challenge ever since the BJP came to power. He cites job losses, the agrarian crisis, price rise and loss of labour rights.

Three months ago, Bhattacharya had said that in the upcoming Bengal elections, the Left Front and the Congress should identify the BJP as the “No. 1 threat to democracy”. But his proposal was somewhat derided by both the parties. Says Bhattacharya, “They have been bracketing the Trinamul (TMC) and the BJP together, but considering the situation in Bengal, an enemy like the BJP cannot be defeated if they fight on two fronts.”

He admits that the TMC’s track record is not good, and agrees it is true that in some ways it has tried to imitate the BJP. But according to him, there is no underestimating the current situation. Bhattacharya cites his own party’s pragmatic decision to join the Grand Alliance with the Congress and the Rashtriya Janata Dal (RJD) during the 2020 Assembly elections in Bihar, despite the fact that the two parties have been sworn rivals of the CPI-ML (Liberation) in the past.

The RJD, led by former chief minister Lalu Prasad, had allegedly colluded with upper caste militia Ranvir Sena to massacre several Dalit villagers aligned with the CPI-ML (Liberation) in the 1990s. Many party leaders and activists, including firebrand student leader Chandrasekhar, were murdered at the behest of gangster-turned-RJD-leader Mohammad Shahabuddin. Says Bhattacharya, “We were the worst sufferers of crime and corruption during the RJD rule, and yet at this moment we consider the BJP’s majoritarian and communal politics a bigger threat to our democracy.”

Bhattacharya talks about the Congress, another partner in the Grand Alliance in Bihar. He is still peeved with the Congress’s poor performance in the Bihar Assembly polls last November. “They insisted on fighting 70 seats, but they won only 19. Had they won at least 30, or let us — the Left parties — contest from more seats, the alliance would have formed the government. They didn’t take the elections seriously and neither do they have the organisational strength. They were lackadaisical, loath to believe it is possible to form such a formidable alliance against the NDA,” he says. According to Bhattacharya, the Congress needs to reinvent itself immediately and introspect on how it has helped the BJP grow.

In the Bihar Assembly polls, the CPI-ML (Liberation) won 12 seats out of 19; the resurgent Left together bagged 16 out of a total 29 seats allotted to them, a strike rate of over 50 per cent. Drawing lessons from the Bihar polls, Bhattacharya believes the Left’s alliance with the Congress for the upcoming Bengal polls is not such a good idea. “The Left here must get their act together and never allow the Congress to position itself in the driver’s seat,” he says.

Bhattacharya is concerned about the alarming decline of the Left’s vote share in Bengal — down to 7 per cent — in the 2019 Lok Sabha elections. When I bring up the widespread belief that a large share of the Left vote had shifted to the BJP during these elections, he says, “I can’t say whether the vote shift happened by design or default, but the fact is shocking in itself. How can a party that secured nearly 50 per cent of vote share a couple of decades ago go down so drastically?”

He is rueful that despite such a loss of public support, the Left Front, especially leaders of the CPM, didn’t attempt any serious course correction. “Some leaders still think they are not fighting the TMC enough, as if fighting the TMC is their only agenda… They are simply not aware that the BJP won’t spare them if they come to power,” says Bhattacharya and even cites what the BJP did to the Left and its supporters in Tripura.

And where does the Trinamul boss and current chief minister of Bengal, Mamata Banerjee, figure in his critique of the mess that is Bengal politics? Bhattacharya harks back to the time when the Left was voted out of power in Bengal and there was tremendous disenchantment and anger against them, how Banerjee benefited from it, came to power, and a large section of Left leaning intelligentsia started regarding her as the “new Left”. But does he deny that after assuming power, Banerjee came down heavily on the Left; that CPM party offices were attacked? No, he doesn’t. “There was clearly a rightward shift and the BJP started to gain ground. They brought out the communal divisions that were beneath the surface,” says Bhattacharya.

What does he have to say about the TMC’s alleged Muslim appeasement? His response: “I won’t call this appeasement. Mamata Banerjee’s concern for Muslims was never real, it was more of a symbolic gesture. It is just political opportunism; she never pursued any anti-Hindu agenda.” He also seems to believe that post 2019, Banerjee went for some course correction to fight corruption in her party, tighten up on development agenda and deliver social schemes.

Bhattacharya has travelled extensively across Bengal the last three months; especially pockets his party considers its strongholds. And what is his reading? “There has been some change of attitude of voters since the second term of the Modi government began,” he replies. He talks about disillusionment setting in over a range of issues.

And from discussing this and that, we are back to talking about Bengal’s electorate which has never experienced BJP rule in the state. Bhattacharya says, “We’ve been successful in creating a certain degree of awareness… Based on the lessons learnt from Bihar and Jharkhand, we have been telling people to fight unitedly against the divisive politics and social engineering of the BJP and the Sangh Parivar. We have been initiating conversations about how elections can be turned into a people’s agenda and an antidote to communalism and social oppression.”

Recently, the CPI-ML (Liberation) announced that it would contest 12 seats independently in the upcoming Bengal elections. Apart from these, the party is ready to support the TMC and Left Front candidates and the Congress candidates too, if required. Bhattacharya says, “We are not electorally strong in Bengal but we have our own pockets of struggle, especially in the tea gardens and the Adivasi areas in the western region.”

1960: Bhattacharya is born in Guwahati, the son of a  railway employee
Does schooling from Ramakrishna Mission Vidyalaya, Narendrapur
1979: Comes first in the West Bengal higher secondary exams
Joins the BStat programme at the Indian Statistical Institute, Calcutta, and becomes active in CPI-ML (Liberation) politics. Completes MStat in due course
Becomes general secretary of the Indian People’s Front in the 1980s and thereafter of the party’s trade union wing, the All India Central Council of Trade Unions
1987: Is elected member of the central committee and political bureau of CPI-ML (Liberation)
1998: Is unanimously elected party general secretary after the sudden death of Vinod Mishra
2020: Leads the CPI-ML (Liberation) to an unprecedented seat haul in the Bihar Assembly polls