We were in the dark about size: Contractor 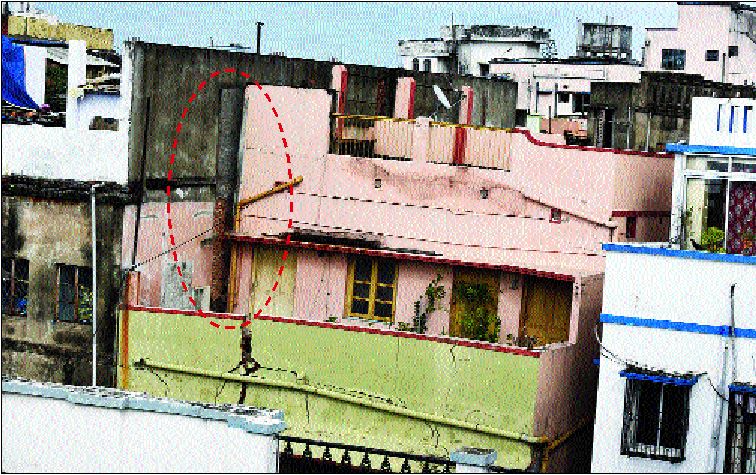 A building in Bowbazar that has tilted because of water seepage into the East-West Metro Metro tunnel underneath. The portion marked in red shows the displacement.
Pictures by Pradip Sanyal
Sanjay Mandal   |   Calcutta   |   Published 04.09.19, 09:56 PM

Engineers involved in digging the East-West Metro tunnel in Bowbazar had been aware of the presence of a giant water-bearing strata, which has been estimated to be 19m deep and about 600m long, before the tunnel-boring machine ran through it, KMRC sources said.

The engineers tried twice to inject concrete from above the ground to fortify the stretch through which the boring machine would pass but failed. They went ahead with the digging anyway, the sources said.

An ITD-ITD CEM official denied there were two failed attempts at injecting concrete from above. “We were grouting (applying a mixture of water, cement and sand) from inside the tunnel when the machine was moving. But that was not enough,” he said.

The tunnel-boring machine was passing through the aquifer when water started entering the tunnel, causing severe subsidence of soil and damage to more than 50 buildings. Till 9pm on Wednesday, as many as 465 people had to be evacuated from homes.

Officials said the mishap would delay the East-West Metro project, which has missed multiple deadlines, by an “indefinite period”.

The 16.5km East-West corridor will connect Sector V with Howrah Maidan and run under the Hooghly. The first phase, to stretch between Sector V and the Salt Lake stadium, is likely to be operational around Durga Puja.

A building in Bowbazar, a portion of which collapsed on Tuesday
Pictures by Pradip Sanyal

Sources in the Kolkata Metro Rail Corporation (KMRC), the implementing agency of the project, said the company awarded the contract to build the tunnels between Esplanade and Sealdah, ITD-ITD CEM, were aware of the mammoth aquifer.

“It starts 5 metres under the surface and extends till 24 metres,” an engineer involved in the project said. “It’s extremely risky to take the tunnel-boring machine through this huge water pocket without proper precautions. After travelling 200 metres through the aquifer, the water pressure rose so much that the machine gave in.”

Those managing the operations were aware of the risk, the sources said. So, they had twice planned to inject grout from above, hoping that it would fortify the stretch and prevent leakage of water into the tunnel. Both attempts failed.

The ITD-ITD CEM official this newspaper spoke to said: “We knew about the existence of the water-bearing strata but there was no way to know about its size.”

A senior KMRC official claimed it was an accident and there was no way they could have pre-empted it.

The area under which the tunnel-boring machine was moving was dotted with old buildings. The roads in the locality are narrow.

The worst-hit buildings, which are directly above the tunnel-boring machine, are along Durga Pituri Lane and Syakrapara Lane, off BB Ganguly Street.

“Both roads are very narrow. The huge vehicles that carry the grouting equipment could not enter the lanes. So, the plan to inject grout from above had to be abandoned and the company went ahead with the job,” a source said. 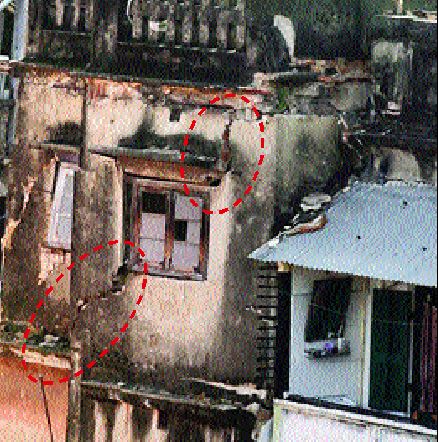 Cracks on a building in Bowbazar
Pictures by Pradip Sanyal

Engineers with decades of experience in burrowing tunnels said work should have been stopped at that point.

“The KMRC is calling international experts for crisis management.... ITD-ITD CEM and the KMRC should have visualised the risk of taking the machine forward and stopped work for a while,” a tunnel veteran pointed out.

“The international experts should have been called then and asked how to avert the disaster.”

Hundreds of residents were evacuated within a few hours on Sunday morning, after water from the aquifer started flooding the tunnel and buildings started developing cracks. Most residents had to leave in a hurry, leaving essential items as well as valuables behind.

“The evacuation, had it started earlier, could have been done in a planned manner. The inconvenience would have been minimised,” said a source.

“Had those measures been taken before, the tunnel-boring machine could have been saved. Now, it’s a challenge to take out the machine.”

A KMRC official said once the machine was taken out and examined, it would be known what caused the accident.