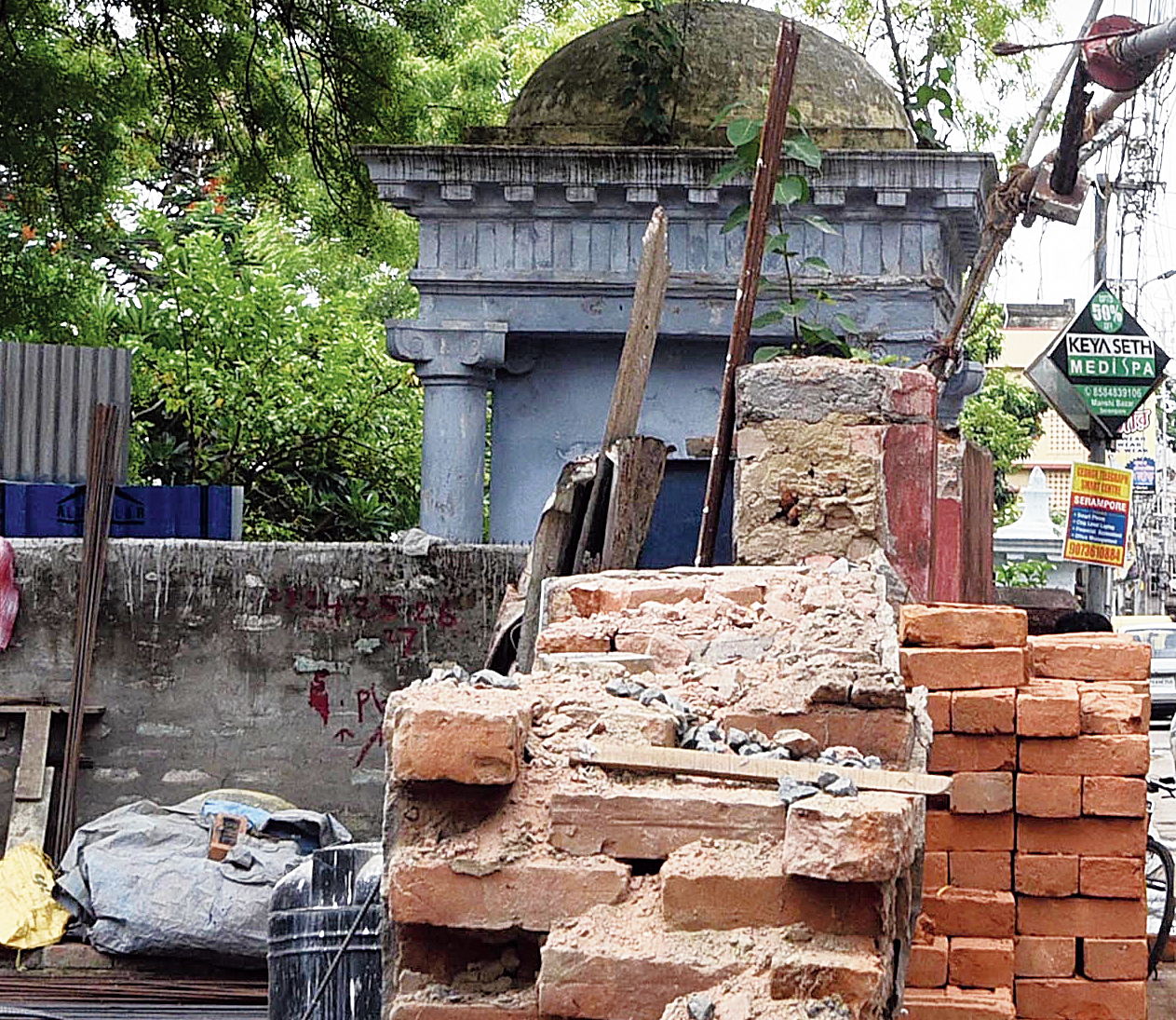 A photograph that was circulated on social media over the week suggests that the boundary wall of the cemetery (in centre) of William Carey was also demolished when the wall of the adjoining property was brought down as part of a construction project.
Picture by Pradip Sanyal
Subhankar Chowdhury   |   Serampore(Hooghly)   |   Published 08.06.19, 01:26 AM

The photograph that was circulated on social media.

The perimeter wall of the cemetery where 18th century British missionary and educator William Carey was interred in Serampore is intact.

A Facebook post and a campaign on social media had alleged over the past week that a part of the cemetery’s wall had been smashed by a real estate developer to dump construction materials on the graveyard for a building coming up on an adjacent plot.

On Friday afternoon, about 30km north from the heart of Calcutta, Metro found the wall intact although in distress from years of neglect.

The cemetery’s perimeter wall is separated from the wall of the construction site by a passage about 5ft wide.

That passage is now almost entirely blocked with corrugated sheets and iron pipes stacked by a local hardware store.

The owner of the hardware store Dibyendu Dutta lives in the house at the end of the passage between the construction site and the cemetery. Store owner Dibyendu said: “I will remove the items.”

The local councillor, Rajib Dutta, said he had asked Dibyendu to clear the space at the earliest.

Dina Mahato, who has been serving as a caretaker of the cemetery for close to two decades, denied any breach in the perimeter wall.

“The wall remains the way it has been for many years. I have not seen any construction materials dumped on the cemetery,” Mahato said.

He is aware of the Facebook post. Many people have been coming and enquiring about it since it gained in circulation. Even police had come. “They asked me whether our wall has been broken. I clarified everything,” Mahato told Metro.

A closer look shows that the cemetery and the construction site have two different boundary walls, divided by a narrow corridor with a door. Questions about the upkeep of the corridor can be raised but the wall of the cemetery was intact as on Friday afternoon.

The picture above gives a clear view of the cemetery and its boundary wall with the wooden door to the corridor, all of which look intact.

The view from inside the premises where the cemetery is located. The boundary wall on the right is the one running parallel to the wall of the construction site, divided by the corridor. Some people suggested that the whitewashed portion of the wall was built overnight after the picture suggesting damage was circulated on social media. The caretaker of the cemetery said there was no breach in the boundary wall, which had creepers sticking out and a moss-covered top.
Pictures by Pradip Sanyal

The graveyard is located on Brojo Dutta Lane, tucked off the foot of the Serampore flyover that arches over the rail line and lands on another part of GT Road.

The allegations about the graveyard swirled on cyberspace after Chandernagore resident Neline Mondal had posted on Facebook: “Back boundary wall of William Carey’s graveyard partially broken DOWN for building high-rises.”

She told Metro on Friday that she had not personally seen the allegedly damaged portion earlier but had depended on pictures sent by local sources.

After having visited the site later in the day, Mondal said: “The danger to the perimeter wall came from the corrugated sheets and iron pipes that are tilted towards the graveyard. The wall is sure to collapse if this goes on.”

The wall may be intact but there is no doubt that the cemetery is a victim of Bengal’s familiar administrative apathy towards history.

The compound is full of shrubs, creepers and plants have eaten into its walls and except for a coat of white lime on the cemetery and portions of the boundary wall there is nothing to suggest anyone even cared about the place until the controversy erupted.

Caretaker Mahato said the overgrowth was cleared once a year, ahead of Carey’s birth anniversary on August 17.

There is no signage to help a commoner know about the existence of the place where Carey was interred along with Joshua Marshman and Willam Ward — the formidable trio credited with sowing seeds of modern education in Bengal. It is spread over a parcel of land measuring a little more than two acres.

Carey, who was a botanist by passion, and maintained a five-acre garden in Serampore with aviaries, died on June 9, 1834.

His entire family is interred at the graveyard, said Antara Mukherjee, the lead honorary researcher of Hughli Rivers of Cultures project.

The body is funded by the Arts and Humanities Research Council, UK, and the Indian Council of Historical Research to work on restoration of heritage structures in a corridor of five towns upriver that have traces of the presence of Danish, Dutch, Portuguese, British and French trade and martial control.

Serampore College — was founded by Carey, along with fellow missionaries Marshman and Ward on July 15, 1818 on the banks of river Hooghly — is about 2km away from the graveyard.

Asked why the local Serampore municipality had not put up a board announcing the presence of Carey’s grave there, councillor Dutta said: “It is the college’s property and they have not shown any keenness.”

The vice-principal of the college, Bidyut Banerjee, denied the charge. “No one ever contacted us on this,” he said.

Lack of care for Carey is, however, not restricted to the graveyard only.

On January 3 this year, Metro had reported how the Aldeen House building along the Hooghly, where the seeds of modern education in Bengal were sown under the tutelage of Carey and two other British missionaries had slipped into decay.

Calcutta mayor Firhad Hakim, who is also urban development minister, had then pledged that the decrepit building would be restored if the college made a formal appeal. Nothing has moved since then.