Vote for Babul Supriyo, vote for Didi: Abhishek to electorates 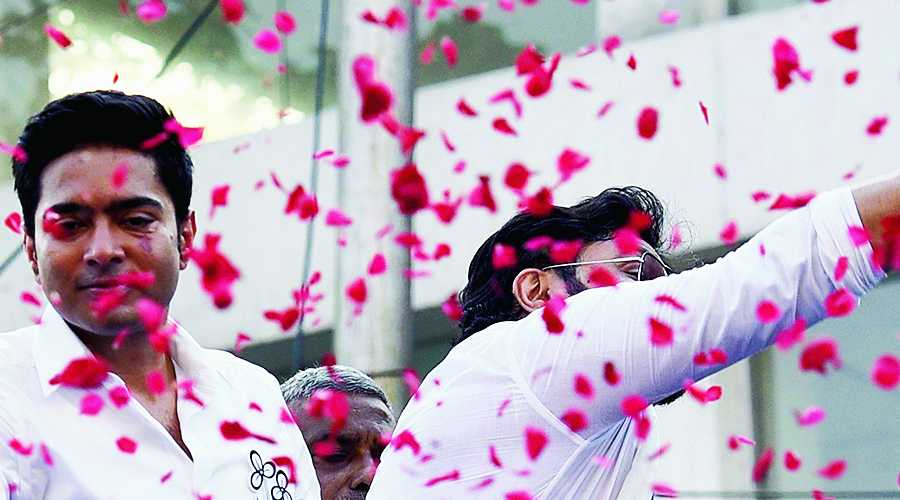 Trinamul Congress general secretary Abhishek Banerjee on Thursday sought votes from the electorate of Ballygunge in the name of Mamata Banerjee following an apparent realisation in the ruling party that a section of voters in the constituency have reservations about its nominee Babul Supriyo who deserted the BJP.

“Babul Supriyo is not the candidate. The name of the candidate is Mamata Banerjee. If you vote for the twin flowers, you’ll be directly voting Mamata Banerjee,” Abhishek said at a public meeting in Park Circus during the campaign for the April 12 bypoll to Ballygunge.

The meeting was held after a road show from Ballygunge Phari to the Park Circus seven-point crossing, which Abhishek led in support of Supriyo.

In his speech, the Diamond Harbour MP obliquely referred to questions raised over the candidature of Supriyo, who had formerly vowed unabashed support to the contentious Citizenship Amendment Act during his days in the BJP. Supriyo was also accused of making inflammatory speeches during communal riots in Asansol in 2018.

“After our candidate was announced, a lot has been said by a lot of people, that to vote for Babul Supriyo would mean vote for the BJP. I want to tell them that Babul Supriyo has quit the BJP’s politics of Jai Shri Ram and trusted the politics of Jai Bangla and Jai Hind to join the Trinamul Congress,” Abhishek said.

While wrapping up his speech, Abhishek even went to the extent of taking up the responsibility of serving the people of Ballygunge himself if they voted for Supriyo.

“Whoever is in doubt, let me tell you I’m a bit different from the rest. I do what I say…. You go to vote for Trinamul Congress. Cast your vote for Babul Supriyo by pressing the first button and make him win by a huge margin…. I take up the responsibility of Ballygunge’s development for the next five years on my own shoulders,” Banerjee said.

Sources in Trinamul said Abhishek was trying to win over Muslims, who comprise more than 30 per cent of total voters, through the speech.

They said the undercurrent of discontent with Supriyo was not unknown to the top ranks in the party.

‘‘Although we are sure of our victory, the fact that Abhsihek had to send out a message proves that the leadership is worried about the victory margin,’’ said a Trinamul insider.

In 2021, Subrata Mukherjee of Trinamul had defeated his nearest contender from the BJP by a margin of 75,359 votes. The bypoll was necessitated by Mukherjee’s demise in November.

Abhishek’s move on Thursday was in line with the Trinamul tactics of falling back on its biggest asset, Mamata, in times of crisis, said a political observer.

‘‘Ahead of the 2016 assembly polls, when the party was stung by the Narada sting operations, Mamata herself was seen seeking votes in her name in all constituencies. She had done the same ahead of the 2021 polls,’’ said the observer.

On Thursday, Abhishek lashed out at the BJP for being proactive in declaring a film tax-free, but doing nothing about the abnormal rise in the prices of fuel and daily essentials. Several BJP-ruled states have recently declared the screening of the film The Kashmir Files tax-free.

Banerjee said the move was meant to fuel the BJP’s propaganda.

He drew parallels between the leader of Congress party in the Lok Sabha, Adhir Ranjan Chowdhury, and the Opposition leader in the Bengal assembly, Suvendu Adhikari. He said both of them — along with the CPM — had been targeting and attacking Mamata.

According to him, the Congress has been sold out to the BJP and only Trinamul can stop the saffron camp.

Speaking of the multiple Enforcement Directorate notices and summons to him and members of his family, the MP said in spite of all the coercion, the BJP couldn’t make him bow down.

An anti-CAA forum has urged the people of Ballygunge not to vote for Supriyo and pledged support to CPM candidate Saira Shah Halim.