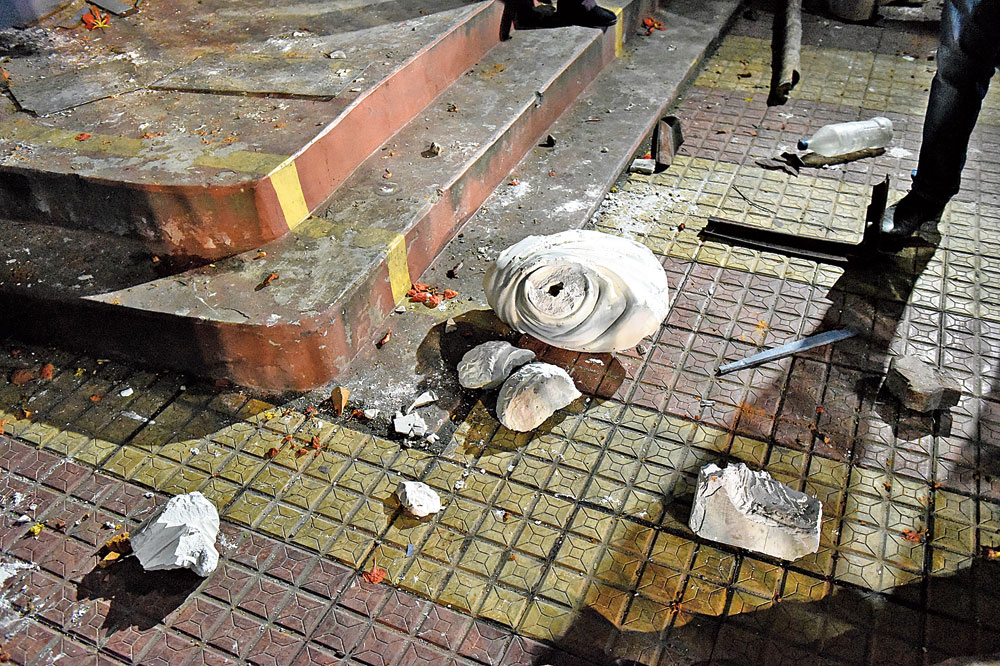 The bust of Vidyasagar, which was kept in a glass case, lies smashed on the premises of Vidyasagar College on Bidhan Sarani in north Calcutta on Tuesday evening
Picture by Sanat Kumar Sinha
Subhankar Chowdhury And Snehamoy Chakraborty   |   Calcutta   |   Published 14.05.19, 10:12 PM 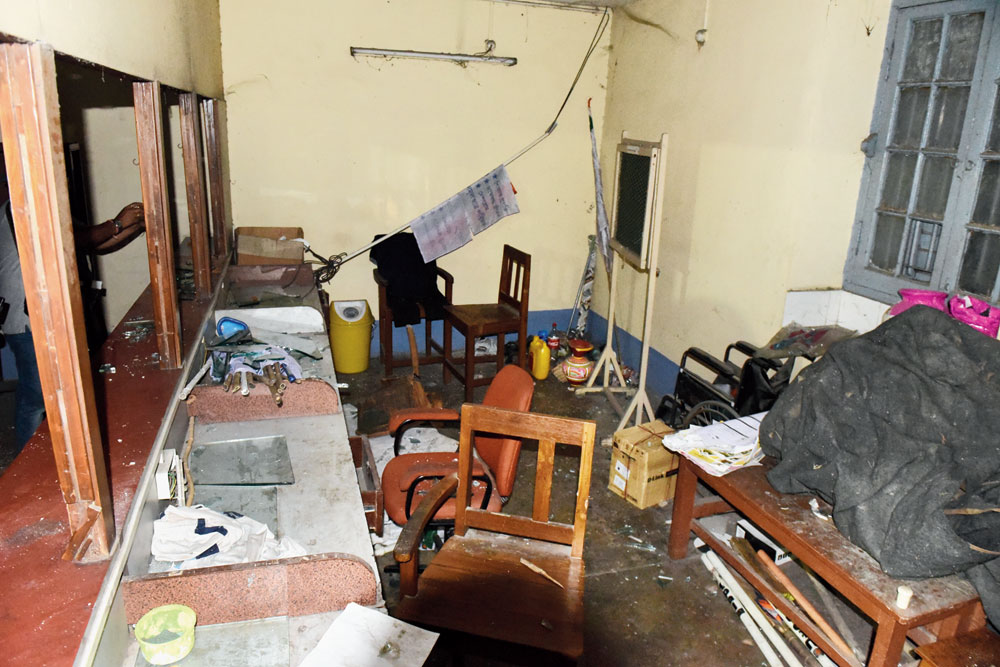 Another portion of the smashed college office.
Picture by Sanat Kumar Sinha
Advertisement

“They have attacked Calcutta University with the help of goons brought from outside. Does Amit Shah have any idea about the stalwarts who have studied in the College? Calcutta University is a place of pride. We are observing the bicentenary celebrations of Vidyasagar’s birth year. they have broken the bust of this icon,” said the chief minister.

Later in night state education minister Partha Chatterjee and Trinamul's nominee from North Calcutta Sudip Bandopadhyay went to the campus and hold meetings with the teachers and the students' leaders inside the Internal quality assessment cell (IQAC) till 10.30 pm.

Manirul Mondal, the general secretary of the college union was also injured by a brickbat said, 'Hundreds of brickbat was thrown and a few of them were covered their face with saffron clothes.'

BJP National secretary and North Calcutta nominee Rahul Sinha said on Tuesday night, “A group of youths from the college attacked our rally without any provocation. The bust was actually kept inside the union room and it was broken by Trinamul and displayed in front of office to frame charges against us. Our workers did not break any bust there. We demand a judicial probe in the incident”.

From the Vidyasagar College the chief minister marched to Calcutta University. She left the university at 10pm.

According to a college teacher, some of the classes in the departments of political science and geography were still being held when the attack took place. “There were three lady teachers. They were cowering in fear inside classrooms when the group attacked the college,” he said.

The college website mentions: “Aided by the zeal, aspiration and sacrifice, of Pandit Iswarchandra Vidyasagar, the College received affiliation of the University for imparting education up to graduation level in 1879 and for B.L. course in 1882. The myth of the European monopoly of Higher Education was shattered and replaced by the academic system devised, by an Oriental Pundit, completely Indic in nature, characteristics and purposes. After demise of the illustrious Founder (born on 26th September, 1820) on 29th July, 1891, the College was renamed Vidyasagar College in the year 1917.

The Bidhan Sarani campus was earlier a hostel. In 2000, the college turned the defunct hostel into the second campus.

Eyewitnesses said that the BJP supporters from the rally took away three motorbikes from the campus and set them afire. Stones were also hurled.

Some of the girl students alleged that the intruders tugged at their dupattas and even tried to touch them.

Swarnali Mitra, a third-year undergraduate student said: “We were standing inside the main gate. The youths started jumping over the iron gate. A youth snatched my scarf. All the youths were shouting BJP slogans and vandalised 20-year-old bust of Vidyasagar.”

Learning about the attack, chief minister Mamata Banejee reached the college at 9.30pm.

She visited the spot where the broken pieces of the bust were kept in the courtyard on the college premises.

“The chief minister collected the broken pieces of the bust in her hands and then headed to the glass case and put them inside the damaged glass case,” said Manisankar Mandal, the state vice-president of the Trinamul Congress Chhatra Parishad.

At 9.45pm the chief minister addressed the press, standing on Bidhan Sarani. 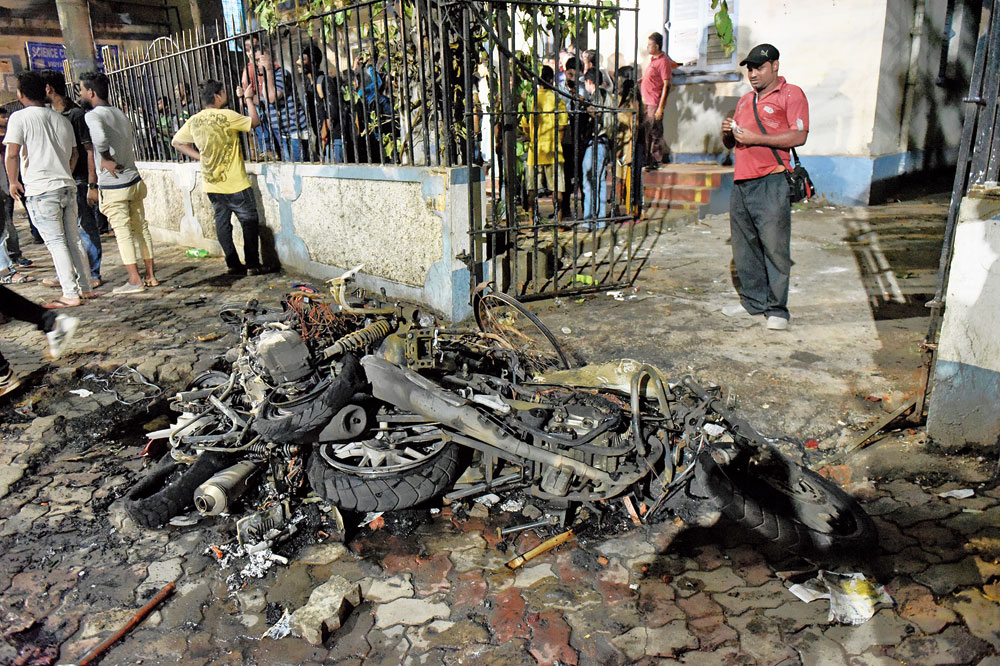 Karmakar, who had come to the college on official work, was shocked to see the incident unfold before his eyes and he, along with his wife professor Minakshi Majumder and two security personnel, took shelter in a corner of the campus to escape the wrath of the mob.

“Security persons told me that a group of people was entering the campus and they tried to take me away. I put my laptop bag on the table near Vidyasagar’s bust and took shelter in a corner of the campus. When I returned, I found my laptop smashed. It was full of documents of both the colleges. Several election duty related papers in my bag were also found missing,” Karmakar said.

“I found a youth with a saffron pagri throwing something on the floor,” he added.

Principal Kundu was at the college’s main campus, off Bidhan Sarani, when the attack took place.

“I could not recognise the office I stepped into. Broken glass lay all over and Vidyasagar, our guiding light, was missing from where we are used to seeing him. We are shocked,” he told Metro later. 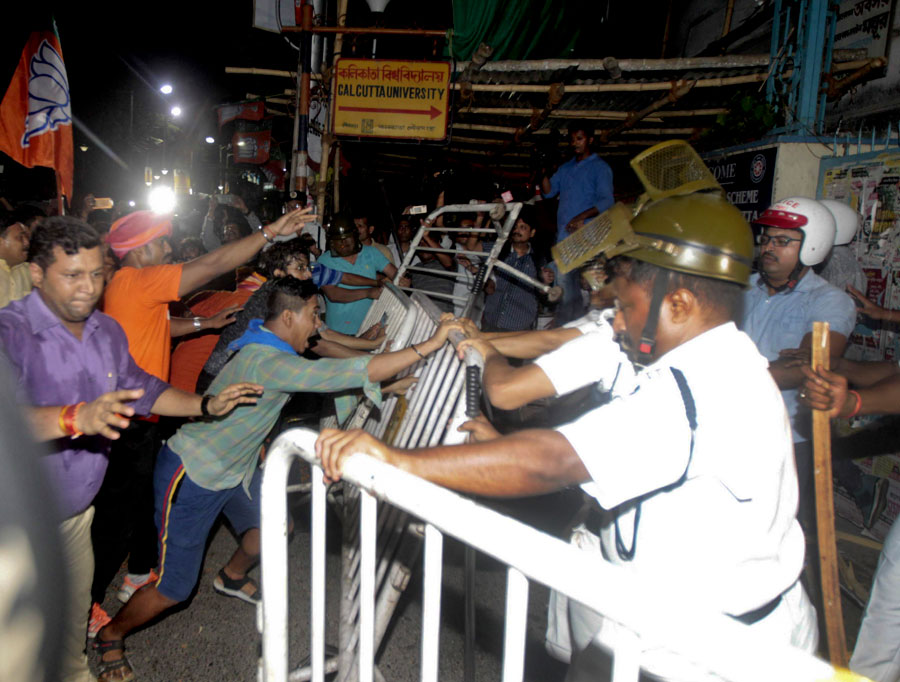 A group of BJP supporters tailing party president Amit Shah’s decorated truck broke into Vidyasagar College and smashed an Ishwarchandra Vidyasagar bust that has been there for at least 20 years.

The bust was inside a glass case in the college’s main office that houses an Internal Quality Assurance Cell (IQAC) and an administrative counter.

Principal Goutam Kundu, who said he was shocked while speaking minutes after the attack between 6.50pm and 7.05pm on Tuesday, described how a group broke open the gate and stormed the office and went for the glass case.

Kunal Dey, a third-year student of the college, said the attackers had covered their faces with “gamchhas” and handkerchiefs so that they could not be identified.

“As they stormed into the ground floor, they broke down the glass case. They also snapped the power cables so that they could carry out the destruction in darkness. The furniture were were broken at will,” said Dey.

The BJP supporters destroyed a laptop of Debasish Karmakar, who had kept his bag in front of a table near the bust.

Karmakar, who teaches zoology at City College, is the Calcutta University’s nominee at Vidyasagar College.