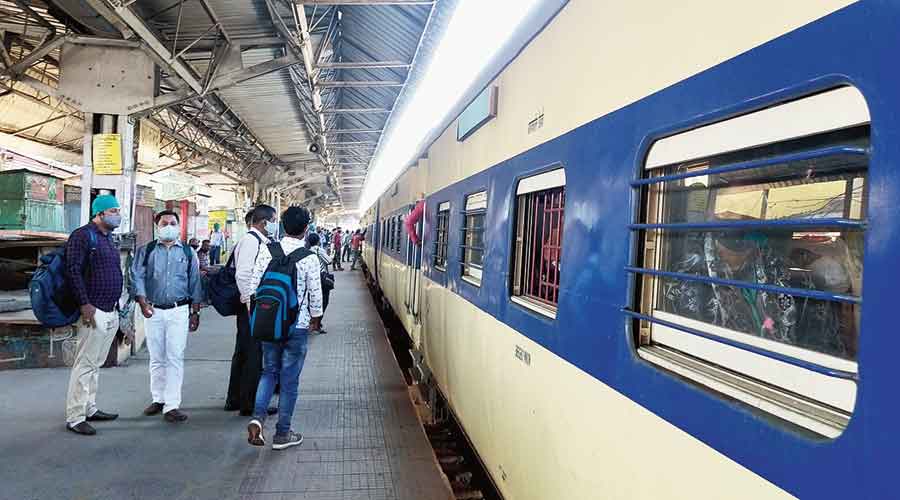 A handful of people at the Kalyani railway station on Wednesday morning
Ranjit Sarkar
Subhasish Chaudhuri   |   Calcutta   |   Published 12.11.20, 02:08 AM

The Telegraph takes look at how the day panned out for railway staff and passengers in the new normal.

At every station, the administration formed a team consisting of health workers, civic volunteers, police and railway officials to ensure that only those wearing masks entered the station and no one evaded thermal scanning. At Naihati in North 24-Parganas, police refused entry to two passengers after their body temperature was found above normal. The police in Nadia’s Chakdah and Barasat in North 24-Parganas did not allow entry to many passengers without masks. “I was allowed into the station after thermal scanning. If this is strictly followed chances of spread of the virus will be less,” said Mousumi Das at Naihati station. At many stations, passengers jostled to board trains. “People ignored safety norms when it came to grabbing a seat,” said a cop at Ranaghat station.

Daily passengers stood in long queues at many stations to buy season and daily tickets. The trouble of passengers increased as the mobile ticketing app of the Indian Railways malfunctioned. Eastern Railway authorities couldn’t say when the app would work. “I had to stand in a long queue to get a ticket to Sealdah,” said Chakdah resident Siben Dey, who works at a mall in Calcutta.

The first day was marked by low passenger turnout at most stations. The usual peak-hour rush was missing. Calcutta High Court and Kalyani resident, Rivu Dutta, said: “I avoided a train trip fearing a heavy rush since it could end up to be a risky affair.”

Though railways had marked out every alternate seat not for use, passengers preferred to overrule the Covid protocol of physical distancing. A commuter said: “Asking passengers to leave a seat in a local train is an absurd idea.” An ER official in Sealdah said: “We don’t have any mechanism to ensure social distancing on board at this moment.” 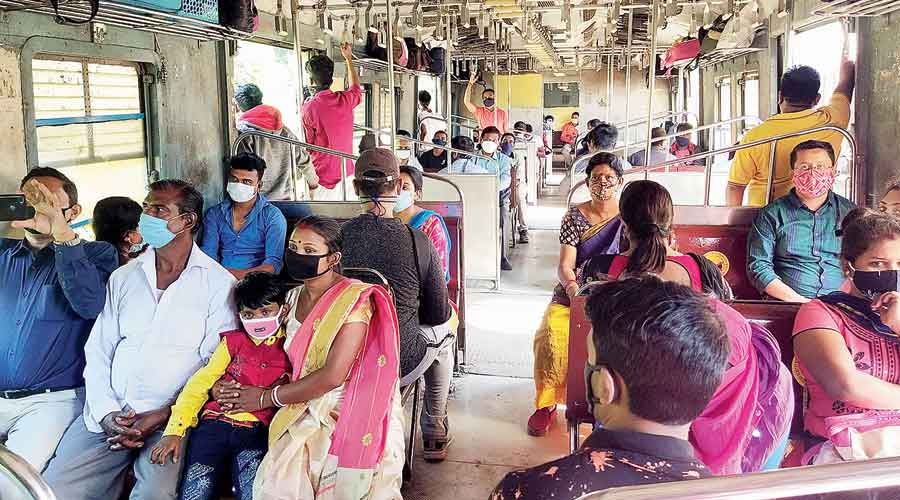 Railway hawkers demonstrated demanding permission to run their kiosks on station premises and sell their wares on board. Hawkers led by the CPM’s trade union wing Citu, staged demonstrations at Barrackpore, Ichhapur, and Barasat stations. The Citu leadership submitted a deputation to the divisional railway manager, Sealdah, demanding licence for hawkers against a fee. Citu leader Gargi Chatterjee said: “When everything is normal, the livelihood the of Bengal’s 60,000 rail hawkers remains jeopardised.”

A recent promise by Sourav Chakraborty, Trinamul MLA of Alipurduar, that land rights would be given to those who dwell on railway land in the town has drawn rebuttal from officials of the Northeast Frontier Railway (NFR). “We have come to know that the MLA of Alipurduar has declared that he will issue special land rights to people on railway land. I don’t know how it is possible without making any correspondence with the railways,” said S. Chanda, the chief PRO of the NFR.