Representatives of the Unicef and the DBITA were present at the event, along with members of the 26 estates of Dooars where the programme would be initiated 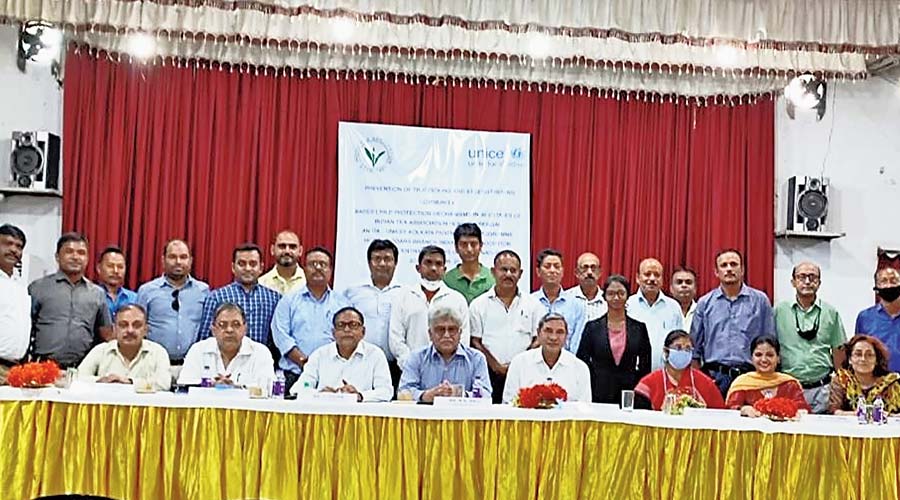 Representatives of DBITA and Unicef at the launch of the anti-trafficking programme in Jalpaiguri on Wednesday
Telegraph picture
Our Correspondent   |   Siliguri   |   Published 28.10.21, 01:48 AM

The Dooars Branch of Indian Tea Association (DBITA) has launched a project in association with the Unicef to prevent human trafficking, especially of women and children, from the Dooars tea belt.

The pilot project to curb trafficking of women and children by involving tea estate dwellers, along with the Calcutta office of the Unicef, was taken after a webinar was hosted by the Indian Tea Association (ITA) in July this year. In the webinar, discussions were held on the need to pay attention to the tea gardens of north Bengal to limit trafficking of children and women to distant places in the pretext of jobs.

“A section of the tea population is vulnerable to trafficking and illegal migration. These incidents often go unnoticed as the victims remain silent and in some cases, their families do not report to authorities. This makes it virtually impossible for the management of tea gardens to keep track and take remedial measures. That is why, this initiative has been taken,” said Sanjay Bagchi, the DBITA secretary.

In Dooars, tea estates are spread over 250km — starting from Jalpaiguri district and up till the Bengal-Assam border. “The idea is to evolve and strengthen community-based child protection mechanisms. Initially, the project would be implemented in 26 tea estates of the Dooars and four tea estates of the Terai. A local person from each garden has been selected as ‘community mobiliser’ who will enumerate the data pertaining to the local population and will act on a set of guidelines mooted by experts of the Unicef. They will be in touch with the management and other concerned persons,” said a source.

On Wednesday, the programme was launched at a meeting at the Central Dooars Club in Jalpaiguri.

Representatives of the Unicef and the DBITA were present at the event, along with the managers and labour welfare officers of the 26 tea estates of Dooars where the project would be initiated.