The country boat capsized in the Chupi lake, a haven for migratory birds in East Burdwan’s Purbasthali 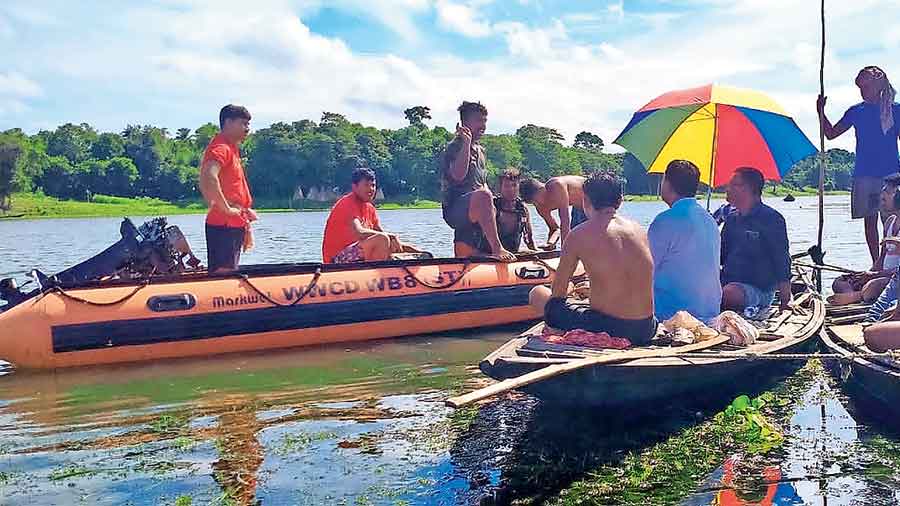 Rescuers try to trace the missing tourist in the Chupi lake on Sunday morning.
Sourced by the correspondent
Subhasish Chaudhuri   |   Calcutta   |   Published 08.08.22, 01:32 AM

Two birdwatchers drowned when a country boat capsized in the Chupi lake, a haven for migratory birds in East Burdwan’s Purbasthali, on Saturday evening.

Police said four persons were on the boat that overturned around 6.30pm. Boatmen rescued two, but the other two could not be saved.

After the capsize, boatmen rescued Tanmay and Tanay who were rushed to Pratapnagar state general hospital in Nabadwip and later shifted to Nadia district hospital in Krishnagar.

The body of Sourav was found late on Saturday and that of Saikat on Sunday afternoon, the police said.

The police detained boatman Madan Parui for interrogation. Parui alleged that the four friends were drunk and kept moving on the boat.

“The boatman claimed all four were drunk and kept moving on the boat which triggered the accident,” an investigating officer of Purbasthali police said.

“We are waiting for the post-mortem report to ascertain the claim of the boatman. We will also ask the two rescued persons on their version,” the police officer added.

Residents alleged that some 100 small country boats sail on the Chupi with tourists on board. Tourists include birdwatchers, but many visit the lake for leisurely drinking sessions, residents said. “Unfortunately there is no one to control tourists and life safety jackets are not offered to them,” a resident said.

Local Trinamul MLA Tapan Chattopadhyay, who visited the lake after the accident, promised to take up the concerns with the district administration. “I will talk to the administration so that security measures are put in place,” he said.

Bengal on Sunday reported 639 Covid-19 infections, 1,121 recoveries and two deaths. Currently, the state has 7,847 active cases, including 219 in hospitals, according to a bulletin.