In Siliguri, slections will be held on January 22 with three other municipal corporations of the state 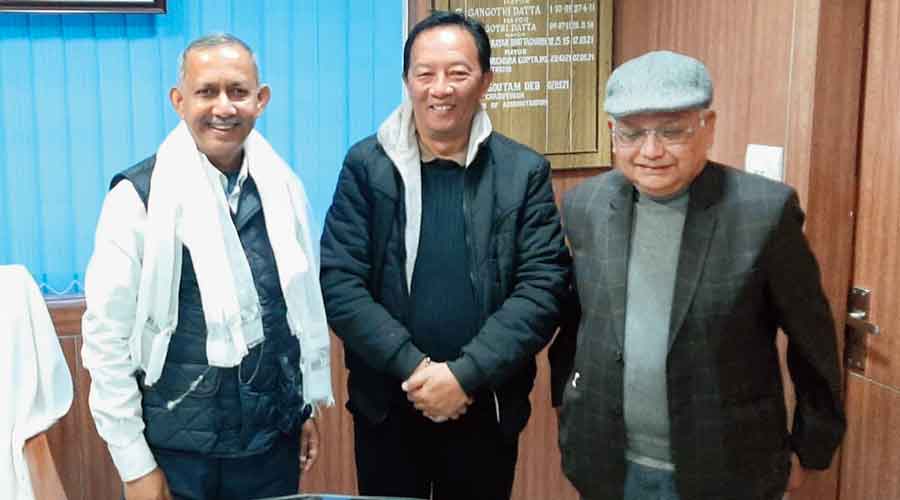 (From left) Gautam Deb with Binay Tamang and Rohit Sharma at the Siliguri Municipal Corporation office on Monday.
Passang Yolmo
Our Correspondent   |   Siliguri   |   Published 28.12.21, 01:24 AM

The Trinamul leadership in Siliguri will field Binay Tamang, former Gorkha Janmukti Morcha leader who is the latest entrant to the party,  in its campaign ahead of the elections of Siliguri Municipal Corporation (SMC), he has said.

He also said he will soon speak with Gorkha Janmukti Morcha leader Bimal Gurung, also an ally of Trinamul, to “work in a united manner for Mamata Banerjee”.

In Siliguri, civic polls  will be held on January 22 with three other municipal corporations of the state.

In 2015, when the last municipal elections were held, the total number of voters in all 47 wards of the SMC was 3.46 lakh.

On Monday, Tamang, along with former Kurseong MLA Rohit Sharma who

has also joined Mamata Banerjee’s party with him, reached the SMC office and met Gautam Deb, Trinamul veteran and chairperson of the board of administrators.

Though Deb called it a courtesy visit, Tamang, after meeting him said that he will join the campaign.

“We will campaign for Trinamul candidates at the SMC elections. We will visit those wards with a sizeable population of Gorkhas,” Tamang said.

“We will talk to Bimal Gurung soon so that we can work in a united manner for Mamata Banerjee. It is necessary to initiate political activities as we want to see her as the Prime Minister of the country in 2024. We want to start with the civic polls here,” said Tamang.

“Among the four civic bodies where elections would be held next month, the SMC is the sole civic body where Trinamul has never been in power. The party is desperate this time to reach the majority mark here and the plan to field Binay Tamang for campaign is yet another strategy to secure the support of Gorkha voters across the civic area,” said a political observer.

“There are around six wards where the support of Gorkha voters decides the fate of candidates in municipal elections. It is evident that every political party, including Trinamul, will try to gain their support,” he added.