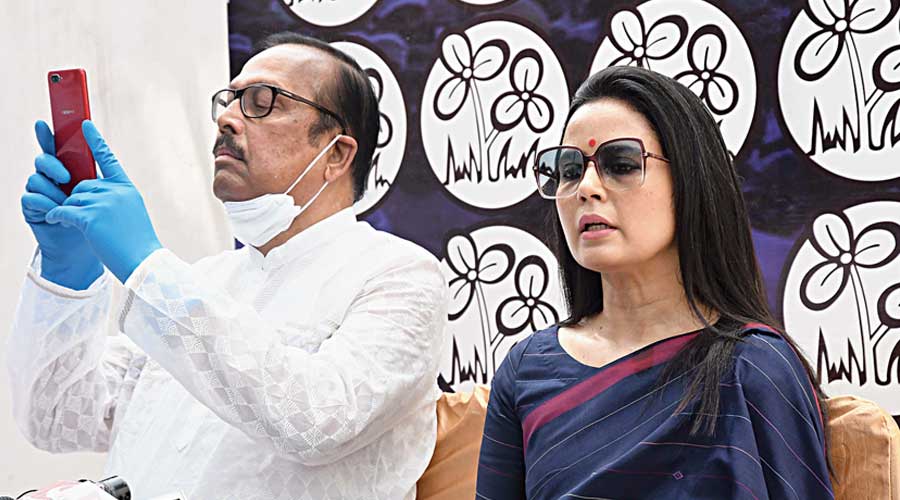 Trinamul on Monday petitioned President Ram Nath Kovind to remove solicitor-general of India Tushar Mehta for his reported one-on-one meeting with BJP legislator Suvendu Adhikari, an accused in both the Narada and Saradha cases, billing it as “impropriety” and “conflict of interest”.

The party’s Rajya Sabha member Sukhendu Sekhar Roy and Lok Sabha member Mahua Moitra met the President on Monday with a memorandum on Mehta’s removal. Kovind accepted it and said he would look into it.

Trinamul raised the pitch on the purported meeting between Adhikari and Mehta ever since reports about the meeting and footage of Adhikari entering the solicitor-general’s residence on July 1 appeared in media. Mehta later said the BJP MLA came unannounced and he didn’t meet Adhikari.

President Kovind served as a lawyer, which the Trinamul memo noted, citing he was “familiar with the rules of practice...”

“The Solicitor General's conduct must be investigated and pending such inquiry, he must tender his resignation” the memo read. “We have reasons to believe such a meeting has been organised to influence the outcome of criminal cases where Mr. Adhikari is an accused person, using the high offices of the Solicitor General...Such a meeting between one of the highest serving law officers of India...who is also appointed as the Special Public Prosecutor of the Central Bureau of Investigation – and an accused person being investigated by the same agency raises extremely serious issues of impropriety.”

A Trinamul turncoat, Adhikari is under CBI scanner in the Narada ‘sting’ and Saradha deposit scam cases. Adhikari, leader of the Opposition in the Bengal Assembly, was in Delhi last week when he met Union home minister Amit Shah. In its memo, Trinamul called the Shah-Adhikari meeting “improper” before the BJP MLA’s purported meeting with Mehta .

Trinamul all-India general secretary Abhishek Banerjee tweeted why Mehta did not release “the 20 mins of CCTV footage of his OWN HOUSE to corroborate his OWN STATEMENT” of not meeting Adhikari. “Mr SG, with such weak defence you can continue serving as @BJP4India’s SECRET GENERAL, not INDIA’S SOLICITOR GENERAL.”

In his clarification, Mehta had claimed Adhikari did visit his residence but was seated in the waiting room and he (Mehta) apologised and conveyed through his staff his inability to meet him.

After meeting the President, Moitra told the media that Mehta’s clarification was “untenable” as one can’t simply saunter into the solicitor general’s residence. “It is news for us and the people of India that the solicitor-general has to apologise to an accused for not meeting him,” she added.

She also iterating the party’s demand tweeted by Abhishek that Mehta release CCTV footage of his house.