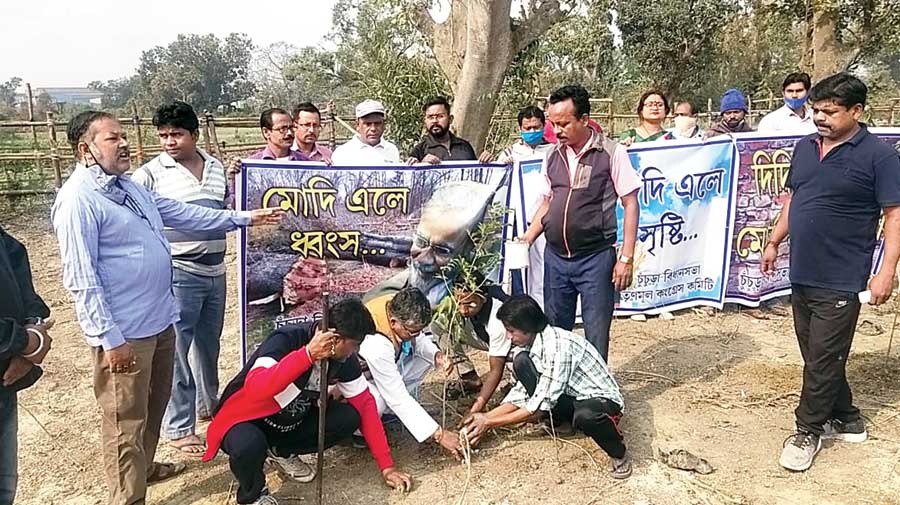 Trinamul leaders and supporters in Hooghly’s Sahagunje plant saplings on the grounds of the closed Dunlop tyre factory on Tuesday
Snehamoy Chakraborty   |   Hooghly   |   Published 24.02.21, 01:12 AM

Trinamul leaders and supporters in Hooghly’s Sahagunje plant saplings on the grounds of the closed Dunlop tyre factory on Tuesday.

The leaders said that they did so as a few trees had allegedly been felled to enable Prime Minister Narendra Modi’s chopper landing on the grounds on Monday. Trinamul leaders also took out a protest rally with slogans like “Modi ele dhongsho, Didi ele sristi (it’s destruction when Modi visits, it’s creation when Didi visits).

Trinamul's Hooghly district president Dilip Yadav said: “As several trees were chopped off to facilitate the Prime Minister’s helicopter landing on Monday, we planted trees as part of our protest against such destructive practices.”

BJP leaders claimed that the branches of a few trees had been trimmed and all was done to meet security requirements.

“No trees were cut off, only the branches of a few trees trimmed, the protest is a Trinamul gimmick,” said Subir Nag, a BJP state committee member and a leader of Hooghly.