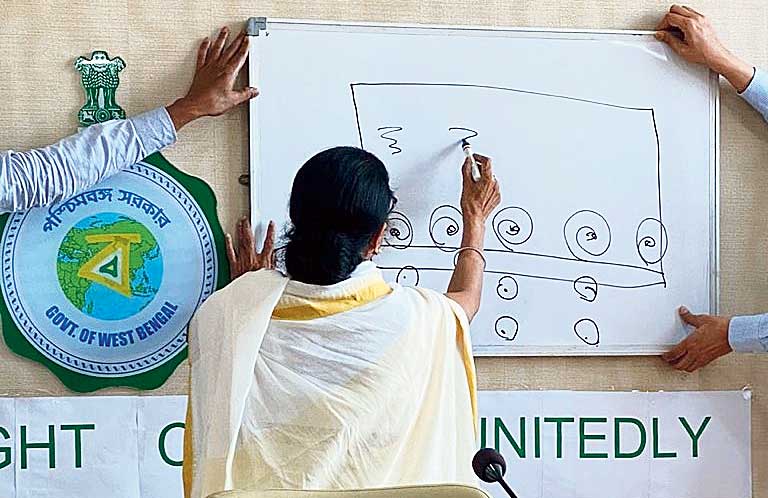 Mamata makes a drawing at Nabanna on Wednesday to explain how social distancing should be maintained in queues
File picture
Meghdeep Bhattacharyya And Snehamoy Chakraborty   |   Calcutta   |   Published 26.03.20, 09:57 PM

The coronavirus pandemic and the resultant lockdown in Bengal have prompted political parties to keep aside their bitter rivalry to stand by the people.

The ruling Trinamul Congress, inspired by chief minister Mamata Banerjee’s proactive approach from the beginning of the crisis, has instructed its leadership in the districts to undertake visits, while adhering to social distancing guidelines, to figure out and address the people’s needs.

The likes of Calcutta’s ward 68 councillor Sudarshana Mukherjee have been executing the instructions with alacrity. Mukherjee has been offering essential support along with her team in areas such as Ballygunge Gardens, Fern Road, Ekdalia, Kankulia, Jamir Lane, Ballygunge Place and Bondel Road in the south of the city.

“Ambulances, doctors on call, medicines, sanitisers, milk, water, puffed rice, eggs, vegetables, fruits… we have been trying to ensure that everyone has access to these basics,” Mukherjee said.

Ballygunge Place resident Sumita Chatterjee, a 64-year-old investment consultant, said: “We appreciate the councillor’s work, especially for the senior citizens. She has been reaching out to the affluent and the underprivileged alike.”

Trinamul is not alone in this. The CPM and the Congress too have formed teams of young men and women, guided by local leaders, to undertake similar activities.

“This is the time to rise above differences and close ranks against the pandemic. Across the state, we have been doing our bit to help the people out during the lockdown. Besides, of course, standing by the state government in its efforts,” said Left legislature party leader Sujan Chakraborty.

All Left MLAs in Bengal have donated Rs 10 lakh each from their area development funds to the district magistrates. Several Congress leaders and lawmakers have also chipped in.

All Trinamul lawmakers, in the Assembly and in Parliament, have been donating from their area development funds and salaries to the relief fund set up by the chief minister.

“Everywhere, our leadership and workers are aware of their duties and responsibilities in this war against the pandemic. They have been issued instructions. They have been watching our supreme leader (Mamata) and taking notes from her regular briefings…. On the ground, they have been diligently doing what is expected of them,” said Trinamul secretary-general Partha Chatterjee.

The BJP’s MPs and MLAs have also been making contributions from their area development funds to the districts’ administration.

“Now, more than ever, is the time to set aside our differences for the common, greater good. Our Prime Minister has been showing the way, we have been doing our bit here,” said BJP national secretary Rahul Sinha.