Even though Lama ‘opens’ the library on Sundays, the initiative has pushed substance users off the site 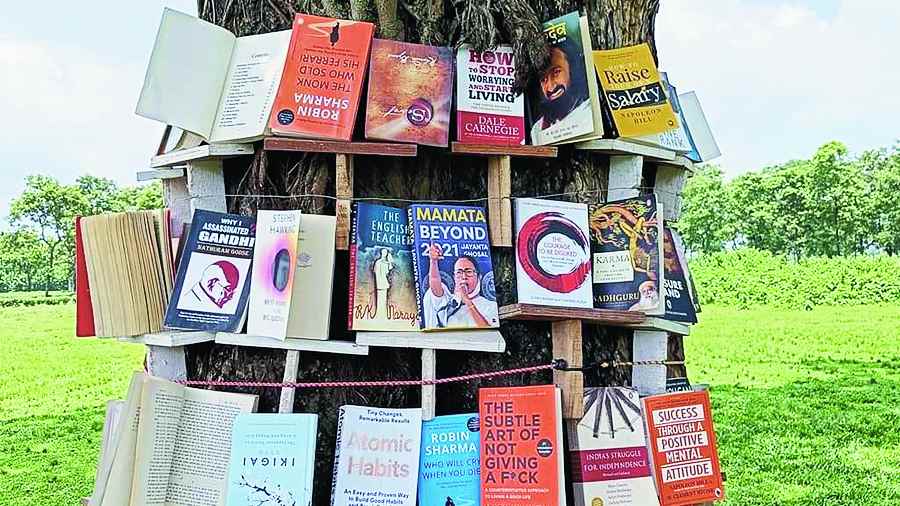 Books raining down a tree in Alipurduar are not just driving out loiterers and addicts from the 109-year-old European Club ground, but also spreading the joy of reading.

Nimesh Lama, 25, an unemployed graduate from Kalchini, has hung and placed books on a rain tree, a species of a flowering tree in the pea family, on the ground of the European Club of Dima tea estate, some 30km from Alipurduar.

Lama’s idea behind starting the open-air library was to get rid of alleged drug addicts who would constantly loiter in the area and at the same time spread the joy of books in the tea belt.

The youth said he came up with the idea as he did not have the wherewithal to physically drive out addicts.

People gather on the European Club ground in Alipurduar to read books of the tree library on Sunday.
Anirban Choudhury

“I did not have the physical ability or other means to chase them out of the ground. I discussed my idea to start a tree library with my friends. They appreciated it and also helped collect books as my finances are limited,” said Lama.

Even though Lama “opens’ the library on Sundays, the initiative which started two months back has pushed substance users off the site.

In the past, local residents and even the administration had tried to cleanse the area of substance users from the European Club ground but to no avail.

The club, which was set up by European managers of 13 tea gardens in 1913, was also used to play golf by the tea officials. However, the ground went into disuse and about two decades ago hooligans started decamping with the bricks and other materials of the club.

Slowly, goons started taking control of the ground where today there is no sign of any club building.

But now, thanks to Lama, every Sunday, the young and old take out the time to visit the tree library and spend their time reading the diverse collection under the shade of the tree.

The books include works in Bengali, Hindi, Nepali and English language.

Lama, who has always loved books since his childhood days, said he “loves to spend his Sunday with books and book lovers”.

The initiative is also attracting tourists. Biswajit Saha, the owner of a lodge near Jaldapara, the wildlife sanctuary in the Dooars, said: “I take tourists to the tree library and they appreciate Lama’s initiative.”