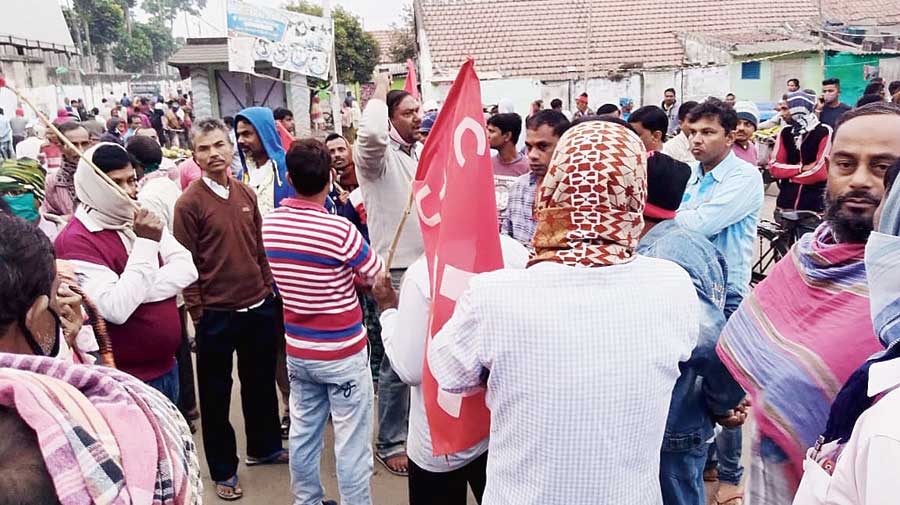 The Left in Bengal claimed workers in the industrial belts of Durgapur and Asansol and jute mills in North 24-Parganas and Hooghly “spontaneously” backed the bandh called by trade unions against the Narendra Modi government’s “anti-people” policies.

“Bank employees, workers in the PSUs and officers of both central and state governments protested against the anti-people policies of the Union government. We haven’t seen this kind of a positive response from people in the past few years,” CPM politburo member Mohammed Salim said on Thursday evening.

From early Thursday, leaders and supporters of Left and Congress trade unions — which had called the nationwide bandh — hit the streets to ensure shutdown. Though the impact was minimal in Calcutta, industrial belts of Nadia and North 24-Parganas saw near-complete shutdown. The Kalyani industrial belt also wore a deserted look.

The Left trade union leaders claimed the strike was a major success in the jute mill belt in North 24-Parganas with only one — the Meghna Mill — operating among 22 mills between Bijpur and Baranagar.

According to Bengal Chatkal Mazdoor Forum’s state panel president Nabendu Dasgupta, “spontaneous participation” of 70,000 jute mill workers in North 24-Parganas proved workers were “refusing to be wooed by the BJP and Trinamul”. The Left produced similar examples from industrial belts in Hooghly, West Burdwan to claim an “anti-BJP and anti-Trinamul mood”.

Though top Left and Congress leaders equated the BJP and its policies with that of Mamata Banerjee’s government, some of their leaders in the lower rungs admitted that Trinamul’s tacit support by way of endorsing the issues played a positive role.

The fact that Trinamul was not actively opposed to the strike was clear from the chief minister’s comments at the state secretariat: “I believe today workers are in a movement…though we don’t support strikes in principle. The Union government is selling off everything from Coal India to railways to civil aviation.”

The trade unions had given the bandh call to press for its demands such as cash transfer of Rs 7,500 per month for all non-income tax-paying families, hike in minimum wages, withdrawal of “anti-farmer laws” and “anti-worker labour codes”, and to protest privatisation of public sector entities.

The strike however bared a pragmatic loophole.

A senior Left leader said: “The biggest sufferers of the Centre’s policies are workers in the unorganised sector without a voice... Opposition to anti-people policies of the Centre can create an effective resistance only if these marginalised sections can also be made a part of the movement.”