The trio were members of a mobile patrol team 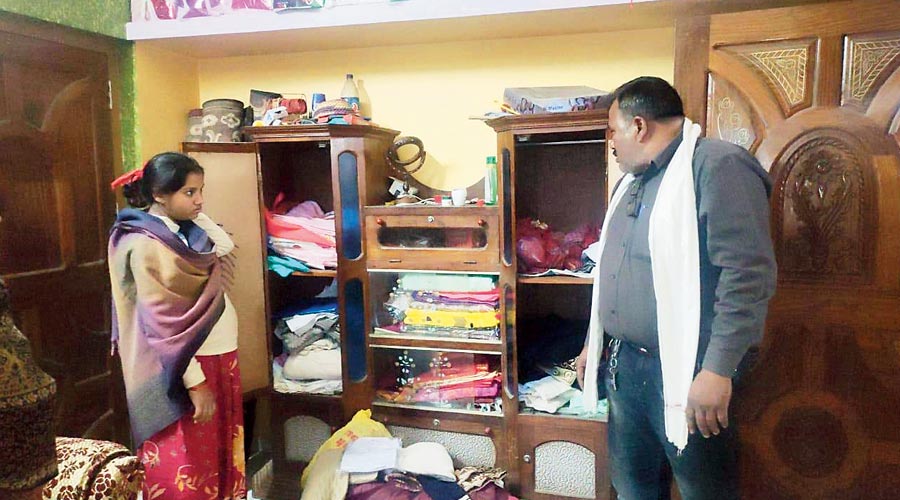 The labour contractor’s house after the loot in Kaliachak of Malda district on Wednesday.
Picture by Soumya De Sarkar
Soumya De Sarkar   |   Malda   |   Published 20.01.22, 02:17 AM

Three police personnel, including an assistant sub-inspector, posted at Kaliachak police station in Malda district have been suspended for allegedly stealing Rs 25 lakh and gold worth around Rs 14 lakh from the house of a labour contractor on the pretext of a raid on Tuesday midnight.

Senior police officers who admitted after a probe that the raid was fake, however, said the labour contractor had managed to get back the cash and the gold soon after the operation.

Sources said the trio turned up at the house of Esrarul Haque at Kaliachak here and asked him to open the main gate.

Haque, who supplies manpower to construction sites in Bengal and other states, opened the gate and allowed them in.

He said he had Rs 25 lakh with him for paying the workers. “I told the cops that I have proper documents of the cash transactions. They, however, ransacked the furniture and took away the cash and gold ornaments weighing around 340 grams,” added Haque.

On Wednesday morning, senior police officers came to know about the “raid” following a complaint lodged by Haque.

Amitabha Maiti, the district police chief, ordered a probe which was started by Anish Sarkar, the additional superintendent of police (rural).

The suspended trio were ASI Pijush Mandal, and constables Rajkumar Ghosh and Ashish Deb. They were members of a mobile patrol team.

“It is a blatant violation of police rules. It has been further found that they did not even make a seizure list of the items seized from the house,” said a police officer.

The police, however, claimed that the trio did not take away money and jewellery with them. “Whatever was seized during the fake raid was taken away by Haque when he jumped from the police vehicle,” the officer added.