Water flooded the Delhi-bound NH2, prompting the administration to restrict the movement of vehicles on the busy highway 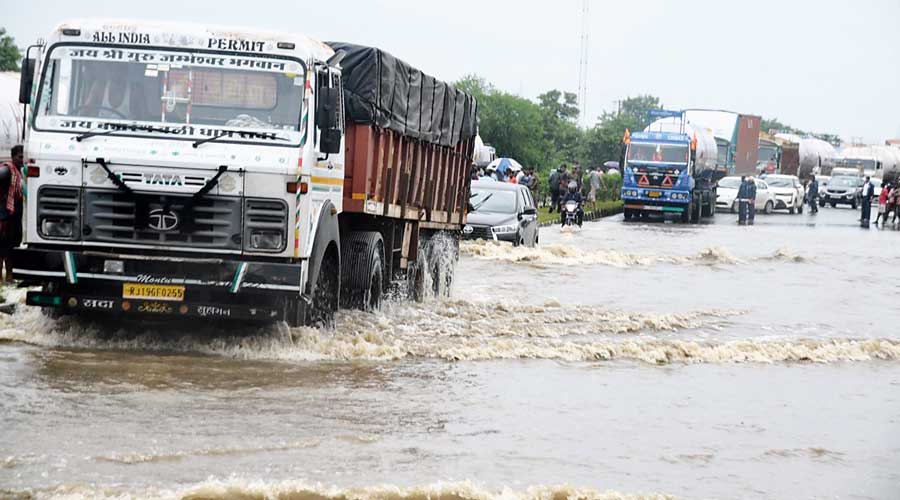 Three persons were killed on Thursday in accidents triggered by heavy rain in West Burdwan.

Police said the body of Nasim Ansari, 25, a resident of Railpar in Asansol was found floating inside his single-storey house on Thursday morning.

Anil Keora, 50, a resident of a riverside road in Burnpur, and Sukurmani Besra, 65, of Barabani block were killed when a mud wall fell on them while they were asleep early on Thursday. Both were declared dead on arrival at the Asansol district hospital.

Homes and property suffered heavy damage as almost entire Asansol and its adjoining areas, as well as Bankura, were inundated with consistent rain since Wednesday.

The Met office in Calcutta recorded 434mm rainfall till 6am on Thursday only in Asansol. It is the highest that the town has seen in four years.

Water also flooded the Delhi-bound NH2, prompting the administration to restrict the movement of vehicles on the busy highway.

West Burdwan district administration had to call in the army from Panagarh Military Station to rescue people in some waterlogged areas in Asansol after the local disaster management team failed.

“We had to call one company of army jawans from Panagarh to help us rescue people from waterlogged areas. The National Disaster Response Force (NDRF) also has joined us in rescue operations,” said a district official.

Some residents of Railpar and Kalla of Asansol protested against the alleged delay in rescue operations when district magistrate Arun Prasad and police commissioner Sudhir Kumar Nilakantam came to inspect the areas.

Many residents also said they could not recall such rain-induced danger in recent memory.

“Half of my two-storey house in Railpar area got flooded. I had to stay on the terrace till nearby residents rescued me in the morning,” said Mohammad Iqbal.

“We have rescued people from waterlogged areas and also given them medicines and food. We have set up relief camps in schools,” said an official.