The saga of saffron defeat at civic polls: 24% drop in BJP’s vote share 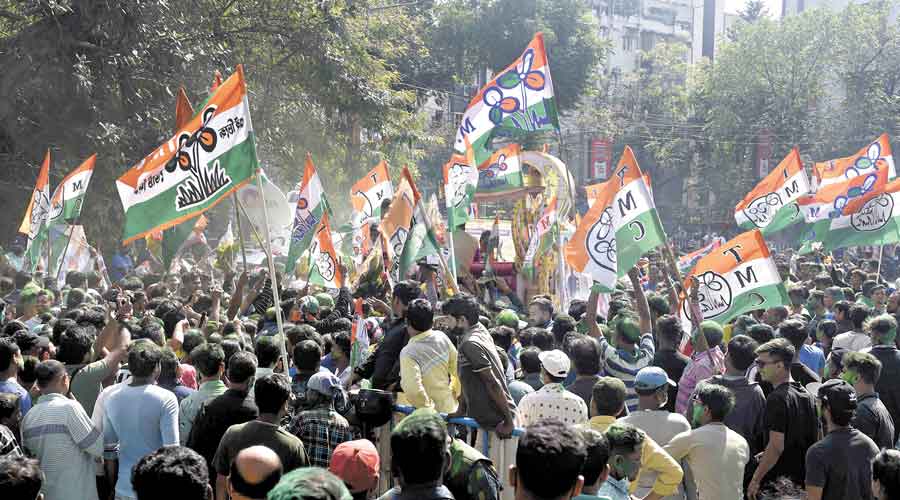 The trend of a slide in BJP’s vote share that started with the Calcutta Municipal Corporation elections in December last year continued on Monday as results of four municipal corporations showed a decline of around 24 per cent votes in comparison to what the party had got in these uran areas in the Assembly polls barely eight months ago. In contrast, the Left’s vote share has continued to increase.

The election results of four municipal corporations — Bidhannagar, Siliguri, Asansol and Chandernagore — on Monday indicated a drop in BJP’s vote share, while the Left parties, mainly the CPM, increased its share of votes from what it had achieved in these areas last year. Left candidates, primarily the CPM, came second in over a hundred seats out of the total 226 wards that went to the polls on February 12.

The Calcutta Municipal Corporation elections in December also indicated a slide in BJP’s fortune as the Left Front and the Congress alliance came second in around 80 per cent of the total 142 seats and the vote share of BJP bleed by 20 per cent.

“For a party that secured over 38 per cent votes across Bengal in the Assembly polls, the vote share has come down to under 10 percent in two out of four municipal corporations. The recent polls show that our voters have started to shift from us to the CPM as well the Trinamul. We don’t know what awaits us in the 108 municipalities that will go to the polls on February 27,” said a senior BJP leader.

The BJP’s vote share showed a steady decline in all the four civic bodies even though the best performance for the saffron camp happened in Siliguri and Asansol. Despite the decline, the BJP managed to bag 12 seats, while the CPM got nine seats in the four civic bodies.

In Siliguri, the BJP had secured 50.03 per cent votes in the Assembly polls last year and this time the party got only 23.24 per cent votes, a decline by 26.79 per cent.

In Chandernagore, the BJP’s vote share in Assembly polls was 30.60 per cent that sharply declined to 9.8 per cent this time, a decline by 20.80 percent.

Interestingly, the Left, mainly CPM, performed far better in comparison to the assembly polls last year when the party could secure only 4.9 per cent votes. The Left, Congress and the ISF taken together had secured 9.81 per cent votes.

“The people of Bengal have rejected the saffron as second to the Trinamul. People here now have realised that the alternative to the Trinamul is only the Left Front,” said CPM veteran Sujan Chakraborty.

Political scientists like Biswanath Chakraborty, however, said the sharp decline in BJP’s vote share had helped the Left find its ground as an Opposition but a lion’s share of BJP votes had gone to the Trinamul.

“It is a clear indication of a shift in Opposition votes from the BJP to the Left, a trend that started with the Calcutta civic polls last year. It is very interesting that the BJP has lost a large share of its voters with a span of only eight months,” said Chakraborty.

“The point is the votes from the BJP are not only going to the Left but also to the Trinamul. As a result, the Left is certainly gaining back its position but it the growth is still marginal and slow,” he added.

As soon as the result came out, several BJP leaders blamed the setback to rigging as well as organisational weakness from the state level to the districts.

BJP spokesperson Shamik Bhattacharya said: “The result of the four civic bodies was expected as we know how the polls were conducted. Our candidates were attacked inside booths and bullets flied. Now the high court has to understand this as it had faith on the state election commission that had assured to conduct free and fair polls with the state police. The police failed to disburse any gathering or arrest fake voters.”

Supporters of a BJP winner in Asansol on Monday.
Santosh Kumar Mondal

The BJP on Monday moved a petition before Calcutta High Court seeking postponement of the second phase of elections in the remaining 108 municipal bodies until the government decided on holding the polls with central force and under proper monitoring of independent observers.

In a separate petition, the party sought cancellation of the polls of four civic bodies that took place on February 12. The petition claimed that the high court had entrusted the responsibility to the commission to hold peaceful elections. Since the commission had failed to perform its duty properly, the commission should be prosecuted. The court is likely to hear the cases on Tuesday.