The river gives, the river takes

Ten years ago, Cyclone Aila had devastated the islands in the Sunderbans, killing over 300 people 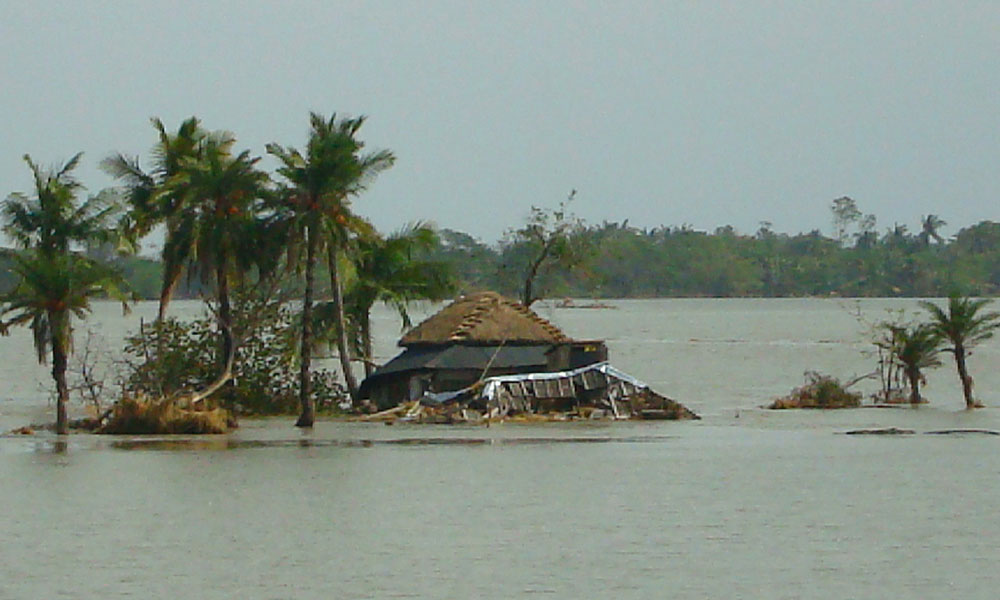 In tide country — the Sunderbans — the line separating land from water can blur, much like the border between fact and fiction. Nirmal, the idealist schoolteacher in The Hungry Tide, Amitav Ghosh’s novel set in bhatir desh, had lost his mind after watching stormtroopers ravage Marichjhnapi, the island that was forcibly rid of refugees by a Communist government in 1979. The man whom I met near the ferry ghat in Lahiripur some years ago had lost his mind as well — to a storm. Ten years ago, on the morning of May 25, Cyclone Aila had devastated these islands, killing over 300 people. Ever since then, that unnamed, deranged man, I was told by some of Lahiripur’s residents, can be seen roaming the river bank. He stares at the quiet water, picking up bits of stone and pebble now and then. Then he throws them into the river, and watches the debris sink. If one were to ask him what he is doing, he says, his eyes blazing for just one lucid moment, “I am building a bund. For there is a storm coming.”

One can come across many such instances of derangement in the Sunderbans. After all, this is, as Ghosh has predicted, the age of Great Derangement. So a panchayat member in Emilybari would inform visitors with evident pride that the government had released funds to undertake a beautification drive in his village, embellishing the serpentine, unmetalled roads with such trees as the puny shonajhuri and eucalyptus but not the sturdier and useful hargaj or kalo bain.

A year after the storm, the then government had been struck by another bout of its periodic insanity. The Sunderbans, it had declared in its delirium, would compete in a global contest to find out the New Seventh Wonder of the natural world. However, the islands were voted out of the contest. The voters, saner than the powers-that-be, may have got wind of some of the true wonders of the Sunderbans: an ominous rise in sea surface temperature and sea levels, aggravating the threat of inundation which would, in turn, raise salinity levels in the soil; a dangerous rate of soil erosion; embarrassing poverty levels and significant dependence on agriculture, an occupation that yields meagre returns; creeping food insecurity combined with a shocking rise in the rates of migration and trafficking of women and children; the decimation of the tradition of growing indigenous rice varieties that were resilient to Sunderbans’ difficult conditions; the encroachment of the tourism industry on a fragile ecological zone; rickety bunds that remain vulnerable to the swelling waters and so on.

The climatic threats and resultant ecological degradation are discussed often. But what is seldom talked about is the madness sweeping the region like a plague.

Thousands of tourists infest the tide country; among other places, they are taken around, in boats and polluting tuk-tuks, to the Sajnekhali watch tower, the crocodile sanctuary at Bhagabatpur, an old temple in mystical Netidhopani and Kalashdeep. But they return knowing little about bhatir desh.

Sitting in a wobbly country boat passing a stretch of forest on my way to remote Tipligheri, I had once seen a Calcuttan point to the jungle and declare — with all the gravitas that he could muster — to his awe-struck but nervous brood that each of the trees is a Sundari gaachh. The boatmen said nothing. They are not supposed to let out the jungle’s secrets, one of which is that the outbreak of agamora, a botanical disease, combined with accelerated salinity in the rivers, has nearly destroyed the Sundari. Has not madness, over the years, fattened itself on ignorance?

Even the bewitching beauty of tide country is not enough to conceal what must stay hidden. I had once spent a night near Satjelia, watching the river turn, slowly, mesmerisingly, into liquid silver by the light of a full moon. The forest, across the waters, lay still and bright, aglow with the iridescence of fireflies. My friends, a primary teacher and a majhi, however, had their eyes fixed not on the sky or land but on the water. Bhora kotal, a particularly malevolent spring tide, was expected. The village was rife with anxious whispers of an imminent breach in the mud embankment.

“There’s a storm coming,” the teacher said in a low voice, echoing the mad man of Lahiripur, who spends his days building his phantom bund around a predatory river.