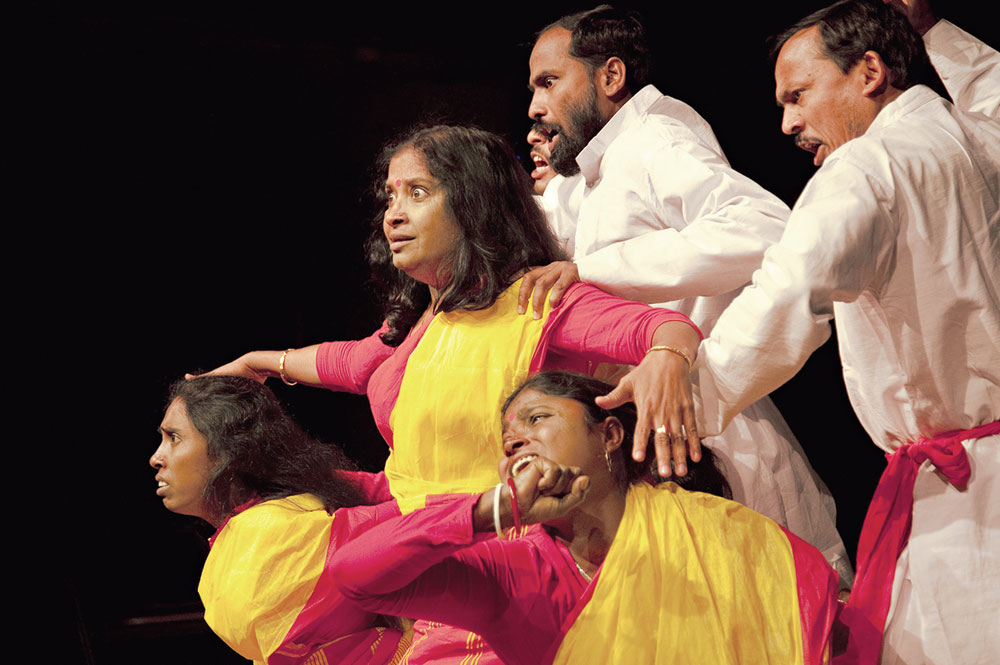 Sonar Meye being staged at a theatre festival in Paris
Sourced by The Telegraph
Moumita Chaudhuri   |   Published 25.05.19, 05:55 PM

When they reconvened, the villager who had disagreed was ready with his argument. He made the point that the guilty man was a poor man and it was his poverty that had made him steal the vegetable in the first place. Now, if a fine was imposed on him, in all likelihood he would resort to theft again — to pay the fine. In the circumstances, the villager suggested that the man be made to ask for forgiveness.

Much to Ganguly’s surprise, the other villagers agreed with this view. Curious as to what had moved them to change their mind, Ganguly met Ishwar Hembram, one of the villagers, and asked him the reason behind the unusual verdict. Ishwar brought out his conical fishing net woven around a couple of sticks and as he showed it to Ganguly, he said, “If I remove one stick, I will still be able to fish with it but slowly the others will come loose.”

Earlier the Jana Sanskriti productions were based on issues that Ganguly thought to be relevant. Now the issues are selected in the course of workshops or gaming sessions, organised by Jana Sanskriti centres, from among a host of issues flagged by villagers. “Moreover, the oppressed now comes on stage and enacts his or her story,” says Ganguly.

He talks about one of the gaming sessions wherein a young boy named Bakum spoke up. This was his situation. His father had two wives. He was the son of the first wife but he wanted to accept the second woman too as his mother. He was witness to regular fights between the two women and he had to intervene often and mediate.

Sanjoy Ganguly at a workshop with a theatre group in Bradford, UK
Sourced by The Telegraph

A scene from Khelar Ghar, an adaptation of Henrik Ibsen’s Doll’s House, in Calcutta
Sourced by The Telegraph

Sometimes he was frustrated and often he felt helpless. He was not able to make up his mind about what he wanted most. Says Ganguly, “During the gaming session, we ask other participants to pose as conflicting desires of the solution-seeker. One person might pose as the desire to leave the house, another might say he wants to beat up the father and yet another one might want to turn away the second wife. Bakum had to engage and argue with each one of them and find out which desire prevails in the end.”

Once a session such as this is over, the plot is firmed up and readied for the stage. Says Ganguly, “The entire situation is enacted in the form of an open-ended theatre. We have a forum soon after the theatre wherein a moderator facilitates a dialogue between the actors, and the audience and tries to discuss a possible solution.” In the process, according to the theatre activist, “spectactivists” are born — spectators who become real-life activists.

But the solution does not become apparent the moment a play is staged. According to Ganguly, the same play is staged three or more times in the same village. He says, “After the first show, the discussion that happens might yield nothing. The discussion session is more mature after the second show that is held after a gap of a fortnight. But mostly it is during the third session that we are able to come up with a concrete analysis of the situation and some solutions worth considering.”

Today, Ganguly is a far more satisfied theatre person than what he was, when he had started out. He says, “I have managed to break down age-old perceptions that were instilled in their minds as the right-thing-to-do.”

And to think, none of this would have happened had it not been for a woman named Phoolmoni.

Sarama was gang-raped and thereafter she became pregnant. She did not know what to do. It was just before the general elections. The ruling party left no stone unturned to bury her story; the Opposition did just the opposite. From contemplating suicide, Sarama gradually came to terms with her predicament and eventually decided to give birth to her child. Sanjoy Ganguly wrote the eponymous play, Sarama, in 1989.

It was being staged in a village in Bengal’s Birbhum district, when after the show, a Santhali woman called Phoolmoni approached Ganguly. “According to you, is Sarama a very strong and powerful woman,” she asked. Ganguly replied in the affirmative.

Phoolmoni looked him in the eye and said unabashedly, “You know the kind of family I come from. I am the only earning member. I work at the pathar khadan or stone quarry. Sometimes I have to go to the stone-crushing factory too. There, when the contractor calls me to meet him privately, I have to go. I cannot say, ‘No’. I will not have the job the next day if I do. And after that, each and every day I come back home, do my household chores, look after my children and my husband and then go back to work the next day. Tell me, am I powerful? Am I strong?” Phoolmoni’s question left Ganguly shaken. He tells The Telegraph, “I realised I could not provide a solution to these people. Propaganda theatre was not the way to teach them. I did not raise the right questions. How could I then solve their problems?”

In 1991, Ganguly met Augusto Boal in Paris. The Brazilian theatre practitioner and political activist had been exiled; the military regime in Brazil considered his teachings a threat. In the 1970s, Boal had founded what is known as The Theatre of the Oppressed, a theatre that addressed social and political change and engaged actively with the audiences to impress upon them the experience of the very change they were advocating. Boal told Ganguly not to use theatre as a problem-solving tool. “Rather try to develop a critical analysis of the issues,” he prescribed. That year, Ganguly restructured his theatre group, Jana Sanskriti, founded in 1985.

Ganguly works in the remote villages of Kakdweep, Pathar Pratima, Kulpi — all in the South 24-Parganas and the Sunderbans area. Today the group has 33 satellite teams in villages across Bengal. Over the last three decades, he has also taken Jana Sanskriti to Delhi, Maharashtra, Uttar Pradesh and Haryana. “Our first team did not have any women’s participation, but now 60 per cent of the actors are women. In fact, there are villages where women play men’s roles,” he says. But the most important change of all has been the change in Ganguly’s approach to the creative arts.

He says, “I went to the margins where there is no way of accessing the art of theatre. I realised art is a basic need but the marginalised do not ask for art — it is not their basic need. To them development means housing, toilets, electricity, food.” The 60-year-old says it is then that Boal’s words came alive for him. “I was suddenly aware how the marginalised had been denied the very grammar of art, and in the process they had been distanced from the thinking space.”

Ganguly’s narration is replete with anecdotes of grit. He talks about a time when a group of villagers were presiding over a case of theft. A man had stolen an eggplant. Nine of the 10 men sitting in judgment decided that the guilty had to pay a fine of Rs 50. One of them disagreed but said he could not explain the reason behind his decision just yet. “The rule of thumb is to go with the majority decision,” says Ganguly. He adds, “But in this case the villagers decided to meet again the next day.”