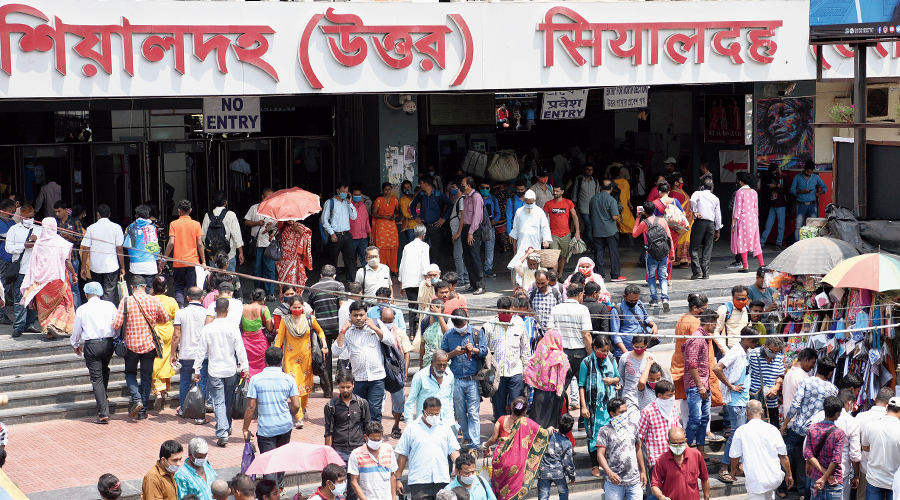 A 13-year-old boy found with a Covid-positive report at the Sealdah railway station parking lot has told officials that he was abandoned by his father on Monday morning.

The officials are yet to verify the account with the father of the boy. As the parent does not have a mobile phone, the officials had been unable to contact him till Tuesday evening, a Childline official said.

The father — a daily wage earner from Diamond Harbour — had taken his only son to a city home as the parent was finding it difficult to make ends meet, the child told the railway officials who spotted him at the parking lot around 11am on Monday.

The home wanted the child to undergo a Covid test first before admitting him. After the positive rapid antigen test report found in the boy’s hand suggested he had contracted Covid-19, he was not allowed in the home.

The father, who apparently had no other means, left the child at the Sealdah station compound, the teenager has told the officials.

Railway officials found the child standing alone in the almost deserted parking lot on Monday morning, lost and confused. Asked, he managed to say that his father had left him there because he was “ill” and handed out the report he was carrying.

Members of the NGO Childline later shifted the boy to a state-run safe house with the help of health department officials.

“He (the boy) was not crying. But he was looking dazed and confused. He did not even have a mask. When we asked about his family, he could barely answer. He showed us the rapid test report and said he was ill and that was why his father had left him,” said Debprasad Mandal, a member of the NGO’s arm that works with the railways.

station — identified the boy by his name and mentioned his age as 13, Mandal said. The report mentioned that a fee of Rs 1,000 had been collected for the test. It is not clear who paid the money.

A few minutes later, after a lot of coaxing, the boy drank some water and ate biscuits that were offered to him, Mandal said, adding that the boy told them his mother had passed away.

Mandal said the Child Welfare Committee and the Swasthya Bhavan had been informed of the incident.

An official of the Child Welfare Committee said they had been receiving several cases where the parents were unable to take care of their children.

The committee will try to locate the child’s father by taking the help of police. “We try to counsel the parents who abandon their children. Every child deserves a family. If the family refuses to accept the child, the child is sent back to the care home,” said an official.