Advertisement
Home / West-bengal / Team spirit at its peak for Arjuna

Team spirit at its peak for Arjuna 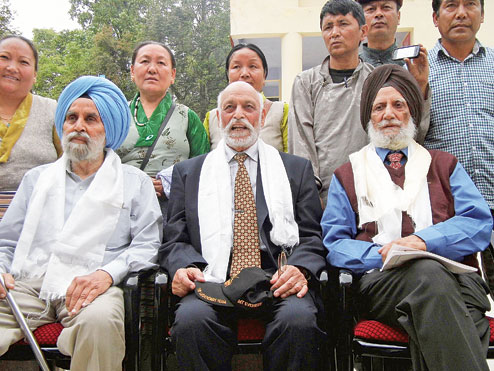 Darjeeling, May 29: The first successful scaling of Mount Everest by a team sent by the Indian government in 1965 was always considered an epitome of team spirit, but the captain of the group today recalled how it endured well after the expedition.

Captain (retired) M.S. Kohli, who had led the 19-member team, said the government had to backtrack from a decision to confer the Arjuna Award on only a few of the climbers following pressure from him.

"We were told (in 1965) that the Arjuna Award (the highest award in sports in India) would be conferred on 11 members of the team. The government had finalised the names of the expedition leader, the deputy leader and nine climbers who had set foot on Everest," Kohli told an event at the Himalayan Mountaineering Institute here today.

The event was held to felicitate the team on the golden jubilee of the expedition and to mark the 101st birth anniversary of Tenzing Norgay Sherpa, the first to climb Mount Everest, along with Sir Edmund Hillary, on May 29, 1953.

The deputy leader of the 1965 Everest expedition team was Captain N. Kumar.

"I attended a meeting with the government officials who told us that 11 members would be given the award. I immediately put my foot down and told them that if the government planned to honour the members, then they would have to honour the entire team as the expedition was a team effort," said Kohli.

The meeting, according to Kohli, dragged on for three to four hours. "The officials maintained that it was not possible to give the highest award to all the members and they normally gave the award to only one member of a team who had excelled. The officials contended that they had already decided to confer the award on 11 members," said Kohli.

"I realised that the government officials were not willing to budge from their stand. It is then that I told the officials that if the Arjuna Award was to be given, it had to be one award and it should not be for any individual but for the entire team," said Kohli.

Finally, the entire team was given the Arjuna Award by the government. "Till date, ours is the only team in the country to get an Arjuna Award and we have always been proud of this."

The award is currently kept at the Indian Mountaineering Foundation in Delhi.

The 1965 Indian team had set two world records. The team had created a world record by sending the most number of climbers to the Everest peak. Nawang Gombu, a member of the team, also became the first man to climb Mount Everest twice. Gombu had scaled Everest once before in 1963, along with Jim Whittaker, in the first successful US expedition.

On May 20, 1965, two members of the expedition, Capt. A.S. Cheema and Nawang Gombu, climbed the peak on the first day. Two days later, on May 22, Sonam Gyatso and Sonam Wangyal reached the summit and on May 24, C.P. Vohra and Ang Kami scaled Everest only to be followed by Captain H.P.S. Ahluwalia, H.C.S. Rawat and Phu Dorji on May 29, 1965.

Of the 19 climbers who scaled the Everest in 1965, nine are alive and three attended the felicitation today. Apart from Captain (retired) M.S. Kohli, Brigadier (retd) Mulk Raj and G.S. Bhangu were present in Darjeeling today.

"Sonam Wangyal and C.P. Vohra had to drop their plans at the last moment because of illness in their families," said Chaddha. However, the next of kin of Captain A.S. Cheema, Sonam Gyatso and Sonam Wangyal were present at the event.

Talking about the 1965 expedition, Brigadier (retd) Mulk Raj said: "I was part of the 1962 Indian expedition team led by Major John Dias. The Indian team had failed to summit the peak by a few hundred meters in 1960 also and Major Dias had told us to make it a mission and not just a another expedition to climb Everest."

"The entire expedition was a team effort. We carried head loads to ensure that those who would make a bid to the top remained fresh. We used to relay our weather information to Delhi and the All India Radio would give us an update on the weather conditions. We would hear the AIR bulletin for the weather details. We had also sent chappatis and pickles to the top for the climbers. Such was the team spirit," said Mulk Raj.