Humayun Kabir and Ardhendu Biswas, teachers of government-run schools in Murshidabad have set for themselves the task of distributing one crore saplings free of cost 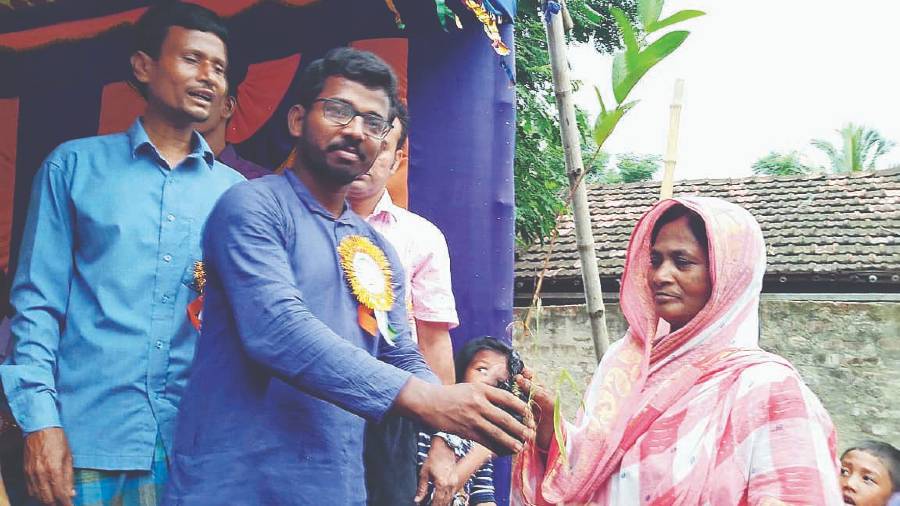 Two teachers of government-run schools in Murshidabad have turned green crusaders and set for themselves the task of distributing one crore saplings free of cost.

Humayun Kabir, 29, and Ardhendu Biswas, 29, met three years ago when both got employed as school teachers in Murshidabad’s Beldanga area.

Biswas, an English teacher at the Kumarpur Primary School in Beldanga, and Kabir, a chemistry graduate, teaching at the Kumarpur High School, met at the Sargachhi Ramakrishna Mission auditorium where both were volunteering for an environmental programme.

Three years on, the youths, both residents of Chandpara village in Murshidabad, have returned to the same venue several times as organisers, attempting to steer a plantation drive for 1 crore saplings.

“When we met each other, we realised we had the common goal of environmental well-being,” said Kabir.

The duo funds the Mission Green Universe forum, which they kicked off at the same auditorium in January 2019 in the presence of 1,000 youths.

“This is funded out of our own salaries. All we ask is that volunteers accept a sapling from us and plant it somewhere,” said Biswas, explaining the duo’s efforts spread to weddings venues, birthday parties and public ceremonies.

Biswas said each of them shelled out around Rs 5,000-7,000 to fund the drive every month. Biswas and Kabir both nurture the saplings at nurseries set up at their own homes. “We have already distributed nearly two lakh saplings of common trees, including mango, guava, java plum (jamun), litchi, and mahogany. We want to see one crore saplings planted before too long,” Biswas said.

Depending on the area one has, the green crusaders also distribute flowering and decorative trees as well.

Asked about plantation venues, he said most saplings were being planted by them and by volunteers on public land near schools, waste lands, or parks.