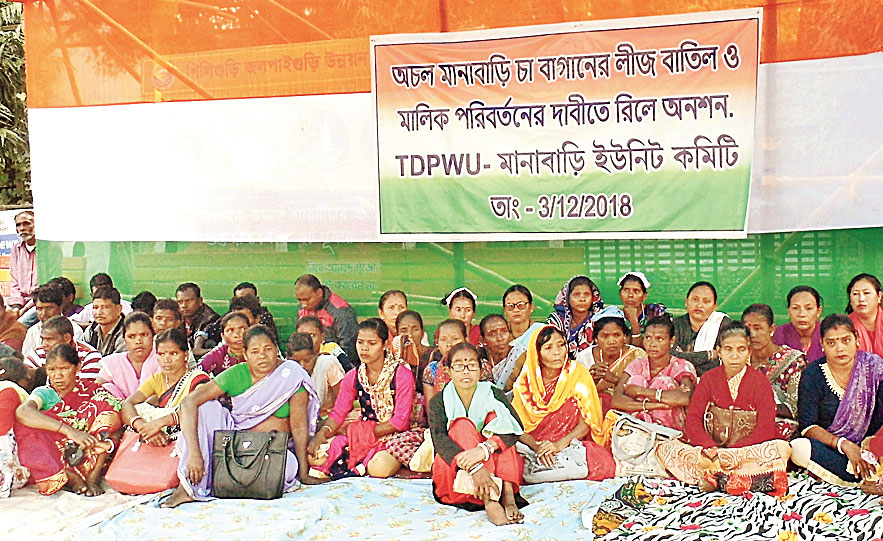 The relay fast by the workers in front of Malbazar police station on Monday.
Picture by Biplab Basak
Our Correspondent   |   Jalpaiguri   |   Published 03.12.18, 08:14 PM

Workers of a tea garden shut for over two years launched a relay hunger-strike in front of Malbazar police station on Monday under the banner of a Trinamul trade union, demanding that the estate’s lease be cancelled and it be handed over to a new owner.

Manabari tea estate in Malbazar block has been closed since October 8, 2016. It has around 750 labourers. The fast was launched by the Terai Dooars Plantation Workers’ Union backed by Trinamul.

“The garden had closed down and reopened at least thrice in a span of eight years, that is, from 2008 to 2016. On July 27, 2016, the estate reopened after a new company took over it. The new management, however, ran the garden only for around three months and abandoned the estate on October 8, 2016 without serving any notice,” said Pulin Goldar, a leader of the union.

A section of the labourers has already left Manabari, while others crush stones on riverbeds and work for daily wages.

“We have come to know that the Bengal labour department has called a meeting of trade unions and the management in Calcutta on December 10. But none of the workers is ready to bank on the management now and wants the government to cancel the lease and hand over the garden to a new entrepreneur who is serious about running the plantation. We have decided not to participate in the meeting,” said Goldar.

The relay hunger-strike will continue till Tuesday and if the government does not come up with any decision, the workers will start a “fast-unto-death” from the following day.

Labour department officials said they had convened a number of meetings to discuss the estate’s reopening but no representative of the management was present during most of the discussions. “Our efforts to reopen the garden suffered a setback because of the management officials’ absence,” said Arthur Horo, the assistant labour commissioner in Malbazar.

At present, each jobless worker gets a monthly financial assistance of Rs 1,500 and food grains from the state government, he said.

Amritangshu Chakraborty, the principal advisor to the Indian Tea Planters’ Association, said: “A meeting will be held next month. We are hopeful that the issue can be resolved through talks. At this point, the workers and trade unions should cooperate with the management.”