One-way for faster movement of vehicles 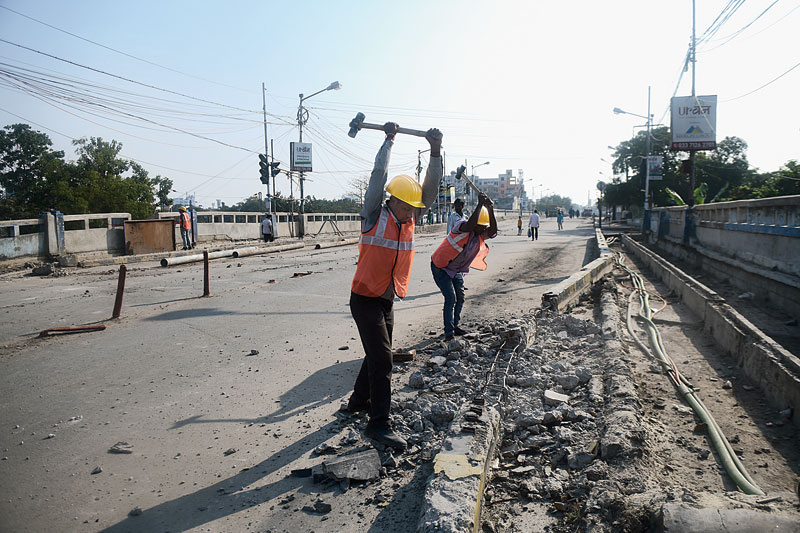 Tallah: Police on Monday afternoon changed the diversion plan it had announced for the Tallah bridge shutdown and imposed one-way rule on Cossipore Road (towards Central Avenue) for faster movement of city-bound vehicles.

The one-way movement will be in force throughout the day and all Cossipore Road-bound vehicles will be diverted on the Lockgate flyover, the police said.

The decision to do away with the initial plan of two-way traffic movement on Cossipore Road was taken as the day progressed. Monday was the first full working day after the Tallah bridge was closed for demolition on January 31 midnight.

The move will ensure reduced wait time for vehicles as the narrow Cossipore Road will have only one-way traffic and all BT Road-bound vehicles move through the Lockgate flyover.

The results were visible within minutes of implementing the decision in the afternoon. The travel time of more than 40 minutes from Chiria More to the Chitpore bridge came down to nearly 30 minutes. Even the waiting time on the Chitpore bridge for vehicles to take the Lockgate flyover came down.

The queue of vehicles at Chiria More in the north and on Girish Avenue in the south was shortened.

Before the Tallah bridge shutdown, the police had decided on two-way traffic along Cossipore Road. It was decided that buses, minibuses and small vehicles would be allowed to move from Girish Avenue and the Chitpore bridge towards Chiria More down Cossipore Road.

Monday began with vehicles headed for the Lockgate flyover moving at snail’s pace down Girish Avenue. The waiting time to cross the Chitpore bridge resulted in long snarls. At the northern end, vehicles turning right from Chiria More to move towards Cossipore Road struggled to move during the morning rush hour.

Around noon, a team of senior police officers who had been assessing the traffic flow on the various diverted routes since morning realised some changes were required.

The first was to stop two-way movement on Cossipore Road, dotted with warehouses and truck terminals.

“After the change, we found it became easier to drain out vehicles from Cossipore Road towards Central Avenue,” Santosh Pandey, joint commissioner of police, said. “It also helped utilise the entire width of the road for vehicular movement.”

Immediately after the decision was taken, cops near the approach to the Lockgate flyover were found struggling to divert vehicles down the flyover. Some officers had to stand in front of vehicles coming from Central Avenue and Girish Avenue to stop them from heading towards Cossipore Road. The vehicles were then diverted towards the Lockgate flyover.

“There are no signage, no banners. Just as you are about to move straight from Girish Avenue you realise Cossipore Road is no longer two-way,” Sunil Kumar Agarwal, a resident of Cossipore Road, said.

The police said many were inconvenienced and that announcements regarding the change would be displayed on banners and boards soon.

Besides changing the traffic flow, the police brass in Lalbazar on Monday tweaked the timings of traffic signals at Bagbazar, Paikpara and Chiria More so that more traffic could head towards Shyambazar or Central Avenue from BT Road during the morning rush hour. The pattern was reversed during the evening.

“The 120-second cycle at the signals are being changed to ensure more Calcutta-bound vehicles can move out of BT Road. The crossings have been chosen based on the vehicular load,” an officer said.