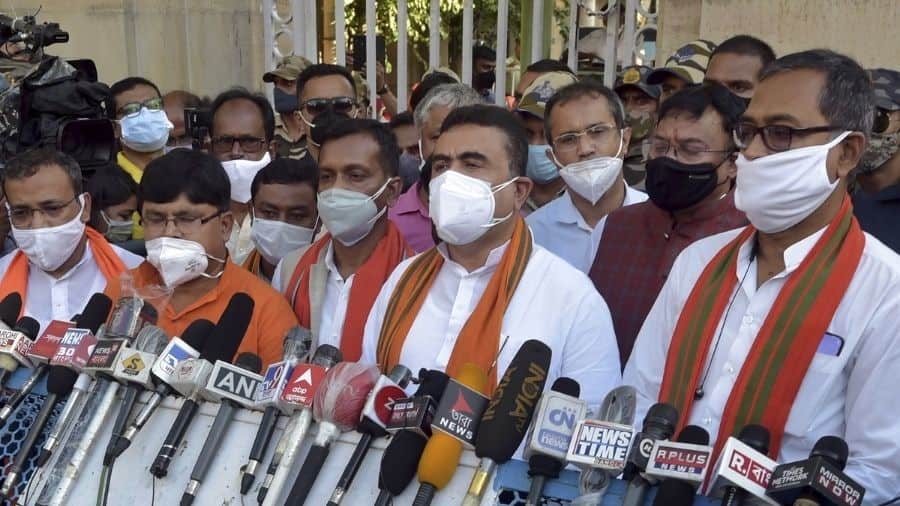 Leader of Opposition in Bengal Assembly Suvendu Adhikari on Tuesday met Governor Jagdeep Dhankhar seeking his intervention in MLA Mukul Roy's appointment as the chairman of Public Accounts Committee (PAC), maintaining that norms were not followed.

Adhikari stated that Roy, who switched over to the ruling TMC after winning the assembly polls on a BJP ticket, should no longer be considered a member of the saffron camp, and his elevation as PAC chairman defies the well-established norm of appointing an Opposition leader to the post.

Claiming that the TMC wants to be its own judge, Adhikari alleged that the ruling party has ensured that its member gets chosen as the chief of PAC a panel that keeps a tab on government expenses to hide "questionable" pursuits.

"We met the governor and sought his intervention as he is the custodian of the Constitution," Adhikari, who led a delegation of BJP MLAs to Raj Bhavan, told reporters.

Earlier in the day, eight BJP MLAs resigned as heads of Assembly panels in protest against Roy's appointment.

The leader of opposition further said that his party wishes to meet President Ram Nath Kovind and Lok Sabha Speaker Om Birla and submit memoranda "describing how democracy is being throttled by the TMC in West Bengal with post-poll violence and unfair practices in the assembly".

He pointed out that Roy's name did not figure in the list of six MLAs given by the BJP for the PAC chairman's post.

The BJP had been seeking disqualification of Roy as a legislator under the anti-defection law, arguing that he changes sides after his election to the assembly.

Adhikari said that the hearing of the BJP's application for Roy's disqualification is scheduled to be held before the Speaker on July 16.

Claiming that the by-polls should not be conducted in the state until the process of vaccination is over, the BJP leader said the TMC, however, is "worried" as Mamata needs to get elected to the Assembly to retain the CM's chair.

Adhikari defeated Mamata in Nandigram by 1,956 votes, according to the Election Commission.

Mamata has moved a petition before the Calcutta High Court challenging Adhikari's win.