Suvendu Adhikari takes a dig at Mamata Banerjee's UP campaign

About three hours later, he posted another tweet taking a dig at Didi in which he advised her to fasten her seatbelts, because 'the storm is going to reach Bengal' 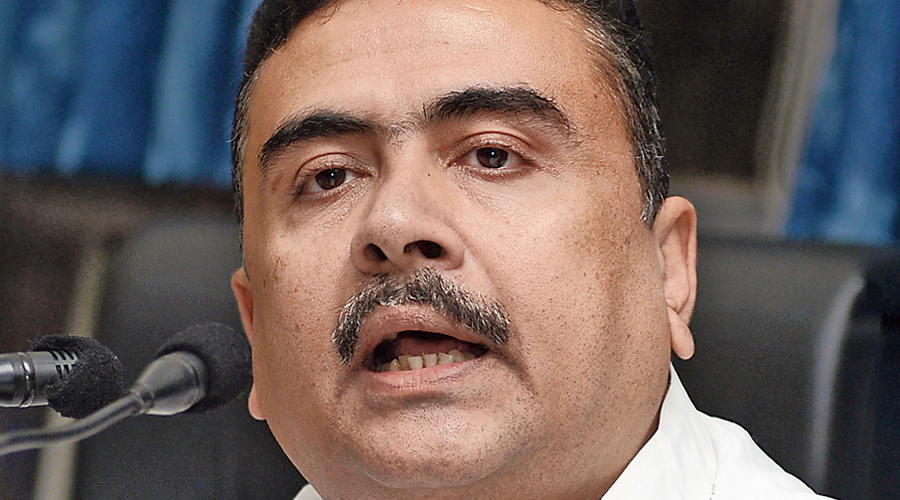 BJP leaders said its victory in four states on Thursday would rejuvenate the party in Bengal and prepare it for next year’s panchayat polls and the 2024 general elections.

The fact that Thursday’s celebratory atmosphere was a rare visual relief — first time since the 2019 Lok Sabha elections when the party bagged 18 out of 42 seats in Bengal — in the BJP camp was admitted even by state party chief Sukanta Majumdar.

“After a long time, there is an air of celebration outside the BJP office,” Majumdar said as he joined a group of party leaders and workers distributing sweets, dancing to drums and playing with saffron colours.

Sukanta Majumdar (centre) being offered a sweet in Calcutta on Thursday.
Telegraph photo

The saffron camp’s performance elsewhere in the country, Majumdar said, will rejuvenate the party in the state. “Since the win has been grand and beyond expectations in many places, it will have a positive impact on Bengal and our workers and supporters here,” the Balurghat MP said.

Soon after it became clear that the trends were in favour of the BJP in four of the five states whose results were out on Thursday, supporters began gathering in front of the party’s Bengal headquarters on 6 Muralidhar Sen Lane, in Calcutta. The celebrations grew in size in the later half of the day and traffic was affected on Central Avenue.

Opposition leader Suvendu Adhikari took to twitter to congratulate the national leaders of his party and Yogi Adityanath on the victory. “Victory of development, patriotism, good governance, law and order and welfare initiatives. Victory of inclusive Hindutva,” Adhikari wrote.

About three hours later, he posted another tweet taking a dig at chief minister Mamata Banerjee in which he advised her to fasten her seatbelts, because “the storm of UP is going to reach Bengal”.

“Other Opposition leaders were saved from repeating Akhileshji’s mistake. Had you not been to UP, the SP probably could have got some more votes. You punctured the cycle,” Adhikari wrote in his tweet. He shared a video of Mamata’s speech during a public rally in Varanasi where she campaigned for Akhilesh Yadava and the Samajwadi Party.

Majumdar said with the AAP wrestling power in Punjab and Trinamul failing to make a mark in Goa, AAP’s national convenor and Delhi chief minister Arvind Kejriwal might rightfully claim as the prime minister aspirant of Opposition parties. “The Opposition will have to decide why not Kejriwal instead of Mamata, since he is politically more successful,” he said and added the BJP’s prime ministerial candidate would clearly be Narendra Modi.

While the Bengal BJP leadership tried to weave a narrative out of the party’s win in four other states, several functionaries questioned the logic behind such a bid. Multiple office-bearers and many dissidents alleged that the leadership was trying to hide its organisational inabilities in Bengal in the garb of celebrations.

“How does UP’s win matter in Bengal? They think this will bring back our supporters? Are these leaders fools?” asked a state BJP functionary who didn’t want to be named.

“It is true that we have a considerably larger presence across the nation right now as we had in 1999. Still, it is foolish to think that the results of 2022 will affect Bengal... We have to face panchayat polls next year and the fact is that we are not prepared,” this person added.