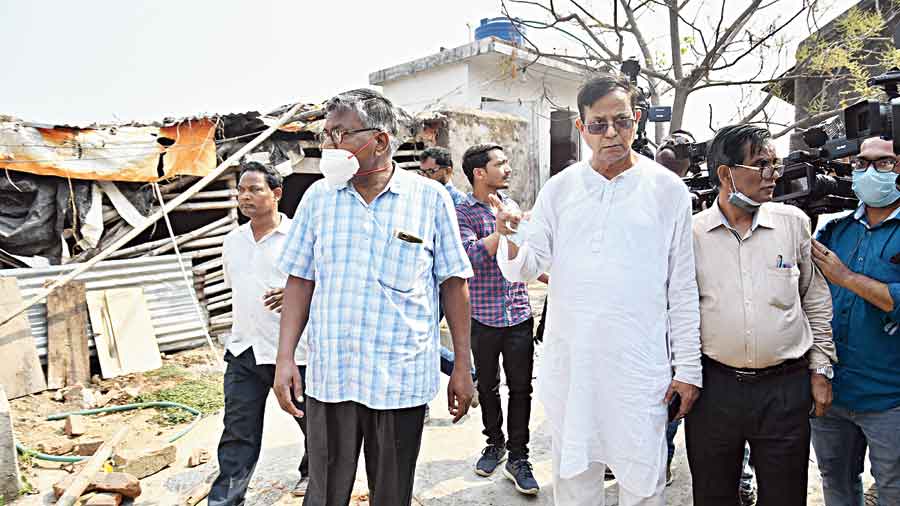 Opposition leaders  made it clear on Wednesday that they would step up the heat on the ruling party over the Bogtui massacre.

An AC bus with 45 BJP MLAs stopped on the way to taste Shaktigarh’s famed lyangchas (a sweet), but their leader of the Opposition in the Assembly Suvendu Adhikari, who came to Bogtui from campaigning in Asansol, demanded NIA or CBI probe into the carnage and slammed chief minister Mamata Banerjee.

A Left Front delegation, including Salim and Biman Bose, left for Rampurhat on Tuesday night.

Sources said Salim opted for a bike ride to Bogtui to thwart any bid by police to stop him. Salim said the horrific killings had their roots in Trinamul’s feud over share of money made through illegal sand and stone mining. “The local Trinamul leader, the SP, SDPO, everyone has a share,” Salim said, and added local MLA Asish Banerjee’s nephew was part of it.

In front of the three-storey house of deceased Trinamul leader Bhadu Sheikh, whose Monday murder is believed to have triggered the massacre, he said: “This is how these people create their kingdoms in villages and helpless people are burnt to death in huts.”

BJP MLA Suvendu later in the day joined his party’s  MLAs along with MPs Arjun Singh and Jyotirmoy Singh Mahato. But when the BJP team reached Bogtui, the site of the crime was cordoned off.

“She will come to tamper with evidence,” he said, demanding a CBI and NIA probe into the killings.

Trinamul MP Sudip Banerjee, however, claimed in Lok Sabha on Wednesday the incident in Bogtui wasn’t political and Trinamul MPs sought an appointment with President Ram Nath Kovind to apprise him of the situation.

The BJP MLAs’ act of enjoying lyangchas on the way was ridiculed by chief minister Mamata Banerjee later in the day. “Some parties are going there while eating lyangcha,” Mamata said at a government event.