Our teams are there with tranquillisers to capture the big cat: Official 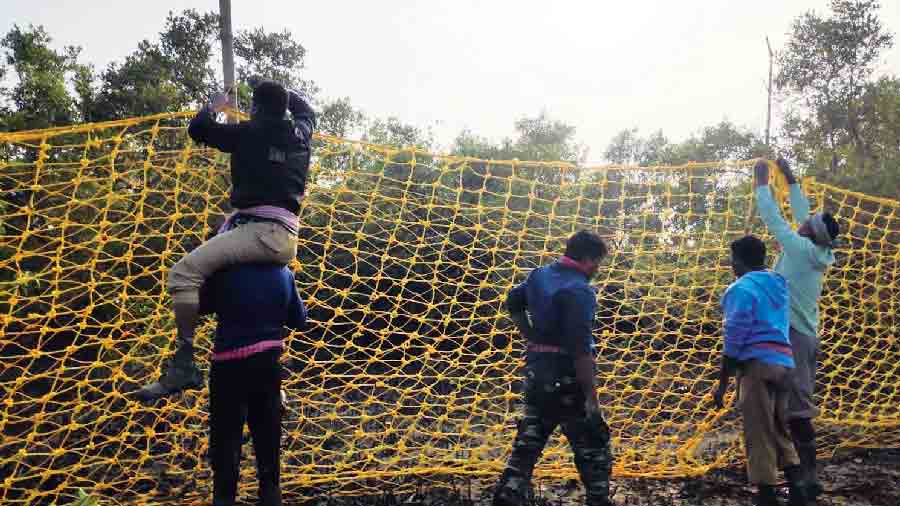 Foresters in the Sunderbans Tiger Reserve on Saturday set up a recorded audio clip of a tigress’s roars over speakerphones in an earmarked area around Gosaba village in their effort to trap a tiger that entered the area late on Thursday.

Jones Justin, deputy field director of the STR, said they were playing the roars of the tigress. The “unorthodox tactic” came about as usual ones of using live goats as baits near where the tiger is believed to be failed repeatedly, foresters said.

“It is mating time and tigers can well be attracted by the roars of a tigress. Our teams are there with tranquillisers to capture the big cat. We have kept open the option to drive it away and so have placed four goats on the riverside,” added a senior forest official in the STR

The tiger reportedly first entered Chargheri village of Satjelia island in Gosaba on Thursday night and foresters installed nets to protect the human habitat from an attack. However, early on Saturday morning, a villager found a pugmark near Mitrabari village of the island, 2.5km away from the tiger’s last known position.

Foresters said as soon as the tiger’s new location was found, they shifted their team and netted the new area.

Partha Haldar, 45, a forester on duty, was suddenly attacked by the tiger and suffered minor injuries.

“He received minor injuries but it helped us gauge the animal’s aggression. The forester is better now after treatment and has resumed duty,” said a forester.

Another tiger was reportedly traced by a group of villagers in Kumirmari village in Gosaba on Saturday evening. It has been tranquillised, Justin said.

One of the two fishermen critically injured on Friday night near Kultali by a royal Bengal tiger in Haldibari jungles from a boat on the Bidyadhari river, succumbed at a Calcutta hospital on Saturday night.

The tiger had jumped on the fishing boat on which the duo were coasting ashore at the time. The alleged maneater reportedly first tried to drag one of the fishermen inside the jungle, but Amal Dandapat, 50, and Khokon Munda, 45, despite their critical injuries fought the animal.

The two injured fishermen, who are residents of Saktir More of Maipith coastal area, returned to Kultali during the early hours of Saturday morning after which local residents informed police and forest officials who took them to the nearby hospital.

As their condition turned critical, they were later shifted to a Calcutta hospital, where Amal died on Saturday night.

“We were moving slowly along the bank of the Bidyadhari river while using fishing hand-traps. When we reached the Rangmari Char, the tiger all of a sudden jumped on the boat. We tried our best to resist it. But it first tried to drag me. Both of us  hit it with the hull of the boat. By then, the tiger was also desperate and it severely injured Amal.” Khokon, the survivor, said.