In memory of Sunanda Patnaik

'Nowhere in the world are listeners as sensitive as Bengalis are', she had said 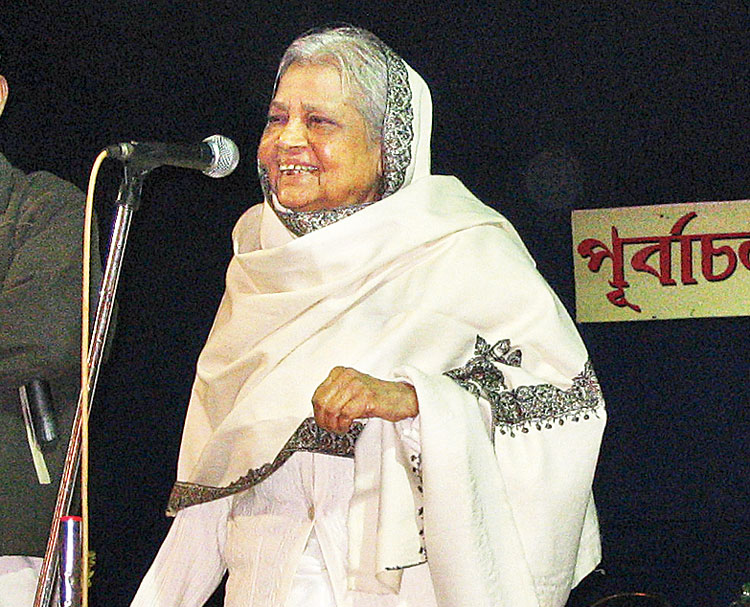 From the album: Sunanda Patnaik addresses the gathering at the opening of an earlier edition of Purbachal Utsav
Telegraph file picture
Sudeshna Banerjee   |   Published 23.01.20, 10:06 PM

The township lost one of its most illustrious residents with the passing of Sunanda Patnaik early on Sunday. She was 85.

A grande dame of Hindusthani classical music, belonging to the Gwalior gharana, Patnaik had made Purbachal her home since 1983 where she stayed alone.

Daughter of Odia poet Baikunthanath Patnaik, she had started her career in singing at the All India Radio, Cuttack in 1948 at the age of 14. She had recounted to The Telegraph in an interview taken in 2012 how she, “the wildest of 10 siblings”, had escaped home, clad in shirt and trousers, and appeared for the audition when she was noticed waiting even after all the registered singers had left. No one had believed she had cleared the audition before the contract letter reached two months later.

The turning point in her career was her performance at the All India Sadrang Sangeet Sammelan in September 1957 in Calcutta. Despite veteran accompanists refusing to take the stage with her, the young Patnaik put up such a performance that the audience forced the organisers to let her perform twice more in the next two days. She had recalled in that interview: “I was gifted 13 gold medals, which was how people expressed their appreciation for singers at such festivals. I pleaded that I would rather have cash to help my large family. So I went back with a lot of love, respect and Rs 1,370. Gold was Rs 100 per bhori in those days.”

Subsequently she decided to settle in Bengal as she kept getting invitations for concerts here. “Nowhere in the world are listeners as sensitive as Bengalis are,” she would always say.

So respectful was she of the Bengali ethos and culture that she would be deeply disturbed at any aberration. The lashing of her fearless tongue is also something that residents would remember. Once a regular at the inauguration of Purbachal Utsav, she would declaim on stage at length on all-round decadence and degeneration in society.

She was never one to mince words. This correspondent recalls the agitated call received when Patnaik’s name was announced, without taking her consent, as part of the advisory committee of eminent citizens by the just-elected Trinamul Congress civic board in 2010. “My doors are open to all. I will not align with any political party,” she had stated vehemently. Possibly that is why little recognition came her way in her adopted state.

On a personal level, she was extremely affectionate. “Ashish, ma. Duta mudi kheye jash,” is how this correspondent recalls being invited home by her every time she was spoken to in person or over phone.

She lived a Spartan life, with her tanpura being the most noteworthy object in her living room. Prayers to Lord Sankatmochan and hours of riyaz took up most of her time.

Patnaik was known for her powerful voice. This correspondent had shared an anecdote with her to check its veracity. At a concert, someone was snoozing in the front row when she took stage and launched on her signature high-speed tarana. The man is said to have been so startled that he fell off the seat. “I am engrossed when I sing. It might be true. I don’t know,” she had said.

Her adulation for Netaji Subhas Chandra Bose knew no bounds. She had recalled setting off with a chauffeured car in search of the place where the Indian National Army had fought so valiantly against the British in Manipur. But hours went by as the driver lost his way in the forested area and with the sun set to disappear, she started praying to Netaji to rescue her from the plight. As if on cue, a stranger appeared amid the uninhabited forest and showed them the way. “It must have been the spirit of Netaji that had appeared to rescue me that day,” she had said sombrely.

She trained students till her health permitted at home, which she called Vishnu Vinayak Sangeet Ashram, after her guru Pandit Vinayak Rao Pattavardhan, under whom she had trained for her Masters at a music school in Pune.

While her musical abilities are known, not many are aware that she wrote poems too. She would fill up bound volumes with hand-written poems in her mother-tongue Odia. She had shown a couple of such volumes to this correspondent and recited a poem, simultaneously translating it. One had to leave soon after to attend a call of duty elsewhere that evening.

On being told that her poetry was poignant and powerful, her face had lit up. “Come back another day. I will show you more,” she had said. Not taking up that offer while there was time will remain an abiding regret.

Did you know Sunanda Patnaik?