'The Trinamul Congress is using the people of a certain community to attack Hindus in Bengal,' he said in his first address as the state party president 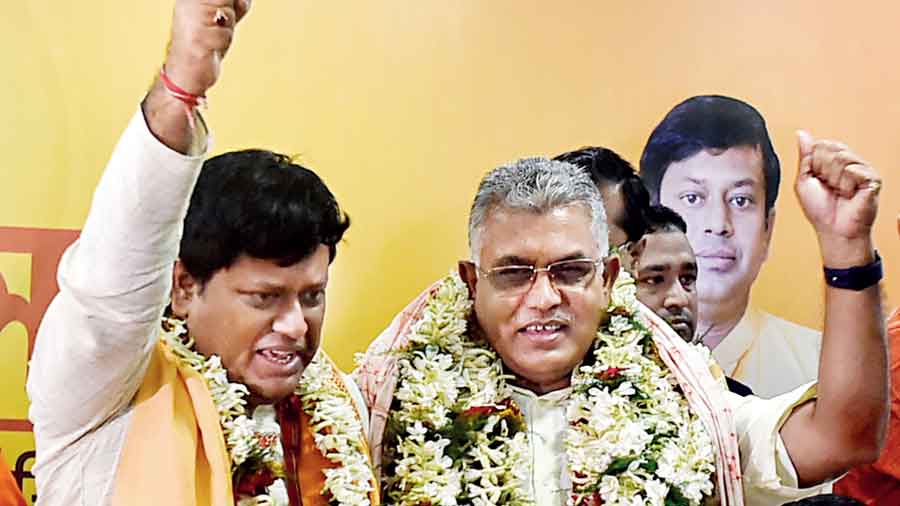 Sukanta Majumdar took charge as the Bengal BJP president in Calcutta on Tuesday with a clear hint of the party’s continuance with divisive politics even as a section of leaders expressed doubts over the Balurghat MP’s ability to steer the organisation by addressing the challenges facing it.

“The Trinamul Congress is using the people of a certain community to attack Hindus in Bengal,” Majumdar said in his first address as the state BJP president.

Majumdar, a PhD in botany, had replaced Dilip Ghosh as the state BJP chief on Monday.

“Our new president is an educated man. But it is doubtful whether he will be able to solve the problems,” a state BJP functionary said.

According to several BJP insiders, Majumdar’s biggest handicap is his little or no connection with the party’s organisation as the MP had mostly concentrated on his own parliamentary constituency in the past two years and hence, had little exposure beyond Balurghat.

“The only organisational experience he has had since his election as an MP was after November last year when he was appointed as the in-charge for the party’s Sikkim unit. Apart from that, he used to look after our national president J.P. Nadda’s Bengal itinerary ahead of the Assembly polls. Lately, he was appointed as the party’s co-in charge for the upcoming polls in the Jangipur and Samsherganj Assembly segments,” a source said.

Getting acquainted with the party and its functionaries will take time for Majumdar and some insiders asked whether the BJP could afford much time as large-scale defections had begun at all levels in the Bengal BJP.

While comparing the challenges facing Majumdar with those which Ghosh had to handle after coming from the RSS, a source said the Midnapore MP had got a year or so as a general secretary before he was made the party chief in November 2015. “As a result, Dilip-da had regular interactions with workers and hence, already had a first-hand experience of the organisation before he was made the president. Besides, Dilip-da, with his rustic comments, had become a crowd-puller,” said the source.

Majumdar himself admitted the BJP was suffering because of differences in opinion among leaders, but he hoped it would not come in the way of the party’s functioning. “Our party has democracy and hence, people have their own views which they share. There are differences in opinion, but there is no difference in our hearts,” he said.

The BJP insiders remained divided on whether the attempt to pursue the divisive agenda would work for the party in the coming days. “Our attempts at polarising the electorate didn’t work in the Assembly polls.... It remains to be seen whether it will work in the future,” said a source.

Trinamul didn’t miss an opportunity to take a jibe at Majumdar’s appointment. The party’s spokesperson and MP Saugata Roy said the new BJP chief would take a year to know and understand the demography of Bengal.

On the other hand, Trinamul MP Sukhendu Sekhar Roy said the BJP had made a scapegoat out of Dilip Ghosh by removing him. “Leaders like Amit Shah had made huge claims before the polls. Why didn’t they step down? Why should Ghosh alone take all the responsibility?” Roy asked.