Advertisement
Home / West-bengal / Strength in every morsel of support

Strength in every morsel of support 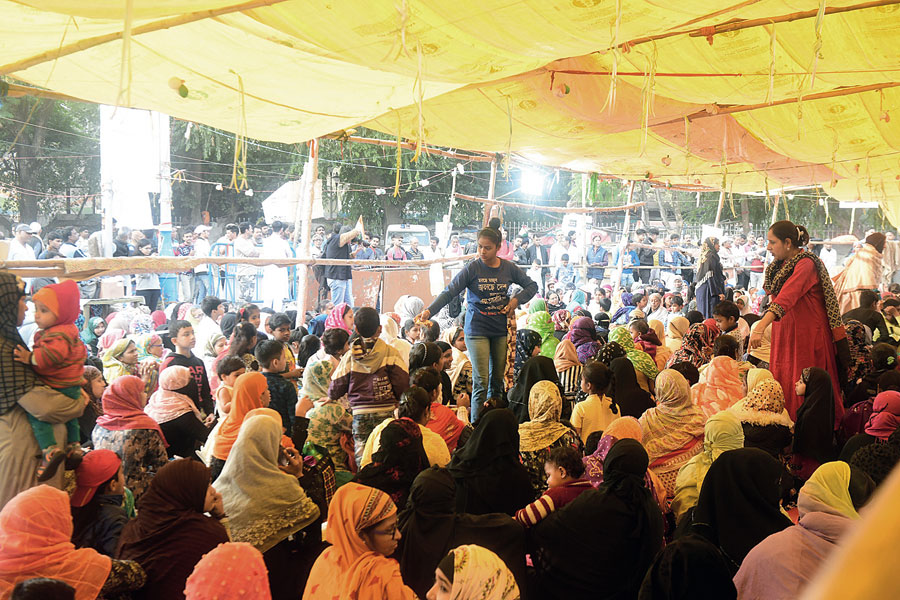 A tiny packet tucked inside a bag to cartons carried on shoulders — people from all walks of life and with varied means have been offering food to the women on 24X7 vigil at Park Circus Maidan against the new citizenship regime.

The servings may, at times, be small but the gesture is always big. It is this show of solidarity that has been giving strength to the women who have been spending the nights in the open for more than a month, sacrificing the comforts of their homes and compromising on household duties.

“Teachers, students and others are coming with food, which gives us more power and makes us think that we are not alone,” said one of the women who has been at the protest venue for several days.

Most well-wishers feel their contribution is much too small. Many didn’t want to be named or photographed.

“It’s a very small contribution. In fact, one feels guilty for not doing enough or not being there enough number of times to stand by these women,” said Beulah Caleb, English teacher at La Martiniere for Girls.

What mattered to Caleb was the sacrifice that each of the women has been making to be part of the protest — be it earning a little less or waking up at odd hours to complete household chores. “We are following our usual routine, going to work and earning a living, but I read in Metro about a woman who has been stitching fewer clothes every day because she has to be at the protest,” she said.

Caleb wanted to do what she teaches in class. “I tell my students about equality and humanity and I feel I should stand by these women in whichever way possible,” she added.

The Park Circus protest has spurred many like Caleb to do “their bit”. An undergraduate student saved from what she earns by teaching children to buy dates and a few bottles of water.

“What I earn takes care of my needs. If I take out a little money from that, it won’t make much of a difference to me,” said the 23-year-old who did not want to be named. “Some of the protesters have been coming from very far in buses and it is not possible for them to carry food for themselves and their children. We don’t expect them to go out and buy food that would sustain them for the long hours on the ground. Some can’t even afford that.”

All the food is stored in a makeshift enclosure on the protest ground, where a person maintains a record. Volunteers distribute the food and water among the protesters. In the evening, a counter is set up to distribute biscuits and glasses of water.

Wasi Akhtar, a volunteer, said an 86-year-old man had dropped in one evening and laid out a piece of cloth that had five packets of biscuits of Rs 5 each. “He was crying. He said he couldn’t afford any thing more but he wanted to give something,” Akhtar said.

Then there are some like Mohammad Riyaz Khan of Tangra, who came with two kilos of oranges. Or Mohammad Iqbal and his neighbours in Tangra, who prepared food one day, packed it and distributed it at the protest venue.

“It is not a lot. But I bring what I can. It’s not that I am doing anything great,” Khan said.

The volunteers on the ground say every contribution over the past month has helped sustain the movement. There are neighbourhood clubs and shops that have been sending cartons of food for the protesters.

“We don’t know the people who are coming here with contributions but at the end of the day we find that the needs of the people are being met,” Akhtar said.

While many feel it is the people who are giving strength to the movement, those coming with their contributions say they draw strength from the women on the ground.

“These women give us strength. Some of them have far less material goods, far less security at work and yet they have given up on comforts because they feel they have to fight to get our unity back and to save our Constitution…. Those still complacently sitting at home should feel ashamed,” Caleb said.