Trinamul leaders called the incident a ‘spontaneous outburst’ of people 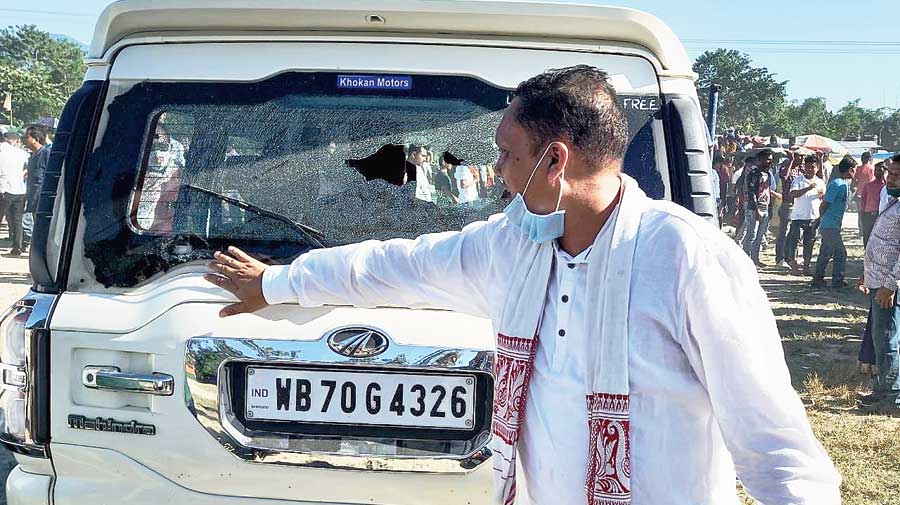 Stones were hurled at SUVs, black flags waved and “Go Back Dilip Ghosh” slogans rent the air as the convoy of the BJP state president moved through Asian Highway 48 and reached Jaigaon, a town  on the India-Bhutan border, on Thursday.

Two cars in Ghosh’s convoy were damaged, prompting the BJP to accuse Trinamul of orchestrating the attack. BJP supporters, led by MP Saumitra Khan, demonstrated in Calcutta, burning an effigy of Mamata Banerjee.

Trinamul leaders denied the charges and called the incident a “spontaneous outburst” of people.

On Thursday, Ghosh who is touring north Bengal, headed for Khoklabusty of Jaigaon for a public meeting.

As his convoy rolled on AH48, some 100 people with black flags and posters saying “Go Back Dilip Ghosh,” assembled at GST More on the way to Jaigaon, shouted slogans and waved black flags. At Jharnabusty, another 6km away, another group started pelting stones at the vehicles. Ghosh’s SUV was hit by pebbles but escaped major damage.

The SUV next to his — that of Kalchini MLA Wilson Champramary — was hit and its windscreen damaged. Flying stones hit another SUV, that of the Alipurduar district president of BJP’s ST Morcha.

Police brought the situation under control.

At the meeting, Ghosh directed his ire at Trinamul.

“When the hills were on fire, (Bimal) Gurung was a criminal and forced to leave the hills. But recently, Gurung is in the good books of Didi because he is supporting Trinamul. This is all Didi’s gameplans and she intends to use Binay (Tamang) in hills and Gurung in the foothills. She is trying to fool the Gorkhas...”

Accusing Trinamul of the attack, he said the party was panicking at the thought of losing to the BJP. Mridul Goswami, Alipurduar district Trinamul chief, called the protests “a spontaneous reaction” of people. “They are fed up with BJP’s hollow promises.”