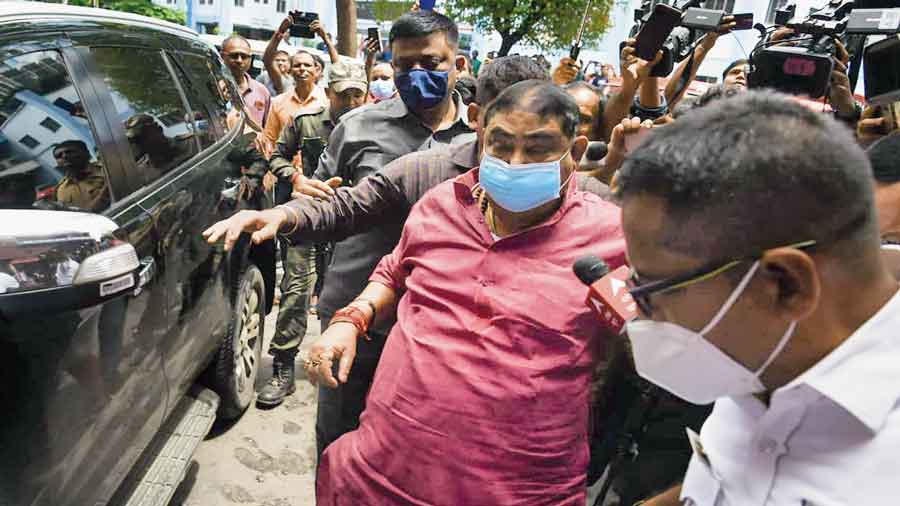 A seven-member team of physicians with the SSKM Hospital here on Monday ruled out the admission of Trinamul Congress’s Birbhum chief Anubrata Mondal to the multi-speciality hospital on a day he was summoned to appear before the CBI in connection with an alleged cattle-smuggling case.

The medical team’s decision, conveyed to the hospital authorities who then took the decision against Mondal’s admission, came 15 days after Calcutta High Court had directed the Enforcement Directorate (ED) to take arrested minister Partha Chatterjee to the All India Institute for Medical Sciences (AIIMS) in Bhubaneswar for a medical examination.

A lower court had allowed him to stay admitted to the SSKM, which was challenged by the central agency. The ED’s counsel had contended that the SSKM was consistently used as a “safe shelter of leaders of the ruling party”.

Mondal had turned up at the state’s premier government-run hospital in the afternoon and arrangements had been made for his admission to the Woodburn Ward, where the heavyweight leader had spent several days earlier. But the medical team — comprising senior doctors of surgery, chest, cardiology, medicine, urology, endocrinology and physical medicine departments — that checked Mondal’s health concluded that his was not a case for admission.

“The patient is suffering from certain chronic ailments. But none of them requires his immediate admission to the hospital. They can be treated with medicine,” said a senior doctor from the medical team.

“We have submitted our report to the administration with our observations.”

In recent years, SSKM has been the subject of downright derision on social media – besides caustic criticism of the Opposition in the state – over its alleged misuse by certain leaders of the ruling Trinamul, who when sought for questioning or taken into custody by a central agency turn to the hospital for admission.

Prior to the high court’s apparent endorsement of the ED’s argument in Chatterjee’s case, the SSKM was seen readily obliging such requests.The July 24 high court order, in the context of Chatterjee and the SSKM, had said: “The investigating agency reasonably apprehends that the accused will exert his political and administrative position and prevail over the doctors to submit a false medical report as to his health condition and safely stay in the said hospital during the period of first 15 days within which he may be remanded in the custody of the investigating agency.”

AIIMS Bhubaneswar had ruled out admission for Chatterjee.On July 25, chief minister Mamata Banerjee had, at a state government event, firmly defended SSKM as “the Number One in the country”, apparently critical of the high court directive.

On Monday, however, sources in the ruling establishment said the refusal by the SSKM could not have come without a nod from her.“This certainly happened with approval of the state’s health minister (Mamata). It, quite obviously, is an attempt to prevent SSKM’s image from getting tarnished further,” said a source in Trinamul.

A section of physicians at SSKM said that the team that is usually formed to check the health of a minister or a political leader from the state has recently decided that it will stay away from such controversies surrounding admission of an accused.

“The hospital is the state’s premier multi-speciality institution and some of the best doctors are posted here. We don’t want anything to tarnish the image or question the competence of our team of doctors,” said a senior doctor with the hospital’s administration.

Shortly after the refusal by the SSKM on Monday, Mondal left in a car — without a red beacon — for his Chinar Park apartment in Newtown. On his way out of the hospital, he was booed as a “chor (thief)” and a “goruchor (cow-thief)” by a few people on the hospital premises, who identified themselves as kin of patients.

“I have told them (the CBI) whether I would be turning up or not,” he said while entering the flat, which he left around a half-hour later, at 4.50pm, for his Bolpur residence.Within an hour of Mondal’s departure, a senior CBI official turned up at the Chinar Park complex and spent around 40 minutes talking to some of the other residents, apparently trying to ascertain when the leader had reached, when he departed, and whether he had indicated the timing of his next visit.Bengal’s major Opposition parties — the BJP, the CPM and the Congress — mocked Mondal and his party following the SSKM’s refusal to admit him.

However, Trinamul said Mondal had every right to do what he did.“Like any other citizen, he has every right to seek examination, treatment, admission in a public hospital, when he feels unwell. That is what he did. The hospital authorities did not think he required admission right away. After that, what he does during the day is his prerogative,” said Jay Prakash Majumdar, a BJP turncoat who is now a Trinamul state vice-president.