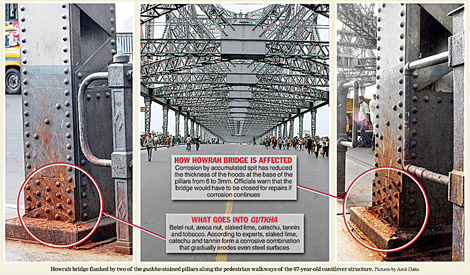 Spit-o-cracy is threatening the safety of Howrah bridge with the daily onslaught of gutkha spat out by pedestrians corroding the protective hoods at the base of its pillars.

Officials of Calcutta Port Trust, the custodian of the 67-year-old bridge that bears the weight of over a lakh vehicles every day, said the commuters’ collective spit power had reduced the thickness of the steel hoods protecting the pillars from six to three millimetre since 2007.

“Gutkha contains highly corrosive elements that erode even steel. A safety audit is now being planned to find out the effect of constant spitting and several other factors on the stability of the hangers that transfer the load of traffic uniformly across the structure,” a senior port trust official told Metro on Sunday.

Forensic sciences expert Biswanath Kahali confirmed that accumulation of gutkha-laced spit on steel would have the same effect that acid has.

“Slaked lime combined with catechu and tannin, which are all components of gutkha, form an organic compound that acts as a corrosive agent on a steel surface. In combination, these substances can gradually corrode a steel structure,” added Kahali.

A port trust official said the base of all 78 hangers had suffered extensive damage over the years with pedestrians passing by treating the bridge as a spittoon. “These hangers help transfer the load of the bridge from the deck to the girders. So any damage to the hangers constitutes a threat to the safety of the bridge,” an official said.

The cantilever structure has been designed in such a way that the load first gets transferred to the girders under the belly of the deck, from where the hangers shift the weight to the overhead structure.

The hangers, positioned across the 1,500-foot bridge, have hoods at the base to prevent water seeping into the junction of the cross-girders and hangers.

The port trust had replaced all the hanger-base covers in 2007 after they were found to have been damaged. “We spent several lakhs on replacing these but 50 per cent of the hoods have been eroded within three years. The 6mm bases are now around 3mm each. If corrosion continues at such a rate, we would need to decommission the bridge for repairs,” warned a port trust official.

An estimated five lakh pedestrians use the bridge every day to cross the river. The most damaged parts of the bases are along the pedestrian walkways of the landmark bridge. “Those on the side of the thoroughfare are not damaged. This proves that pedestrians chewing gutkha and spitting are the culprits,” said an official.

Officers of North Port police station claimed they were routinely imposing fines on pedestrians caught spitting. “However, it is not possible to deploy personnel to prevent spitting on the pillars given our manpower shortage,” said an officer at the police station.

The report of a survey by Rites in 1983 had mentioned how corrosion was the main cause of damage, though gutkha was specifically not mentioned as a threat. According to that report, corrosion was being caused by adverse atmospheric conditions and aggravated by human and vegetable waste.

A fresh study being planned by the port trust would find out the extent of corrosion, assess stress levels, density of traffic and recommend a maintenance procedure.

The port trust is contemplating using new technology to save the bridge but that could take time. “We are looking at the possibility of using non-metallic covers as hanger hoods to prevent corrosion,” said an official.

Metro had recently reported how rash driving was causing damage to the cantilever structure despite high-tech surveillance through remote-controlled cameras.

How can Howrah bridge be saved from gutkha spit? Tell ttmetro@abpmail.com