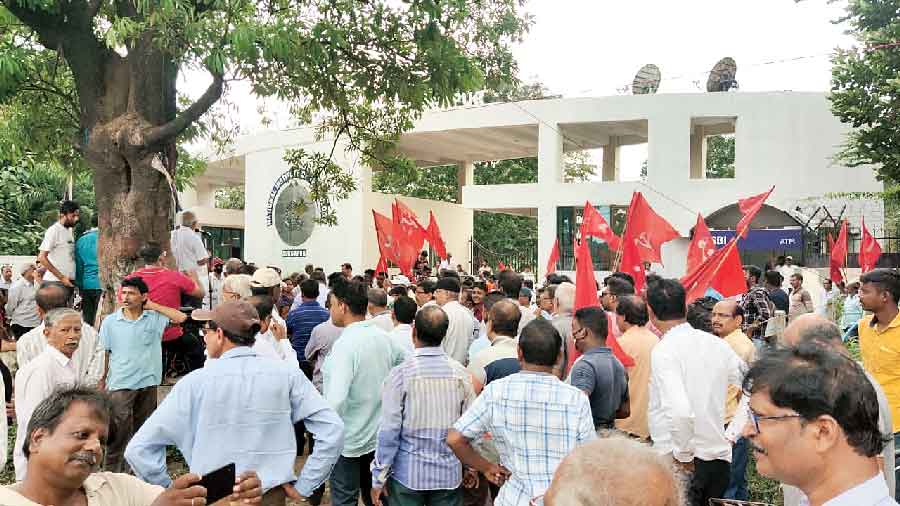 CPM supporters demonstrated in front of the CBI’s temporary camp office in Durgapur on Friday demanding the arrest of “main culprits” in coal and cattle smuggling cases.

CPM leaders alleged that the central investigating agency, which had recently filed its first chargesheet in the coal smuggling case against 41 persons at its special court in Asansol, was “deliberately” hiding the prime accused in the cases because of a “nexus” between the Trinamul Congress and the BJP.

“The CBI filed its first chargesheet in the coal smuggling case against 41 persons almost two years after the agency had started the probe but surprisingly, didn’t mention the names of the kingpins who are all from the ruling party. Everyone knows who were behind coal and cattle smuggling but the CBI didn’t include their names in the chargesheet. It is because of the deal between Trinamul and the BJP,” said CPM West Burdwan district secretary Gauranga Chatterjee.

Accusing Trinamul of a “secret understanding” with the BJP, a CPM leader pointed to Bengal’s ruling party’s decision to abstain from voting in the vice-presidential elections.

“The BJP is using the CBI for its political interest. The CBI excluded the names of Trinamul top leaders in the smuggling cases and in return, Mamata Banerjee’s party decided to abstain from the voting of vice-presidential election to help the BJP. They (Trinamul) are working as a dummy Opposition of the BJP to help the saffron brigade in every election,” said Pankaj Roy Sarkar, a CPM district secretariat member.

CPM workers also held a rally before staging the demonstration in front of the National Institute of Technology (NIT) campus, where the CBI has set up its temporary camp office. A large police force was deployed outside the NIT gate.

“The movement will continue until the CBI arrests the prime accused in the smuggling cases. The CBI is investigating the case under the direct supervision of the court and if required, we will also move the court,” said Roy Sarkar.

The CBI has been probing the multi-crore coal scam since November 2019 and names of several Trinamul Congress leaders and senior police officers cropped up in the case.

The ED had already interrogated Trinamul MP Abhishek Banerjee, his wife Rujira Narula and some police officers in the coal smuggling case.

Reacting to the CPM charge, a Trinamul leader said: “A raid by the Enforcement Directorate on minister Partha Chatterjee’s house shows that central agencies are after Trinamul. CPM allegations are absurd.”

The special court of the CBI sent Saigal Hossain arrested for allegedly possessing unaccounted wealth and his involvement in the cattle smuggling case in judicial custody till August 5. Saigal, one of the security guards of Trinamul Birbhum chief Anubrata Mandal, was arrested by the CBI on June 9. He was initially remanded in a weeklong CBI custody but after that he was sent to judicial custody.