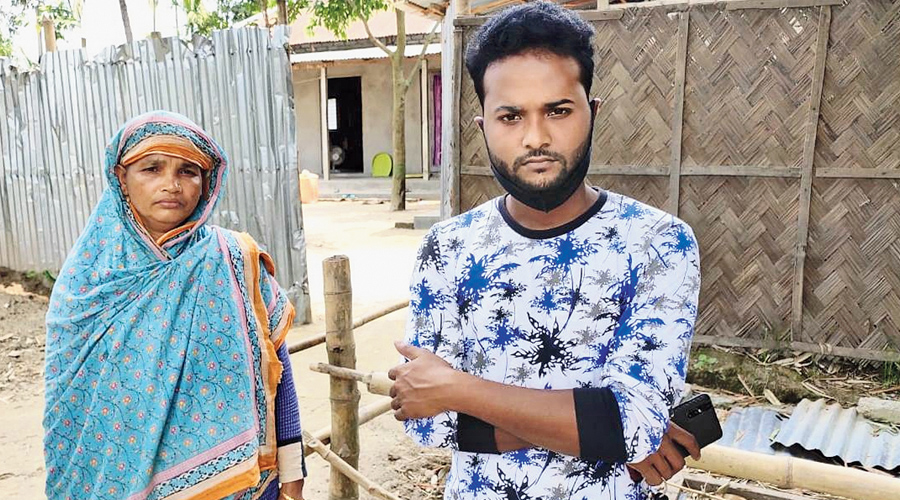 Pinku Rehman and Mamata Bibi, the brother and mother of Maniruzzaman Mian (one of the four youths who had fallen to CISF bullets), at Jorpatki village on Monday.
Picture by Main Uddin Chisti
Our Correspondent   |   Cooch Behar   |   Published 18.05.21, 01:17 AM

A four-member team of the Criminal Investigation Department reached Jorpatki village in the Sitalkuchi Assembly segment of Cooch Behar district on Monday to probe into the firing that had claimed four lives on April 10.

Accompanied by senior police officers, the CID team led by Kalyan Mukhopadhyay, the deputy inspector general (special), spoke to villagers to obtain information about the incident.

The firing had taken place on the premises of Amtali MSK (booth number 5/126) at Jorpatki village.

On Monday, the CID sleuths engaged officers of the land and land reforms department to measure the premises of the booth. The investigators asked four local people to reach Mathabhanga police station where their statements were recorded.

Mukhopadhyay was brief in his reaction. “We have come here to collect information about the April 10 firing. The probe is in progress and unless we finish it, we cannot make any comment on the incident.”

The visit of the CID’s special team kindled hope among the families of the deceased youths.

Rahila Khatun, wife of Maniruzzaman Mian — one of the victims — expressed confidence in the chief minister.

“Mamata Banerjee stood by us after the incident. She also announced jobs for one member of each victim’s families. We have full confidence that her government will find out the truth and justice will be delivered,” said Rahila.

Anjupa Khatun, the elder sister of Samiul Haque who had also lost his life while he was standing in a queue at the booth, said the visit of the CID officers had bolstered their confidence.

“We believe the investigation is going on in the right track and those who had fired at my brother and others will be punished,” she said.