Originally found only in the vicinity of Shingba Rhododendron Sanctuary above Lachung, rhododendron niveum flowers have bloomed at Kyongnosla after decades of efforts of the forest dept 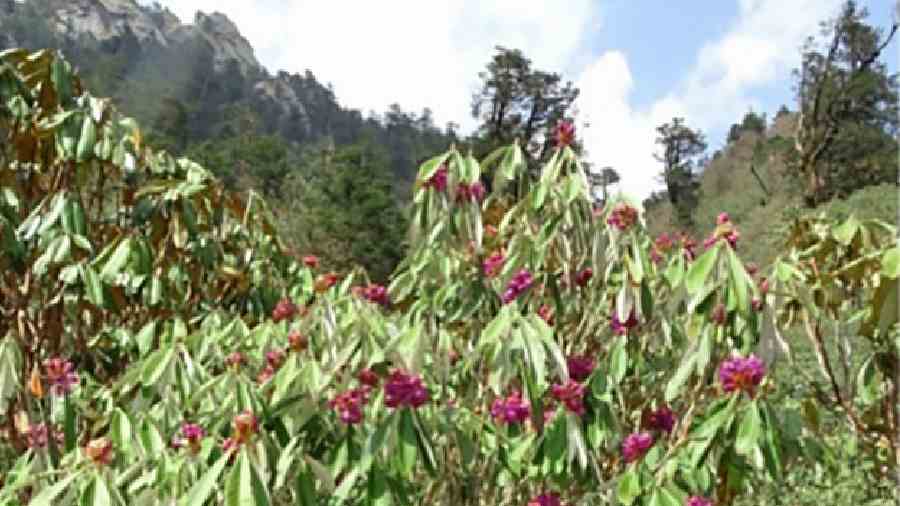 Rhododendron niveum is a small tree that grows up to a height of six metres. It has unique smoky blue or purple-mauve flowers and is snow-white in colour in the lower parts of the leaves. “The name of the niveum species of rhododendron is derived from the Latin word “niveus” meaning snowy or snow white,” the release said.

In view of the growing biotic pressure on its north Sikkim location, for the past two decades, the forest department had been constantly working towards creating a second home, for which multi-location trials had been carried out. “Amongst all these experimental plots, the plants transplanted in the Kyongnosla Alpine Sanctuary have been successfully established and are now blooming,” said the release.

The department said a survey conducted by the Sikkim Himalayan Regional Centre of the Botanical Survey of India had found the plants in Kyongnosla to be doing well and recommended that the site could be supplemented to create a second home for the state tree.“Now, in the coming months, this initiative will be scaled upto develop a second population of the state tree in Kyongnosla, Gangtok district,” it added.

The release further said with accelerating biotic, climatic and environmental changes, it was imperative to create alternate homes and rescue rare, endangered and threatened species as an adaptation measure to secure their long-term survival.