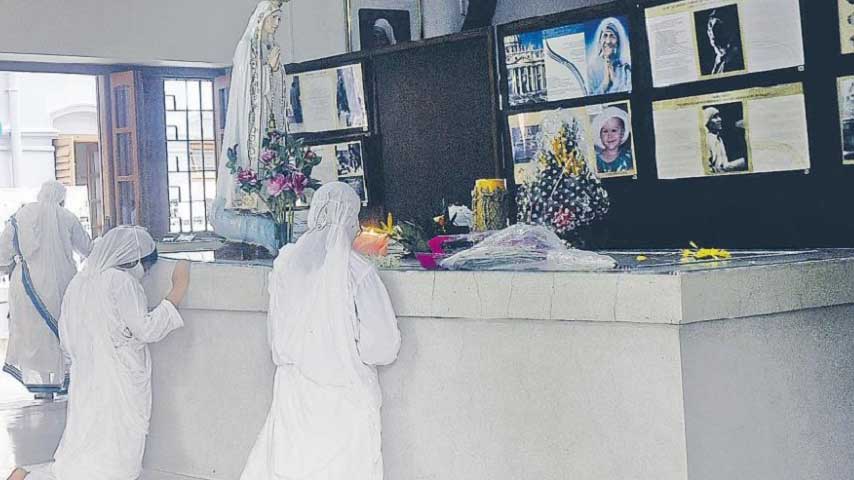 The Union Home ministry has said that it did not freeze any accounts of Missionaries of Charity but that the Mother Tersesa founded charity had itself sent a request to State Bank of India to freeze its accounts, its statement  issued on Monday evening after the Bengal chief minister and the state CPM tweeted that such a freeze had deprived over 20,000 patients and staff of food and medicines.

The home ministry also said that the Missionaries of Charity's renewal application under the Foreign Contribution (Regulation) Act, 2010, was declined for not meeting the eligibility conditions under the law and the foreign contribution regulation rules.

The registration of Missionaries of Charity is valid till December 31, 2021.

Soon after, the Missionaries of Charity came out with a  statement. Sr. M Prema, Superior General of MOC, said, "We would like to clarify that the FCRA registration of the Missionaries of Charity has been neither suspended nor cancelled. Further there is no freeze ordered by the Ministry of Home Affairs on any of our bank accounts. We have been informed that our FCRA renewal application has not been approved. Therefore, as a measure to ensure there is no lapse, we have asked our centres not to operate any of the FC accounts until the matter is resolved."

“Yesterday, Christmas Day the Union Ministry FROZE ALL BANK ACCOUNTS of Mother Teresa’s Missionaries of Charity. The Govt has frozen all the accounts in India, including cash in hand. Their 22,000 patients, including employees, are left without food and medicines,” tweeted CPM state secretary Surjya Kanta Mishra.

Yesterday,Christmas Day the Union Ministry FROZE ALL BANK ACCOUNTS of Mother Teresa’s Missionaries of Charity. The Govt has frozen all the accounts in India, including cash in hand. Their 22,000 patients, including employees, are left without food and medicines.

Fifteen minutes later chief minister Mamata Banerjee tweeted, “Shocked to hear that on Christmas, Union Ministry FROZE ALL BANK ACCOUNTS of Mother Teresa’s Missionaries of Charity in India! Their 22, 000 patients and employees have been left without food and medicines. While the law is paramount, humanitarian efforts must not be compromised."

Shocked to hear that on Christmas, Union Ministry FROZE ALL BANK ACCOUNTS of Mother Teresa’s Missionaries of Charity in India!

Their 22,000 patients & employees have been left without food & medicines.

While the law is paramount, humanitarian efforts must not be compromised.

Neither the chief minister nor the CPM state secretary provided any other details regarding the action.

But Vicar General, Archdiocese of Calcutta, Fr. Dominic Gomes condemned the government action against the Missionaries of Charity.

"We are appalled by the timing and lack of empathy to consider the humanitarian disaster this decision will cause," he said.

"In freezing the bank accounts of Missionaries of Charity Sisters and Brothers congregations, government agencies have given a cruel Christmas gift to the poorest of the poor.  Besides over 22,000 direct dependants and beneficiaries at their centres across the country, MC Sisters and Brothers reach out to uplift thousands and are often the only friends of the lepers and social outcast no one will even venture near.

"Overlooking the fact MCs of St. Mother Teresa give up all worldly goods, sleep on the floor and earn no money – giving whatever they have in service to the poorest in every corner of the earth, especially our poorest of Indians - this latest attack on the Christian Community and their social outreach is even more a dastardly attack on the poorest of India’s poor, who the MC congregation serves."

About two weeks ago, an FIR was filed against the Missionaries of Charity in Gujarat under the Gujarat Freedom of Religion Act, 2003 for allegedly hurting Hindu sentiments by forceful conversion.

The District Social Defence Officer Mayank Trivedi, who lodged the complaint at Makarpura police station, claimed during a visit accompanied by the Chairperson of the Child Welfare Committee of Vadodara district, had found that girls residing in the home run by the Missionaries of Charity were forced to read the Bible and wear the cross, reported The Indian Express.

“The institution has been involved in activities to hurt the religious sentiments of Hindus intentionally and with bitterness… The girls inside the Home for Girls are being lured to adopt Christianity by making them wear the cross around their neck and also placing the Bible on the table of the storeroom used by the girls, in order to compel them to read the Bible… It is an attempted crime to force religious conversion upon the girls,” the FIR reads, according to the Express report.

It’s not yet clear whether the Union government’s action was a follow-up to the complaint in Prime Minister Narendra Modi’s home state of Gujarat.

The alleged government action comes close in the heels of attacks on churches in different parts of the country. On the day of Christmas, the Holy Redeemer Church in BJP-ruled Haryana’s Ambala, constructed in 1848, was vandalised. A broken statue of Jesus Christ was left on its boundary wall.

Goons allegedly owing allegiance to Hindutva outfits stormed into Christmas services and celebrations at several places including Gurgaon and threatened members of the Christian community including children.

In October 2020, Amnesty India International had announced that it was shutting its operations in India, after the Centre froze the bank accounts of the rights watch body accusing it of violating India’s foreign funding laws for non-governmental organizations.