While four persons, including a five-year-old child, died in collapse of walls, the rest were electrocuted 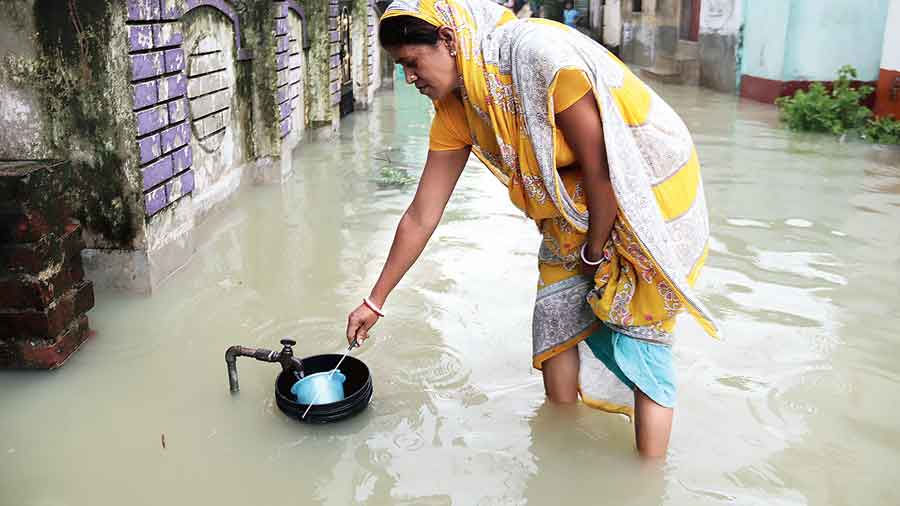 A woman collects water from a tap on a street flooded by the Banka river in Burdwan town on Friday.
Munshi Muklesur Rahaman
Subhasish Chaudhuri   |   Kalyani   |   Published 31.07.21, 12:56 AM

Seven lives were lost across south Bengal as heavy downpour continued on Friday because of a well-marked low pressure that led to water-logging at several places and disruption in normal life, including suspension of railway and road communications.

While four persons, including a five-year-old child, died in collapse of walls, the rest were electrocuted.

Continuous rain caused erosion of railway tracks at Ahiran in Murshidabad district adjacent to NH12 under Azimganj-Malda section. While the railway authorities undertook repairs, routes of some trains were diverted.

In Murshidabad’s Raghunathganj, an elderly man died in a wall collapse. Natu Mondal, 76, was sleeping in his mud house when one of the walls collapsed on him. In a similar incident, Laxmiram Soren, 55, died at Rajnathpur village of Sonamukhi in Bankura on Friday afternoon. Two other persons were injured and later admitted to the Bankura Medical College and Hospital in a critical condition.

In Bankura’s Similipal, Wahid Khan, 65, also died in a mud wall collapse. The victim was sleeping at his home at Pathardoba village. The local residents recovered the body trapped under the wall on Friday morning.

In West Burdwan’s Asansol Nikhil Baski, 5, died when a mud house caved in. Police said the kid and two others were trapped under the debris. They were taken to Asansol district hospital where Nikhil was declared dead.

In Howrah’s Dasnagar, Hemanta Singh, 39, was electrocuted. He was trying to turn down the main switch of his house to avoid the possibility of electrocution after rainwater entered the residence. Some local residents spotted Singh lying and rushed him to Howrah District hospital where he was declared dead.

At Bongaon in North 24-Parganas, a youth and his mother were electrocuted at Tawbazar. Police and local sources said Rishav Adhikari, 26, was first electrocuted when a galvanised iron wire snapped because of heavy wind and got entangled with an electric cable. His mother Mita Adhikari, 49, died while trying to rescue him.

Villagers of Simultala near Basanti in South 24-Parganas blocked the state highway by digging up a trench after the locality went under water because of clogged drains.