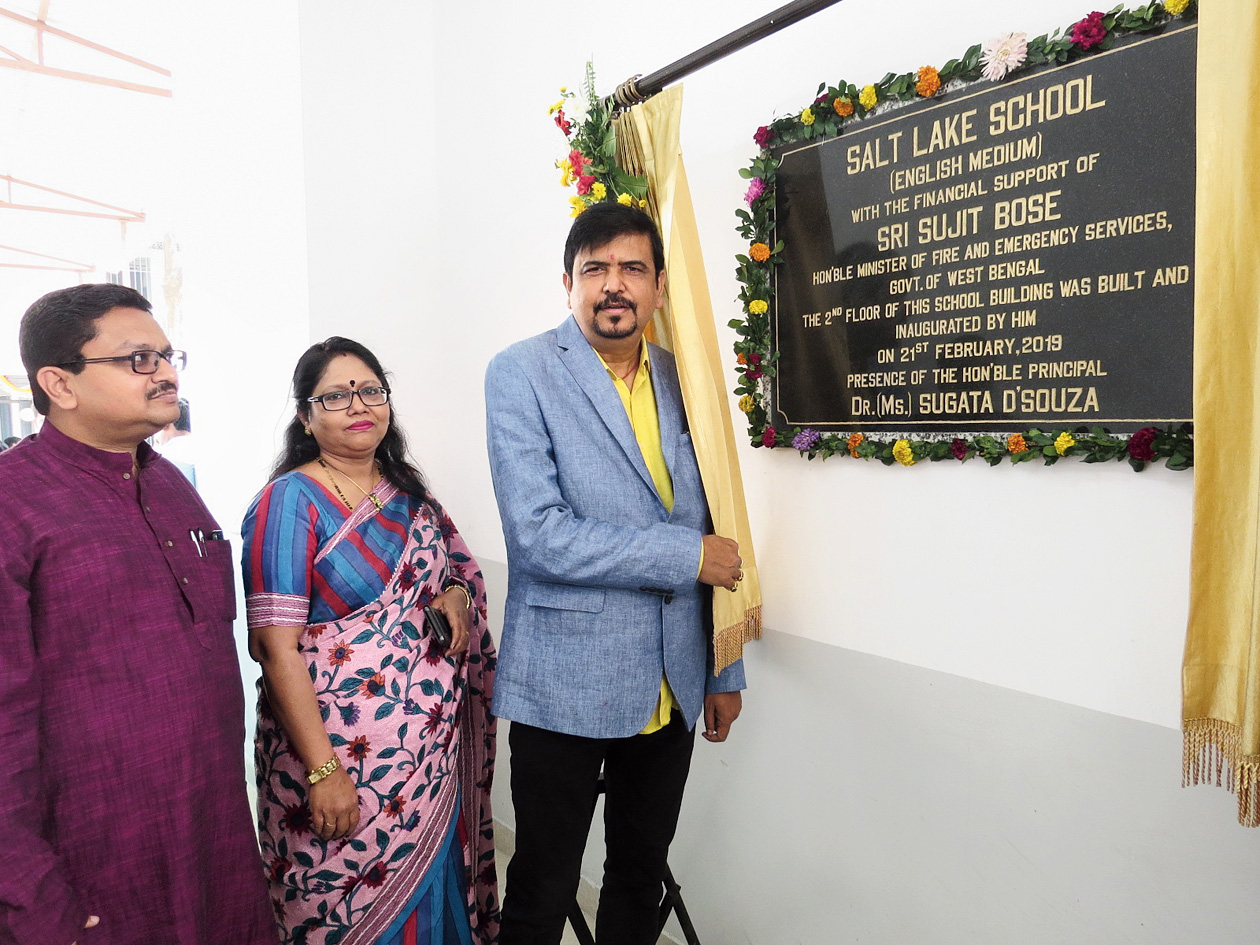 Salt Lake School got another floor to accommodate students, staffers and hold programmes in.

“So long we had to hold the bigger meetings in the basketball court,” she said. About eight years ago, a section was added to the pre-primary class. As the years went by, each class required a section — and a classroom — more. The dearth of space now means Class IV students being packed off a period early, at 11.30am. “Now that we have this new floor, from the session starting in April, they will have classes till 12.15pm.”

Art teacher Subhankar Basu also recalled the kind of problems teachers would run into due to space constraint. “Often our classes would have to be held in the library or even out in the open,” said the teacher who has been with the school for 30 years.

The inauguration was done by local MLA and minister Sujit Bose who is also an ex-officio member of the school’s governing body. “We needed a structural stability certificate for constructing the extra floor. Experts at Jadavpur University were consulted for that. The construction took place according to their advice,” he said.

Taking him on a tour of the newly built premises, the principal requested him for an iron grille along the verandah as a safeguard against accidents. Bose readily agreed. To the delight of assembled teachers, he also announced a grant of Rs 3 lakh for a multi gym at the school.

At the inauguration programme, Bose also promised to put in an effort to untangle the complication that the school’s second campus has run into.

The school had started construction of its second campus in IA Block on plot 22 A in 2009. It was supposed to be a G+5 storeyed building. The project cost at that time had been pegged at Rs 4.8 crore. Anjan Kumar Dutta of A. K. Dutta & Associates, the architect of the project, had put the duration for construction at two years. The school was supposed to have started operations from April 2012 as a joint venture between the school and the erstwhile Bidhannagar Municipality. The 26-cottah plot was to be sub-leased for 50 years on an annual rent and the sub-lease was subject to renewal by the civic body. The school spent Rs 1.1 crore it had raised on the construction. “But when we approached the bank for a loan to fund the rest of the construction, we were refused as the school did not own the land against which the loan was being sought,” said the principal.

The project has remained stuck since then. The school authorities have held multiple meetings with the urban development department, which owns all the land in Salt Lake, but no solution could be found.

In 2017, when the chief minister held a meeting with heads of all the schools in the city, she advised them to write to her department in case they were facing any problems. Accordingly a letter was sent from the school. The chief minister’s office had forwarded the letter to the urban development department on August 25, 2017 with a copy sent to the school as well. But no progress was made in the matter since then.

The incomplete building stands as an eyesore on a corner plot at the entry point of IA Block.

Bose admitted that the problem could be solved by none other than the chief minister. “I will raise the matter with her when I get a chance,” he promised.

The school gets over a 1,000 applications for admission at the pre-primary level every year. “We cannot take in more than 200. If the second campus comes up we can shift the primary section there and accommodate more students,” D’Souza said.