Areas around Sealdah reel from diversions 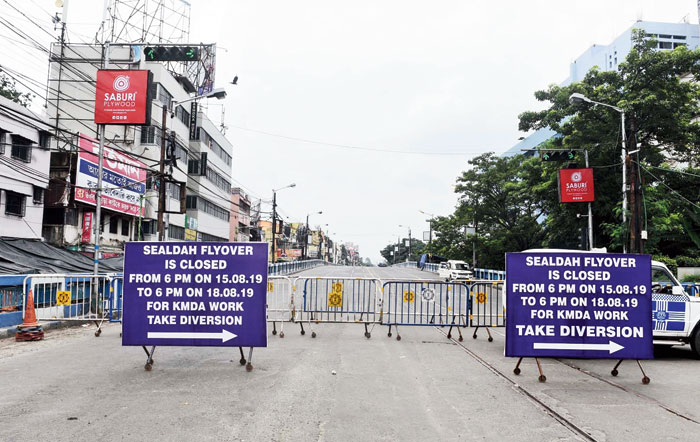 Traffic was thrown out of gear in and around Sealdah on Friday, the only working day in the four-day period when the flyover will remain shut to facilitate its safety audit and load test.

An engineer of the Calcutta Metropolitan Development Authority (CMDA) that maintains the structure said that it would be closed to traffic till 6pm on August 18.

The closure started on Thursday evening when most offices and schools remained shut because of Independence Day.

Hundreds of commuters, students and office-goers had to brave a stop-and-go ride to their destinations on Friday even as the police diverted traffic through several arterial roads and feeder roads around the flyover.

Metro drove around the area and this is what we saw.

“It generally takes me around 40 minutes to reach my office but on Friday it took me over an hour,” said Arun Chaturvedi, who

lives in Shyambazar and drives to his office in Camac Street.

The police have put up signboards that state — “Sealdah flyover is closed from 6pm on August 15 to 6pm on August 18 for KMDA work. Take diversion”. Directional arrows have been put up to guide motorists. “We have placed adequate signage to help motorists. They have been painted in bright colours so that they can be seen clearly from a distance,” said Santosh Pandey, deputy commissioner, traffic, Calcutta Police.

Additional traffic policemen were posted at every intersections.

“We have been stationed here since 8.30am. We are trying to keep the flow of traffic as smooth as possible,” said a sergeant posted at the MG Road intersection.