More aerobridges and counters on anvil

Work is set to start on Phase I of the expansion of the Calcutta airport following the approval of the project by the Airports Authority of India.

Officials said the Airports Authority of India had recently sanctioned the master plan of the expansion, designed by Landrum & Brown, a US-based firm which specialises in aviation planning and development.

“We will appoint a project management consultant for the project. We hope the first phase of expansion will be ready in two-and-a-half years, after which the airport will handle more flights and passengers,” airport director Kaushik Bhattacharya said.

The consultant will come up with an estimated cost of the expansion.

“The second phase of expansion will involve demolition of the air traffic control building and the old international terminal. The designs of the second phase are yet to be finalised,” Bhattacharya said.

In the first phase, a building with 7,000sq m space will come up on the plot where the old domestic terminal stands. The new building will be connected with the integrated terminal in use.

“Almost the entire area on the departure level in the new building will have security hold. This is being done to avoid congestion and long queues for security check and boarding,” an airport official said. 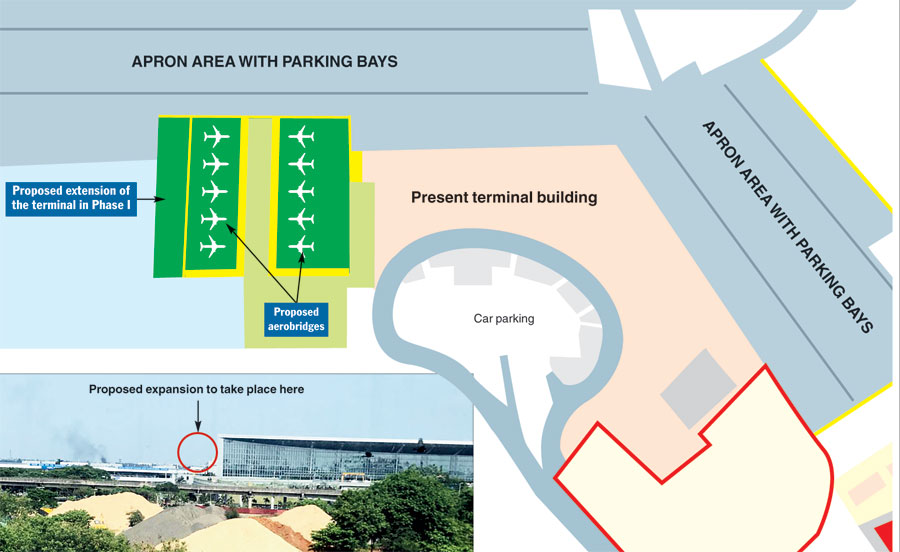 “The new facility will only be used for domestic flights,” the official said.

The airport now has 18 aerobridges, through which passengers board aircraft directly from the terminal building. At least 10 more aerobridges will be installed in the new building, which will be linked to the current terminal.

A number of boarding gates on the ground floor are also being planned for passengers who will take a coach ride to board flights in remote parking bays.

Also as part of the Phase I expansion, the airport will have 25 more parking bays — 15 remote and 10 contact bays. An aircraft parked in a contact bay can be reached from an aerobridge.

The airport now has 63 parking bays, of which 18 are contact and the rest are remote bays. 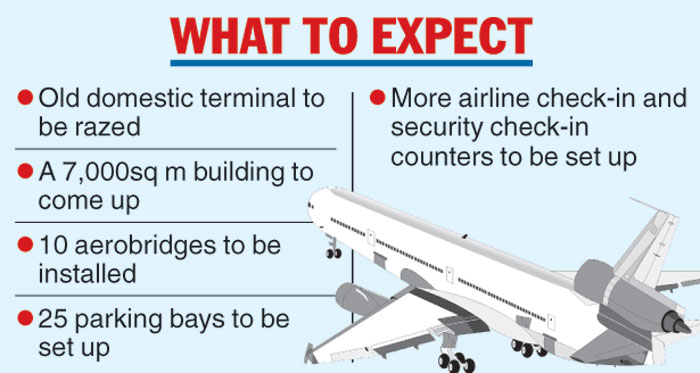 The airport has witnessed a 4.51 per cent growth in annual passenger count, officials said.

The airport has recently introduced inline baggage X-ray screening system. Passengers now don’t have to stand in an additional queue for getting their registered baggage screened through an standalone X-way machine.

However, many passengers allege that they have to stand in a long queue for security check-in, often for nearly an hour.