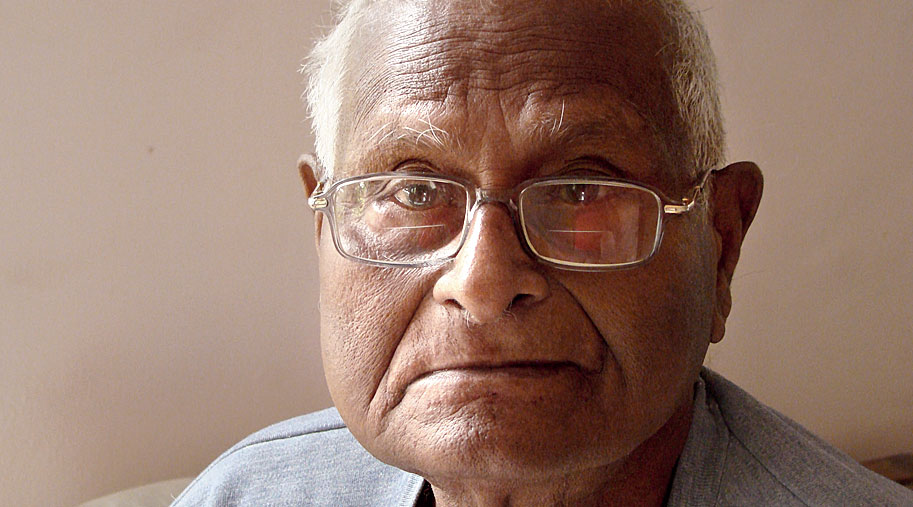 Professor emeritus Amaresh Datta, a noted scholar of English from Assam who evoked awe and respect in equal measure from his students and admirers, passed away at his Dibrugarh residence on Thursday morning.

He would have been 102 in November and is survived by his wife and five sons.

Datta was cremated with full state honours at Chowkidinghee, about 2km from his Naliapool residence in the Upper Assam town. In attendance were Dibrugarh MP and Union minister of state Rameswar Teli, Dibrugarh MLA Prasanta Phukan, Dibrugarh deputy commissioner P.G. Jha and SP Sreejith T, among others.

Glowing tributes and the heartfelt condolences poured in from all quarters, an indication of the impact Datta had on people he came in touch with.

An ex-student and former head of the English department, Dibrugarh University, Udayon Misra, 75, said Datta was the “doyen of teachers” of English Literature in the region and in his long career he “inspired” several generations of students.

Former student Kashi Nath Hazarika, a member of Assam State Innovation and Transformation Aayog and former chairman-cum-managing director of NEDFi, said, “…these rare and diminishing breed of revered teachers reflected the values of their times... simplicity, integrity, passion and sheer joy of teaching.”
Assam chief minister Sarbananda Sonowal described Datta as a “stalwart of modern education in India”.
AASU chief adviser Samujjal Bhattacharjya said the demise of the “scholar” has created a big void in the field of education.

Datta started his teaching journey at Sagar University in Madhya Pradesh in the early fifties before moving to Gauhati University from where he retired as professor and head of the department of English. He joined Dibrugarh University as head of the department, English, and moved to Delhi as chief editor of the Encyclopaedia of Indian Literature, a project of the Sahitya Akademi.

Datta was an authority on Shakespeare. His book, Shakespeare’s Tragic Vision and Art published in 1963, received appreciation from eminent scholars and critics like professors G. Wilson Knight, E.M.W. Tillyard and A.G. Stock.

His collection of poems, Captive Moments (1952), bagged an award from the International Association of Poetry in Rome. Some of his published works include Time’s Harvest and Lotus and the Cross.