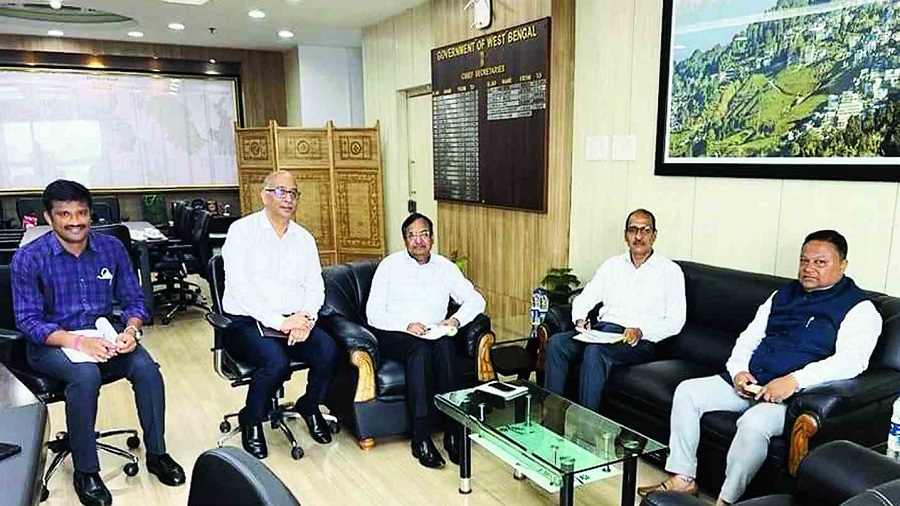 Anit Thapa with top Bengal government officials in Calcutta on Friday.
Sourced by The Telegraph
Vivek Chhetri   |   Darjeeling   |   Published 23.07.22, 01:41 AM

The Gorkhaland Territorial Administration which started a fresh innings this month has a financial liability of around Rs 670 crore, which includes electricity bills unpaid by hill residents.

“There is an accumulated liability to the tune of Rs 350.00 crore approximately,” a memo prepared for Friday’s meeting states.

This year, the GTA’s state plan budget was fixed at Rs 206 crore. Another liability is a penalty of Rs 6.6 crore the Centre slapped on the GTA for “misuse” of land at Saket in Delhi.

The Darjeeling Gorkha Hill Council and the Centre had signed a MoA in 2002 to construct a Gorkha Welfare Centre in Delhi and the same was to be completed within two years.

“However due to unavoidable circumstances, the construction could not take off. Regular ground rent is being paid by the GTA. In 2019 Hon?ble CM, West Bengal has laid the foundation stone for construction of the same. However, Govt of India has imposed a penalty of Rs. 6,65,30,201(six crores sixty-five lakhs, thirty thousand two hundred and one) for misuse of land (land not used for the purpose of which it was intended),” the GTA’s report states.

A 2.6km-long ropeway between Giddepahar near Kurseong town and Rohini tourism complex was estimated to cost Rs 16 crore in 2014. However, in 2014, there had been no provision for GST. The GTA has till date made payments to the tune of Rs 13 crore but it still needs around Rs 5.9 crore to complete the project.

The GTA has sought waiver of late payment surcharge to the tune of Rs 235.50 crore that the West Bengal State Electricity Distribution Corporation Limited (WBSEDCL) slapped on around 1,43,500 consumers in the hills.

The GTA has stated that because of the non-cooperation movement launched by Bimal Gurung’s Gorkha Janmukti Morcha from April 1, 2008, to July 2011, the consumers didn’t pay the power bills and the dues stood at around Rs 81.72 crore as on December 31, 2021. The corporation also slapped a surcharge of Rs 235.50 crore on the consumers for late payment.

The GTA has very little avenues for revenue generation. The new GTA board is hopeful that the state government would extend financial support to help start the new innings on a positive note.