Nearly 5,000 villagers have been shifted from Digha to cyclone shelters 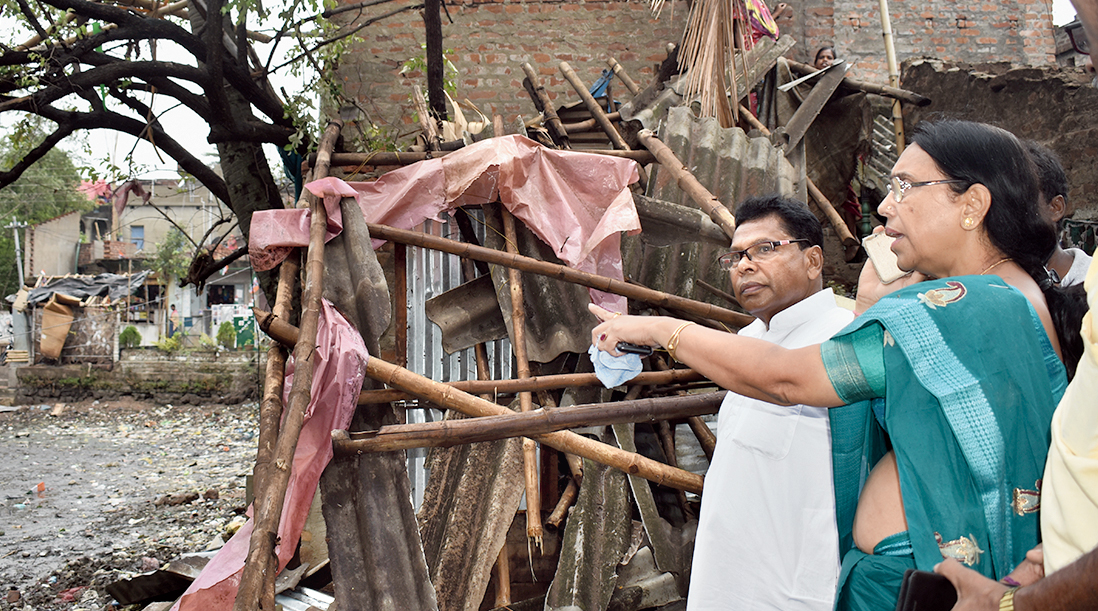 Winds and rain blew away tiled roofs of hundreds of houses and knocked scores of electric poles in pockets of West Midnapore close to the Odisha border on Friday morning, soon after Fani made landfall in the neighbouring state.

Danton, Narayangarh, Kharagpur, Salboni and Midnapore Sadar were among the areas affected, with at least 25 to 30 villages without power. In Midnapore town, close to 50 homes were damaged. Six persons were injured in Danton and Narayangarh when they were hit by parts of flying roof debris.

“Around 10am, a storm ripped the asbestos roof off our house. That is when we knew we must move to a relief camp,” said Gajendra Patra, 65, a resident of Danton, near the Orissa border.

“Those living in kuchcha and unstable houses have been requested to shift to safer places,” West Midnapore district magistrate P. Mohangandhi said.

West Midnapore zilla parishad deputy chief Ajit Maity said officials had visited many blocks following the storm. In Jhargram, dozens of trees were uprooted in Gopiballbapur and officials said 3,000 people had been shifted to camps.

In East Midnapore, a red alert has been issued in the beach resorts of Digha, Tajpur and Mandarmani, and tourists asked to leave since Thursday night.

Nearly 5,000 villagers have been shifted from Digha to cyclone shelters. “We asked all tourists to leave Digha last night and asked villagers to shift to cyclone shelters,” Ashis Kumar Ray, block development officer of Ramnagar-I, said. The Digha administration had organised a bus every 30 minutes, starting midnight on Thursday in which as many as 2,000 tourists left.

Sources in the hotel industry said hardly any tourists were left in Digha by Friday afternoon. “We were asked to vacate hotels. So we caught a bus provided by the administration and left Digha,” said Animesh Dutta, who returned to Bansdroni in Calcutta from Digha with some friends on Thursday.

Police officials said the entire beach in Digha had been taken over by National Disaster Response Force (NDRF) personnel and civil defence volunteers since Thursday night.

In Shankarpur, a village 14km east of Digha, an electricity pole and many trees were uprooted by winds. Huts were also damaged at Nandakumar and Deshpran blocks near East Midnapore’s Contai.