Since the damage was spotted, irrigation officials said they set up a temporary barricade with sandbags to stop water from flowing through the damaged gate 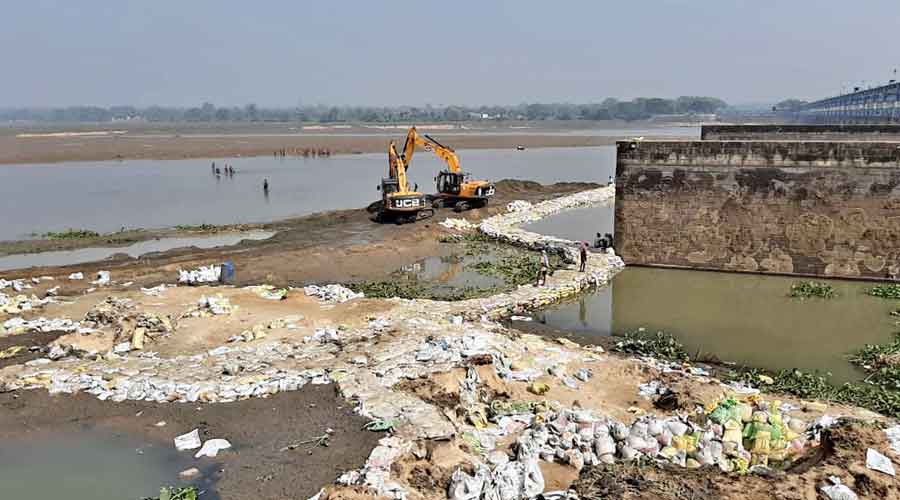 An earthmover and sandbags on the site of the damaged Durgapur Barrage on Monday
Swapna Barua
Abhijeet Chatterjee   |   Durgapur   |   Published 03.11.20, 03:13 AM

Irrigation department engineers are yet to start repairs at Durgapur Barrage even 48 hours after sluice gate No 31 got bent, causing water to gush out to lower catchment areas and leaving the upper areas almost dry.

The incident has triggered a severe water crisis in Bankura and Durgapur region and threatens to halt power generation in four plants.

Since the damage was spotted on Saturday, irrigation officials said they set up a temporary barricade with sandbags to stop water from flowing through the damaged gate. “We need the area to be dry for the work,” said an engineer.

But the area is not dry. Irrigation officials said the Damodar Valley Corporation (DVC) stopped releasing water from its two dams in Maithan and Panchet in Jharkhand but rivulets linked to Damodar in Asansol and Bankura were posing a challenge. “Natural rivers cannot be stopped and we are trying to set up a temporary barricade cordoning off the damaged gate with the help of sand bags and mud on the river bed,” the engineer said.

Five earthmovers and over 100 labourers were put on the job. Engineers from SAIL’s Durgapur Steel Plant also joined the effort with irrigation department engineers.

“We will start restoration (work) once we manage to make the gate area dry. Once it starts it will require at least 15 hours,” said Sanjay Singh, chief engineer of the irrigation department.

On Sunday, Naveen Prakash, additional chief secretary of the irrigation department, had said work would be over by Monday. However, engineers on Monday evening were still struggling to stop water from reaching the damaged gate.

A source in the irrigation department said the gate’s repair would not ensure immediate water supply.

“It would take at least 24 hours — if not more — for water from DVC’s Maithan and Panchet dams to reach the barrage after the gate is fixed,” the source added. “If we can start work on Tuesday, we don’t expect the situation to improve before Friday night,” he said, adding they needed to keep the repaired gate “on observation”.

An irrigation department official blamed lack of maintenance for the damaged gate. The official said subsequent state governments did not overhaul the iron sluice gates ever since the DVC had handed the facility over to the state administration in 1965.

A source in the irrigation department said heavy siltation at Durgapur Barrage lowered its capacity to hold more water released from dams. He said silt and stored water combined to create huge pressure on the gates, weakening them.

Prakash on Sunday had also said the government would replace 11 gates of the 34 gates and repair the rest, but the process would take time.

Around 5am on Saturday, employees of the irrigation department of the barrage noticed during inspection that sluice gate No 31 got twisted and water reserved in the upper catchment of Damodar river gushed out to the lower catchment areas in East Burdwan, Hooghly and parts of Howrah. Feeder canals, which supply water to treatment plants of Durgapur Municipal Corporation and public health engineering (PHE) department of Durgapur and Bankura, turned dry.